How to design an effective polearm-bow hybrid?

Full disclaimer : I acknowledge full well that in real life hybrid weapons are completely silly and impractical but I'm currently writing a fantastic-ish story where power fantasy is a key element. This hypothetical weapon will be more of a trick / makeshift weapon rather than a replacement o conventional polearm and bows.

Since there is a structural limit to how much weaponry a humanoid can successfully store on one's body without completely removing mobility,agility,speed, nimbleness. How would one design an effective or at the very least a decent polearm-bow hybrid? I was initially planning on having my heavily armed men carry a spear (2 parts, 1 hard-point to attach into a long ranged spear) + bow + quiver & arrows + throwing knives + a backup sword + smoke pellets or canister + boomerang + cable wires + 2 wrist mounted shields... But let's be brutally honest even with rule of cool factored-in that's just downright silly/ ridiculous and comically so. So now I'm trying to make compromises on rule of cool and semi-plausibility, which is why I'm trying to design/find shortcuts to keep my fictional soldiers as mobile/agile as possible without completely disregarding the fantasy element here.

You don't. It's not merely impractical, it's straight-up impossible. A bow and a polearm require contradictory properties from their structural materials.

However, you can do something functionally quite similar. If you are not set specifically on having a bow, as opposed to merely some sort of high-power ranged weapon, then you can quite easily combine a polearm and a staff sling--basically, a small, human-powered trebuchet.

All that is required is a slight modification to the head of the polearm to include a sling-release hook at the end. The sling itself is basically just a bit of thin, knotted rope, which can be wrapped around the shaft when not in use, or just stuffed in a pocket--it is neither bulky nor heavy. And you always have the option of using the sling on its own if you like.

Suitable sling bullets are also considerably easier to source than decent arrows, which reduces the armory supplies you have to lug around with you, and eliminates the need to try to retrieve valuable arrows after a battle.

You change the bow to a crossbow.

The bayonet turned a firearm into a useful spear. You could start with a crossbow with a long shaft, like the ones in Central Africa... 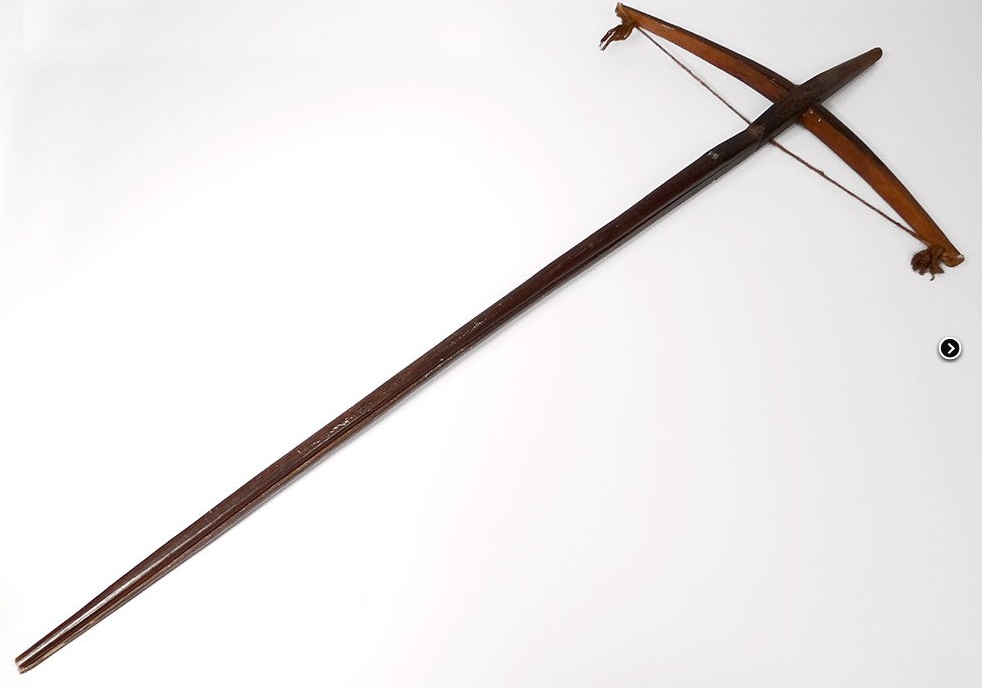 ... and just add a bayonet to obtain a spear.

Such strange hybrids are common in fantasy (I think D&D had them), but also in reality 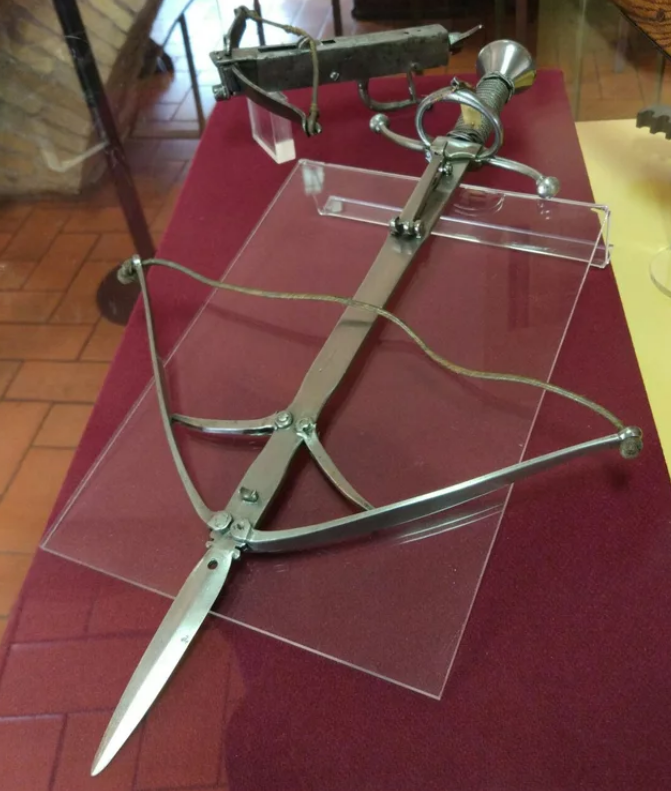 Put a metal tip on the bow, to make the bow a light spear.

Thus, if the archers have a make-shift polearm to defend themselves, once they run out of arrows or they are directly attacked.

There were bows found, which had an iron point on one of the ends of the bow. One theory for the metal tip is that the bow would serve as a walking stick, with a reinforced tip, when unstrung.

A paper on a find in Altdorf, Switzerland

The German Wikipedia on the history of the bow, section migration period

This site shows a replica

I usually take "low-fantasy" to mean either No Magic or Very Little Magic, if you're going for a purely No Magic setting then Logan's answer is on the money, a bow and a polearm require the exact opposite qualities in the wood they're made of to function effectively. I your setting allows a little magic you may have a wood that has those diametrically opposed qualities. In this case the wood needs to be springy when pressure is applied across the grain, making a good bow, while remaining rigid when compressed parallel to the grain in a stabbing situation, thus also making a good spear, natural real-world wood doesn't do this but magic wood could. Or the spear could be enchanted to be bow-springy when the bowstring attached to it is pulled while being made of highly rigid wood that normally doesn't flex.

English Longbows with draw weights of over 100 pounds (war bow draw weight) are very sturdy. When unstrung, they are very straight and very stiff and are around six feet in length. They are much more sturdy than a Bo staff which are known for being very flexible. If you add a small metal spike or spear point on the ends you would have a very effective spear which would have greater reach than most swords and axes, and be nearly on par with the reach of most polearms. It wouldn't take much to quickly unstring the bow to turn it into an effective short spear if you get rushed by the enemy. It wouldn't be a stretch to have a longbow be used as a polearm so long as there are equivalent weights added to both ends to prevent malfunctions when firing arrows. Be sure the spear-heads are small and light to make sure it doesn't interfere with the kinetic energy being added to the arrow.

Look closer on peltast greek warrior. They had almost what you want - throwning spear with slung-alike way of throwing. This spear was still good enough as a polearm - peltast could form sort of weak phalang (against other peltasts or barbarians).

Or you may look closely to spear-thrower, wich obviously can be crossed with any polearm of your choise.

Or you can just attach a knife to a japanise non-simmetriacal longbow. It would be a terrible polearm (wich requre a lot of training just not to brake it), but not-so-bad bow.

Your polearm is hollow, making it a blow gun. you can now throw darts in seconds after beig engaged and then fight with it. On the bad side, you will need to tend your weapon after a fight, or it won't stay accurate, because hitting blowguns perpendicularly will alter them. It also won't be that effective against armor.

Your polearm is hollow and contain a big knot at at least one end of it, with a spinned rope. the torsion is the elasticity source you are searching for. instead of bending the bow, you just have a rubberish rope. If you want it to be accurate (not this much, but accurate enough to it a cow at 5 meters) you will need to have the 2 ends with the same elasticity.So not good for long distance shots, but it will have some punch to it, if you have enough force to place a specially designed rope hooked to both knots.

So if you are facing light armored enemies, the blowgun will help engaging from afar, especially if you allow poison or explosive darts in your universe, but if you want to pierce an armor, you will need to resort on a makeshift elastic, which will loose strength with time, will suffer from humidity, etc... But is the best way to get a polearm to act as a bow without destroying its polearm capacities.

So not that good anyway, but hey, that's what was asked.

The item which you seek is called a Ballista.

It is a large bow on wheels that fires varied projectiles, including spears, which are a polearm. You fire the ballista like a bow at range, and if they get close, you grab one of the projectiles and you have your shortspear for close range.

Without magic or Tony Stark metalsmiths, it is hard to imagine a combo-spear-bow.

But, what about a collapsible/multi-part bow that doubles as a backpack frame for all their gear.

It lacks any cool factor but might keep the weight down

A literal hybrid might do the trick... a thinnish polearm bound top, bottom, and center to a simple longbow.

Bound together longways, the two staves effectively form a single stick... possibly a little weak or bendy if hit just wrong, might need to be thicker to compensate, but it should work as the handle of a polearm.

To use as a bow, you’d need to loose the ties at the top and bottom of the staff, and bend the bow away from the polearm shaft. I recall reading bows (some bows?) would be made so they’d curl forward when strung (curled opposite the string when at rest), a very minor opposite curve would hold the two pieces of wood together more easily and have less tension on the ties. The middle can remain bound, it’s just a grip... the polearm will be held upright parallel to and in front of the bow, so aiming will be trickier but one could also use the pole-staff as a rest to steady or figure bow height. The end ties need to be both reliable and quick to loose, might take a bit of figuring, but I think it can be done.

I planned the bow around a staff, since it was simpler to imagine... attaching anything would be tricky and leave the wood weak right at the attachment point if not carefully crafted, but a spear point etc should be doable if the wood is fit together well at that point.

Yes, it can be done, but the level of craftsmanship required will make it impractical for mass production. It will have to be a specialists weapon, with the majority of each squad having conventional pole arms while one marksman carries this hybrid.

Also, it will be closer to the function of a crossbow rather than a conventional bow. Tactically, that means that from a distance the marksman can fire and then reload quickly for another shot, but once close combat is engaged, there will be no opportunities for reloading. In face-to-face melee, you will only get one shot.

The design of the bow portion of the weapon involves hollowing one end of the pole and turning it into a tube to hold the arrow. The bow's wings will project out perpendicularly from the tube, but will be mounted backwards such that they fold forward (towards the tip of the tube-enshrouded arrow) when the bow string is drawn. The bowstring itself will be drawn down into the tube down past the arrow's feathers and held by a hook which can be sprung crossbow style, by pulling a trigger mounted near the middle of the pole's length.

The arrows will be slightly different than conventional design, having feathers running all the way up to the tip. These feathers serve the additional function of holding the arrow centered within the tube which greatly increases the weapon's accuracy when fired.

When cocked and loaded, the bow wings of the pole arm bend down to meet the arrowhead. When in this position, the outer facing edge of these wings are sharpened such that the wings and arrowhead join together to form an over-sized spear point. Stabbing someone with this giant spear and then pulling the trigger would cause a sure-kill wound as the sharpened blade wings swung out in opposite directions, cutting through flesh with brutal force.

25
A more powerful bow
12
Supersonic bow and its wielder
1
A bow and arrow ..IN SPACE!
1
Thousand pound steel bow?
22
Designing a magic-compatible polearm
4
Fantasy Air-Ship Design
7
How effective would a pole-arm blunt weapon be?