A violent way of rendering a planet uninhabitable being the obvious: accelerate a large enough object to a sufficient velocity that everything on the planet goes the way of the dinosaurs.

Put briefly, an alien race secretly constructed a series of autonomous spacecraft that would go to other solar systems and snuff out the inhabitants without them ever realizing they were under attack. The way that comes to mind, broadly speaking, is something relatively slow acting and environmentally based, such as inducing a star to start CME-ing the crap out of the planet (not that I really know how exactly you'd go about doing that) and strip its atmosphere. At the same time, it preferably shouldn't take a million years; you want it to be slow enough to be chalked up to some nasty natural phenomena, but quick enough to kill everything on the planet (or merely drive them out).

The tech level I'm working with is pretty darn advanced. While the alien weaponmakers can't use the power of handwavium to crush everything before them, if it's physically possible, they can (probably) find a way to do it.

tl;dr, what are some plausible ways to strip a planet of its ability to support life without the locals figuring out they were being targeted?

Edit: Changed title to subtle. D'oh. The comment pointing that out is right; killing things is violent regardless of whether or not you're shooting them or poisoning them. As for the tech level of the target planet, they're interplanetary, but an order of magnitude less advanced than their attackers. The aim is to destroy the sentient life only, but if that's too tricky, the aliens are more than willing to just kill everything. They'd just prefer not to.

Ways to destroy sentient life on a planet:

That's just off the top of my head. Given time I'm sure I could think of some more. Society is actually pretty danged fragile. It's why how to keep everything running has always been such a problematic question, while how to kill everything is always so simple.

Infiltrate the planet's early societies and teach them about money. Steer the societies into loving it. Change their genes to make them hoarders and cheaters.

As soon as those societies reach the industrial age they will start destroying their own ecossystems in search of profit. Since there is more money to be gained via destruction than conservation, the process will be irreversible and at some point the planet won't be able to support complex life on its surface anymore. Just chillax and watch for a handful centuries. The inhabitants of the planet will live their last decades like: 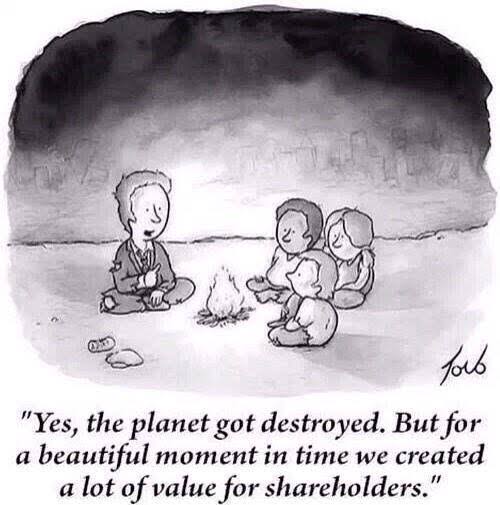 Destroying all life is easy - slowly crank up the sun's temperature until you bake the planet.

Adapting to new circumstances is what intelligence excels at - it's pretty much the whole point of intelligence. While it's pretty easy to disrupt a society over the short term (revolution, war, famine, plague, economic collapse) the survivors will find a way to bounce back unless you hit them with enough force to kill all less-adaptable complex life as well.

In fact, there is only one way I can imagine destroying all intelligent life on a planet without destroying everything else as well, and that is to make them voluntarily take the means of destruction upon themselves.

So how might an advanced alien race accomplish this? By giving them seemingly beneficial, ubiquitous technology that will later be used to kill them. Medical implants that will administer a poison to everyone when exposed to a worldwide signal, for instance.

Of course, even this is a dubious method. There will always be traditionalists who refuse the technology, but the more beneficial the technology seems, the greater the percentage of people who take it in will be. Once the vast majority are dead, you can send drones in to mop up the survivors (who will probably be less technologically inclined than the ones who died, since they were the ones who refused the beneficial technology in the first place).

Here's a new and really insidious one:

Approach them with big smile and offer them a "happy-machine". It hooks up directly to their brains and stimulates all the pleasure centers and whatnot. Along the way, cure mental diseases with the same tech. Instant happiness for everyone who wants it, for as long as they want it. Purely voluntarily, of course. And no negative side effects!

Of course such immense pleasure is by its very nature immensely addictive and people will demand more and more of it. Anyone who has ever tried it will want it again, because nothing else in life can quite compare to it.

Then offer the next level - immortal pleasure pod. Your brain is removed from the body and is placed in a pod where the life support systems basically guarantee your immortality, plus infinite pleasure, of course. You can still stop the trance and communicate via the pod's eyes and ears if you want to, thus convincing your friends and family that it really works and is worth it.

In a while, it will become increasingly silly not to get into a IPP, so everyone will get one.

At that point - checkmate. Although you really won't need to do anything, because everyone will be in an eternal happy trance anyway and won't care what happens to their planet.

Pump extra CO2 into the atmosphere, and seed some ideas into anti-capitalist intellectuals that man is causing all the global warming.

No matter what we do, the temperature keeps on warming and blaming each other for the problem. Sooner than later, food production will start to fail, wars for resources will happen, nukes go off and everything dies.

Reduce the amount of carbon dioxide in the atmosphere. The planet goes into a "snowball earth" global cooling episode where the whole planet is covered in a miles thick layer of ice. Given the current level of hysteria over global warming it would not be difficult to convince humanity to participate in this. "Hey our carbon sequestration scheme is going really well".

The only life that will survive that is some cryophile bacteria and life around the ocean volcanic vents. This has the advantage that it does minimum long term damage to the oceans and atmosphere.

When the planet has been sterilized reintroduce Carbon Dioxide and the planet warms up again ready for occupation.

26
Making a Planet Seem Uninhabitable
10
Giving a Planet Sunburn
14
Junkyard planet trash distribution?
2
How might a slow fire energy weapon reliably neutralize its target?
25
Need a specific event that wrecks the surface, allows the race to survive in bunkers, and affords an aftermath suitable for them to rebuild
6
Making the God-Hand Make Sense
10
Cancer activated by certain thoughts
36
How Would Civilisations on Different Planes of a Cube Planet Interact?
11
Trying to survive a passing neutron star by burrowing deep in the planet's crust?