What would transhumans developed to live on dark, cold planets look like

I’m envisioning a setting in which human beings have altered themselves significantly to be able to live on alien worlds without significant terraforming.

One type of transhuman needed would be one that could live on extremely cold, often dark planets, moons, or areas of planets - like Mars, Titan, or the dark side of a tidally locked planet.

What adaptations would be needed for a humanoid creature to survive, even thrive, in the temperature range of -50C to -200C (I’m aware that’s an enormous range, but you could have subspecies for different subranges of that) and in very dim lighting (even pitch black).

I initially thought infrared vision, but I’m not sure how useful that would be when it’s so incredibly cold. SONAR, perhaps? What else would be useful or necessary to survive in such environments?

I'm assuming they are going full native here, and not just adapting to limit their reliance on technology like shipping in resources from other planets etc.

Vision: Eyes will be pretty much useless, as they are primarily reliant on external light from the sun. Even if they are made to see infrared, they will only be useful for seeing other lifeforms (emitting their own heat), but not for seeing the surroundings.

Some kind of spacial "vision" is needed, in your case something similar to bats echo location would probably be useful. This is of course only if there is some kind of atmosphere, otherwise they will need some kind of active radar system.

Heat: Extreme insulation would also be needed, that being thick, water resistant fur of some kind, greatly increased body heat generation would probably also be useful, to counter any heat lost. As above, assuming some kind of atmosphere, fur is useless without it, and you would then need what is essentially a biological spacesuit.

Breathing: Air is going to be a problem, oxygen becomes a liquid around −182.96 °C, so there's gonna be a whole lot of problems with having air to breath. (not to mention the heat loss from the respiration. Your probably gonna have to solve that one with them having some kind of oxidizer they can ingest, and completely bypass the whole breathing thing.

Energy: On earth we sort of live off derived sunlight, in the sense plants get energy from the sun, animals eat plants and take some of that energy, and we eat animals and take some of their energy. So with an extremely dark and cold environment, you don't really have a whole lot of energy floating around. There will be no plants, and very few animals if any to eat (they too would be bio-engineered).

A normal sized red-colored human with red skin, with light producing organs, with antifreeze proteins with a form of sonar recognition.

Background: The coldest known animals are microbes that have adapted to frozen temperatures and ice. These microbes, known as psychrophiles are the most likely life-form that is envisioned to live on Mars due to being able to withstand temperatures that would kill a human in less than a second. Insulation is not necessary as organisms that thrive in extreme conditions are not necessary reliant on "fat". Fat cells store water and freezing is a big issue because it can cause cell rupturing in the expansion process of freezing and thawing.

Some features that allow for extreme cold and UV Radiation to thrive:

Antifreeze Proteins - Freezing water is lethal to any normal cell, but having antifreeze protein chains in the blood can theoretically help humans survive. These antifreeze essentially function by binding to microscopic ice crystals to prevent them from clustering together. Modern knowledge on bacterium antifreeze shows that they can live in conditions up to -18°C. The premise you have contrived can draw upon the idea of antifreeze proteins in humans.

Trehalose - a sugar consisting of two molecules of glucose allow for plants, fungi, and animals to survive without water and survive freezing. It does this by prevent cracking forming in its cell membranes due to freezing and thawing conditions. The most extreme on planet earth has this sugar as a building block in its cell membrane, the nematode, Panagrolaimus davidi can withstand temperatures as low as -80°C.

The red pigment, astaxanthin. - This is the science behind "watermelon snow" a phenomenom in high altitudes where an algae is red. This algae survives in freezing temperatures and resists UV Radiation. Planets such as Mars have an atmosphere that is devoid of a protective atmosphere—meaning that Mars is exposed to much higher levels of radiation than Earth, all while experiencing lethal blasts of strong solar flares and cosmic rays. Having a red skin color with astaxnthin pigments can help survive in high UV environments such as those on the condition in the planets described.

Since the most common and largest living spaces in the Solar system (and if conditions are similar elsewhere, then in the galaxy) are oceans hidden under the crusts of ice moons, then the most common post human adaptation would be to become fully aquatic beings living under the ice in these oceans.

The first condition to solve (and actually the easiest) is to invoke the "square cube" law and create large, blubbery whale like body forms for post humans. Tweaking the hydrodynamic form so the body is more spherical or "football" shaped than long and cylindrical improves the ratio of surface area to volume in order to minimize the flow of internal heat to the cold, exterior oceans. 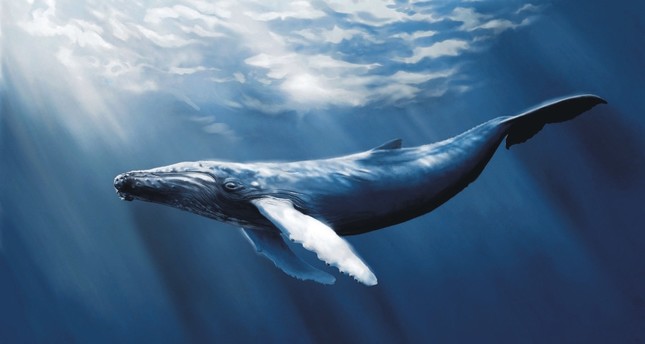 Manipulating organs like arms and hands would have to be withdrawn into the body when not in use in order to minimize heat loss. Similarly, other protrusions such as antenna or sonar or chemo sensors would also have to be internalized somehow, only extending as much as necessary and only when necessary. Energy management would have to be a critical resource for the post humans.

Since there will be little or no light, bio luminescence will have to be incorporated in the genetic design. In tune with the basic survival rule of minimal surface area, the skin of the creature will have to be the organ which provides the light, rather than some sort of "lantern" like deep sea anglerfish.

The last critical item would need to be finding ways to provide the necessary energy for post humans to survive and thrive in these environments. Since the oceans are dark, photosynthetic plants and the conventional food chain would not be possible. However, the reason these moons have oceans in the first place is because they have internal heat sources, generally though gravitational "kneading" between the huge gas giant primaries and the resonant orbits of smaller moons in the system. This energy source will endure for geological ages, so the civilization is not totally dependent on artificial energy sources. Biologically speaking, the geothermal actions in the planetary cores provides energy to create the equivalent of "black smokers" injecting chemicals into the oceans. Post humans living in these environments will be using chemosyntheses in order to gain the energy to live, or more likely create entirely artificial genetically engineered food chains and ecosystems to enhance their environments. 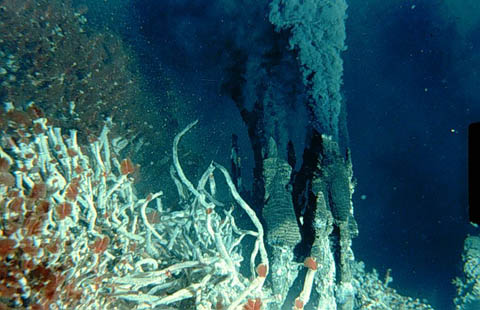 Hydrothermal vent. This would be the oasis where life would radiate from

As for intelligence and communications, the post humans would adapt the tools of whales and dolphins, especially the organs used to create and focus sound waves for communication, sonar and other tasks (post humans might enjoy hunting by using the sonar organs to herd and stun prey).

So post humans, seeking to colonize the largest and most common living volumes available, will engineer themselves into beings similar to whales, and with adaptations to meet the particular challenges of living in cold, dark oceans.

Light is too useful to intelligent life to trade it for an inferior information gathering source such as sonar. Your cold-dark folk might have sonar but it is not necessary. What is necessary is bio-luminescence. They should be able to give off enough light to walk across a pitch black landscape safely.

Heat is also pretty useful to higher life, so the rest of your cold-dark folk's biological blueprint should be focused on heat retention. Let's give them a thick hide made out of an as-of-yet undiscovered insulating substance which exceeds our best space suits yet remains lightweight and flexible.

Sealing up every orifice to retain heat is a must, but doing that we loose breathing, eating, waste disposal and most importantly, the spoken word. If we can give them flicker control of their bio-luminescence, they will work out a light-based language for themselves. Between that and sign language, they should be able to communicate.

Your cold-dark folk are going to need warm lairs where they can unseal themselves to take care of bodily functions. I would suggest they heat those homes using the radioactive elements they mine from their cold world. Radiation is the only potential energy source that I can think of in that barren environment. They better get pretty comfortable with it. At a bare minimum, they will need a highly redundant genetic code with a constantly active checksum repair mechanism. Their DNA needs to be able to fix itself quickly and accurately over a lifetime of radioactive exposure. They may even need the ability to consume radioactive elements for fuel. Either that or they are going to have to eat each other since nothing else edible will be able to live on their worlds.

At this point, there better be a really good reason for their needing to live on such a world. I can't imagine anyone submitting themselves or their unborn children to that level of bio-engineering and its' resulting isolation from the rest of humanity. To be honest, isolation is an understatement...

Such a life form would hardly be (trans)human at all.

In The Singularity Is Near Ray Kurzweil predicts that computers will reach the complexity of the human brain by 2050. It think he is overly optimistic. It will take far longer. But it will happen one day, and then there will be no difference between humans and machines. In fact humans will probaly fuse with machines and continue evolving, and eventually will discard their biological bodies.

So your question can be reformulated: Will computers and machines be able to operate in a cold environment?

Sure they will. They do it even today. Look at the space probes.

Not the answer you're looking for? Browse other questions tagged biology xenobiology trans-humanism or ask your own question.