I'm just trying to write a RPG adventure for a sci fi company. So when I have to figure out what kind of orbits, masses, major axis, etc are needed for the system I need to design and I see:

Yeah, that's not going to work. I need a tool so that I can design a binary system with a planet orbiting a dim star that in turn orbits a bright star in its habitable zone and this planet is eclipsed by its dim star 6 earth months out of every 24 earth months, approximately. And still be in a habitable zone.

Anyone have one where I can input masses and distances trial and error until I get the results I need?

Better than that; there's a game that will do it.

Steam has a game called Universe Sandbox where you can line up different planets, stars, et al with different masses and trajectories. I've never tried it but as I understand it the game is capable of simulating the orbits of planets, stars and the like in a way that you can graphically see the results.

In point of fact I believe there are a couple of celestial simulation games on Steam but this is just one that appeared in my discovery queue one day and I remembered it. Have a look for yourself but I suspect that this would solve a lot of your issues.

The arrangement you wish does not seem feasible.

If by "dim" star you mean a star that is dimmer than our sun, you are probably thinking of a red dwarf. Such stars are thought to be far from habitable, because:

If that is not discouraging enough: if a binary system has evolved in a way that has caused one star to be much brighter larger than the other, then it is most likely a semidetached system. That's because in general bright stars are young, dim ones are old (this is a very base supergeneralization), and if two stars close to each other have different ages, they most likely have formed in different zones and are probably not orbiting each other. For them to orbit each other the younger, most massive one should capture the older one, and such captures are more likely to happen at the galactic core (because you can't capture alone, you need a third body and that's where you find a lot of stars in close space) - where excess radiation is hazardous to life as we know it. So, if two stars are orbiting each other and one is much brighter than the other, they probably formed together and evolved to be like this: 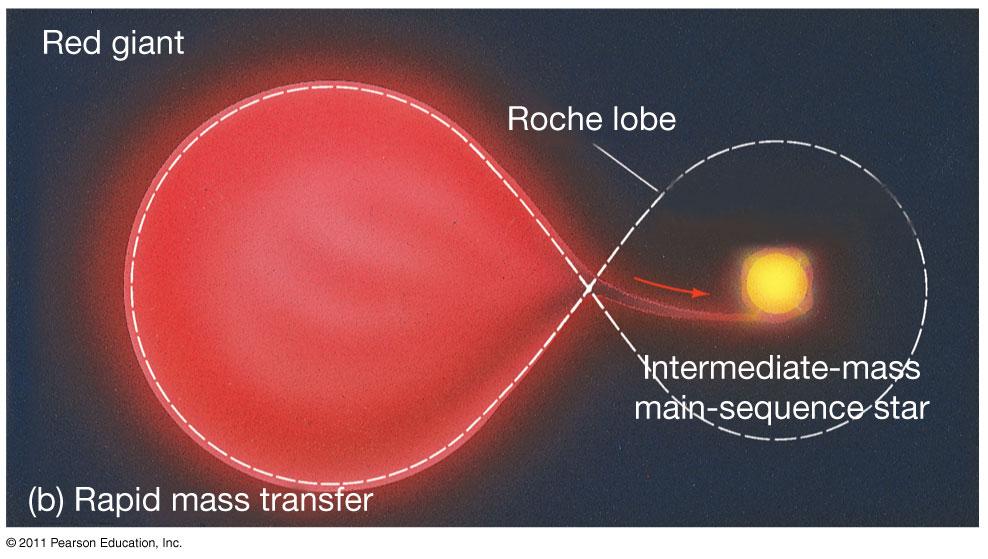 The dimmer one in this case is the one to the right. The one to the left is colder, but its sheer size gives it more shining area, and therefore more luminosity.

This does not bode well for your planet. If it orbits in a plane that allows for an eclipse, it will cross the mass transfer stream when it forms. That will either decellerate the planet into crashing onto the smaller star, or fling it away from the binary. But not without causing it to be torn apart first. Not from the collision, but due to gravity!

In your previous question about six-month periods of darkness, I gave you an answer which I think is far more feasible and which does not depend on a binary system. I think you should consider that one.

5
What could cause a planet to be in shadow for a 6 earth month period every couple of earth years?

5
Can this planetary system remain stable?
2
Could a habitable tidally locked planet have a day and night cycle caused by the eccentricity of its orbit?
4
Habitable planet in a multistar system
5
What could cause a planet to be in shadow for a 6 earth month period every couple of earth years?
1
Would it be possible to have two planets in a synchronised orbit?
1
What are the upper and lower year lengths for a habitable planet of 40 Eridani A?
6
What are good lower and upper bounds on year length for habitable planets?
2
What will be solar eclipse on a planet with two Suns, no moons and tidally locked to one sun?
4
Day/night cycle and tracking celestial positions in S-type binary star system