The North Star in the ancient world sky

Question: Would a modern-day teen, trained in using the north star for directions when camping/hiking, notice a difference in how the "north star" (Polaris) works when transported suddenly to 1350 BCE?

My novel has children (up to age 14) from the Southwestern United States in 1995 time travel to Ancient Egypt (and later the Sinai Peninsula) around the time period 1350 BCE. They are being looked after by local people and they join them on the Exodus (yes, that one) out of Egypt. The modern-day kids don't have to actually navigate, but some will try to figure it out anyway.

Basic constellations are common knowledge among American schoolchildren, especially ones like mine who do not live in an urban area. I expect most of them will know about the North Star (with at least a couple of them knowing how to find it). Some of my characters are boy/girl scouts and, speaking from my own childhood training, would have learned how to find and use the North Star for directionality and travel. Others may have learned from family campouts, summer camp, or just from other children/adults.

The North Star, however, has not always been the one we know, Polaris. Axial precession is a very slow process but one that will be relevant for the time period I'm looking at.

A consequence of the precession is a changing pole star. Currently Polaris is extremely well suited to mark the position of the north celestial pole, as Polaris is a moderately bright star with a visual magnitude of 2.1 (variable), and it is located about one degree from the pole, with no stars of similar brightness too close.

The previous pole star was Kochab (Beta Ursae Minoris, β UMi, β Ursae Minoris), the brightest star in the bowl of the "Little Dipper", located 16 degrees from Polaris. It held that role from 1500 BC to AD 500. It was not quite as accurate in its day as Polaris is today. Today, Kochab and its neighbor Pherkad are referred to as the "Guardians of the Pole" (meaning Polaris). (ref) 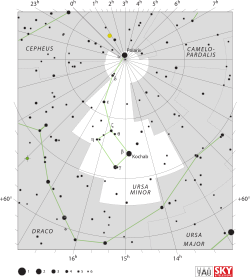 The night sky is a huge big deal in low-artificial-light areas, so everyone will notice it and talk about it. It will become an even bigger deal when they leave Egypt and enter the Sinai Peninsula and people are trying to figure out where they're going. So no way will my characters (ancient and modern) not talk about this.

The short answer is: Yes, they absolutely would notice a difference. As you noted, Kochab was the closest star to the North Celestial Pole during the time you mentioned, but even so, it wasn't near enough to be an actual pole star. In fact, Kochab never gets closer than 7 degrees to the NCP, which is about 14 full moon widths.

The simulated skies would appear as the left side of the image below:

As you can see, there is no pole star at the time you mention, and even though Kochab is close, it's still much farther than Polaris is today (Polaris is actually the second-best pole star after Alpha Draconis over the Earth's 26,000 year cycle, we're all just lucky to be born today).

Anyone staying put and watching Polaris during the time would find that it moves in a circle around the NCP, but that the pole itself would be dark.

Naively attempting to use Polaris or Kochab as a navigational aid would cause them to travel in a Northwesterly arc, rather than due North, as the stars moved around the pole, but so long as the person knew that Polaris and Kochab were not directly on the NCP, they could still use them to navigate.

So yes, they would notice a difference if they were paying attention, but if they just found themselves there at night and didn't know they had been transported 3000 years in the past, or didn't think to account for stellar drift, they could get lost simply trying to use what they know about stellar navigation today.

Another problem they might find is that the sheer number of stars away from light pollution makes it a little difficult to find your bearings. This is something I noticed myself when I went from a highly light polluted sky to a sky completely devoid of light pollution. Despite being an astrophotographer, I had a lot of difficulty picking out the skymarks and constellations I normally would have no problem finding in the suburbs. Unless you've been under a completely dark sky a few times, it's very easy to get overwhelmed.

If you look at movement of the stars at night, it looks like all stars circle around Polaris. That's because it is very close to the axis of Earth's rotation.

The same wiki from which you took the image in the question also says:

In 3000 BC, the faint star Thuban in the constellation Draco was the North Star, aligning within 0.1° distance from the celestial pole, the closest of any of the visible pole stars. (...)

During the 1st millennium BC, Beta Ursae Minoris ("Kochab") was the bright star closest to the celestial pole, but it was never close enough to be taken as marking the pole, and the Greek navigator Pytheas in ca. 320 BC described the celestial pole as devoid of stars. In the Roman era, the celestial pole was about equally distant between Polaris and Kochab.

Then we go to Beta Ursar Minoris's wiki, and it says:

From around 2500 BCE, as Thuban became less and less aligned with the celestial north, Kochab became one pillar of the circumpolar stars first with Mizar, a star in the middle of the handle of the Big Dipper (Ursa Major), and later with Pherkad (in Ursa Minor). In fact, circa the year 2467 BCE, the true north was best observed by drawing a plumb line between Mizar and Kochab, a fact with which the ancient Egyptians were well acquainted as they aligned the great Pyramid of Giza with it. This cycle of the succession of pole stars occurs due to the precession of the equinoxes. Kochab and Mizar were referred to by Ancient Egyptian astronomers as "The Indestructibles" lighting the North. As precession continues, by the year 1100 BCE Kochab is within roughly 7° [SIC] of the northern celestial pole, with old references over emphasizing this near pass by mentioning Beta Ursae Minoris as "Polaris", relating it to the current pole star, Polaris, which is slightly brighter and will have a much closer alignment of less than 0.5° by 2100 AD.

This change in the identity of the pole stars is a result of Earth's precessional motion. After 2000 BCE, Kochab and a new star, its neighbor Pherkad, were closer to the pole and together served as twin pole stars, circling the North Pole, from around 1700 BCE until just after 300 AD. Neither star was as proximitous to the celestial north pole as Polaris is now. Today, they are sometimes referred to as the "Guardians of the Pole."

So from these, we can infer that:

It will still be easy to find the North through the stars. Here in the south the star closest to Earth's axis is very far from it, and yet we manage :)

Not the answer you're looking for? Browse other questions tagged time-travel astronomy ancient-history navigation .

9
How to calculate rate of axial precession?

14
Ancient culture which has been visited by aliens
9
The Rollercoasters of Ancient Egypt
13
How would living at a pole affect mapping and navigation?
12
Figuring out the Cosmic Compass (Updated)
37
What non-electrical, basic tool from today, could be made that would change the world in ancient times?
16
Viability of a mega star system
5
Dropping into a new star system: how would you set up a frame of navigational references for use at planetary distances?
1
Two celestial bodies tidal locked - not with the sun