I was inspired by Karl Niklas who used computer modeling to simulate the ideal structure for a tree when different traits were favored. Here is a chart summarizing his work: 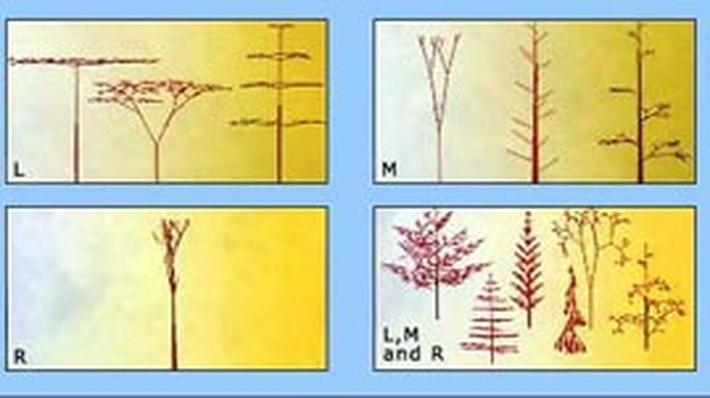 When he combined them all, his model yielded trees that closely resemble trees in the real world, with enough of each trait to survive and reproduce.

From this point I wanted to take things to a more extreme angle. I want to have trees that are shaped like a dodecahedron: 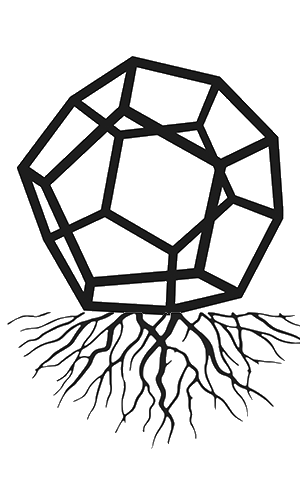 If we take the point from Niklas' research that trees take a shape that helps them best survive given what the environment deems favorable traits, then what kind of a world do I need for a dodecahedron tree to be deemed favorable?

Trees are remarkably bloody minded in their growth patterns, since their greatest influencing factor is the presence of other trees, the classic requirements indicated in your question override almost anything else.

So we shall not have a tree, instead we shall have a shrub.

Here we get a lot more flexibility as we can spread the driving influences around a little.

We should also talk about coevolution. A classic example being bees and flowers. Flowers need bees, bees need flowers. Take away one and the other is lost. The two have coevolved to be largely dependent on each other.

Your pattern of the branches rejoining to form such a shape is highly inefficient and would not happen without some sort of secondary influence driving it that matters more than that inefficiency. What you've created is a distinct inside and outside to the plant, importantly it's an inside that can only be accessed by creatures of a certain maximum size. We shall define it as a coevolved trait.

You have options here:

The first is reasonably common, normally it appears in the form of very long flowers matched by hummingbirds with very long beaks or some other similar form.

Fruit are usually designed to be attractive as widely as possible so that they get the best chance of dispersal. Colour schemes are designed to stand out to creatures with colour vision such as birds, monkeys and apes.

Protection could be an interesting one. Some creature finds a safe home in the bush and in doing so protects the bush from other creatures. Acacia Trees and ants sometimes have such a relationship.

It could be a carnivorous tree, the branches and thorns allow small creatures in, but don't allow them out again.

Any or all of the above in combination also works, perhaps in flowering and fruiting season creatures can come and go easily through the branches, but out of season the gaps allow inward movement only.

Since the structure defines an inside and an outside, it might be useful for situation where the nutrients are not absorbed via the roots but via the branches/leaves, while being carried by the medium. More or less what sponges do in water.

Such a tree would therefore have the outer leaves being the photosynthetic ones, while the inner ones would be the absorbing ones.

The roots would be used only as supporting mechanism, to anchor the tree to the substrate.

The environment could, for example, be:

Make the light come from every direction. That changes the first form so that instead of horizontal branches perpendicular to the average sun location, you get a more spherical shape.

Then make stability (the second form) important. Perhaps there are high winds. This helps keep the branches short.

The high winds could occasionally rip the plant from the ground so that it roams like a tumbleweed. The flat surfaces may optimize the chance that the plant can root again later. The optimal shape for this would be a tetrahedron, but a tetrahedron doesn't have the spherical shape to maximize light. The dodecahedron shape is a compromise between the sphere and tetrahedron.

You could amplify the compromise by creating reasons why particular orientations are important. Perhaps light doesn't come from every direction but only in certain places. The dodecahedron maximizes the likelihood that some of the branches will be in the right orientation.

The reasons trees grow upwards (for the most part) is because of their need to photosynthesize to create food for themselves. Different trees have different adaptations to acquire the maximum about of sunlight, while also protecting themselves from other threats.

One reason to have a dodecahedron shaped plant is if there is something on the faces or edges or corners of the dodecahedron that prevents other animals from eating it, thereby protecting it. Another thing could be to minimize the amount of itself an animal can eat. If the plant's main feeder is a larger animal that needs to bend over to consume it, it would help to be a small, stocky plant without any external protrusions and smooth faces to make it hard for an animal to eat.

Another reason could be that the plant's in-built 'factories' to absorb and process its food requires it to be that way. Much like why solar panels are flat, it helps to have an even and flat surface to acquire sunlight (or whatever it needs). Being many-sided allows it to have a direct interface to sunlight from any and all angles at all times. Sunflowers, in order to maximize how much sunlight they get, actually turn their 'face' towards the sun. Maybe this is similar?

The other answers are great, so I'll go a slightly different direction: imagine a carnivorous plant which folds and unfolds (you can see an animation of a folding dodecahedron here).

If the center edge which stays fixed to the ground (with the roots) has some type of substance to stick or trap prey (or if they folding is fast and reflexive enough), then folding around it as this shape would be a strong force down (making it difficult for prey to escape), and would aid in the digestion process. As an aside, a plant that can eat a lion is creepy.

The challenge is to explain - why a dodecahedron? Why not a circle? Complex shapes do occur in nature, but usually only at very, very small sizes, not at all in plant-and-animal sizes. Perhaps a planet did have a more simple shaped plant or shrub, but as @cyber101 mentions in his answer, over time a shape which prevents grazing, has more structural force, etc, might slowly evolve.

Point is, anything trapping prey in a way which requires the entire inner area to be closed-off with force would inevitably require symmetry. The specifics of why this shape could be happenstance as to the nature of the planet and the creatures around it. I don't see why this wouldn't be possible in some theoretical planet, although I admit it would be extremely unlikely.

A permanent tumbling plant may evolve a shape that as closely resembles spherical as possible, while using minimal mass. Natural objects also tends to respect symmetry as this reduces the necessary genome size. Like the icosahedral viruses which only have to code for a protein that forms a pentameter of trimers for its capsid.

I imagine a world with constantly blowing high winds, which will uproot anything that is not adapted against it's force, but will also give any plants that can harness it's force plenty of opportunity to disperse and thrive. For example, plants that can tumble in the wind and put down roots where ever there is plenty of water and nutrient supplies, and have a shape that can always photosynthesize no matter which side it lands on.

For a given shape, the fewer the faces it has, the less amount of edge length it has for a give surface area. Of course, there will also be tetrahedral, cubic and octagonal plants, but they are unable to roll due to having acute to right angles on their edges and vertices.

The plant needs to roll or tumble, so therefore it have to have leaves on all sides, and needs to be rounded for rolling. It also have to be the lightest for its given size. A tree's mass is largely concentrated in its trunk and branches, therefore: any higher fullerenes or spherically symmetric structures will be less mass-efficient for it's cross section, and any lower symmetric structures won't roll because of the angles, therefore a rolling plant optimizes to adopt a dodecahedral shape, to both maximize it's surface area and minimize it's mass, while still being able to roll with the wind.

As for growth, I imagine the tree grows as a trimer of pentamers, I.e. having individual seedlings being a simple bent shape with a bend angle of 108 degrees, every five seedlings locks together to forme a Pentagonal face, then the outside of every three seedlings adheres to each other, forming a vertex. This naturally self assembles into a dodecahedron when high winds jitters the field of newly sprouted seedlings around, causing them to be stired up and bump into each other. As each seedling sprouts roots at the bent point, the dodecahedral structure can always take root nomatter which side it lands on. Also, The leaves will be on the inside of the seedlings, forming the face of the dodecahedron. This ensures the plant always have photosynthetic tissue facing the sun/light source nomatter which face it lands on.

Not the answer you're looking for? Browse other questions tagged science-based evolution flora .

8
Could Bamboos Evolve Into Trees In the Past?
11
Plausibility Check: Territorial Trees?
14
Plausibility Check: Kite Trees?
27
Would glacier 'trees' be plausible?
6
Hanging World - Trees
6
Tall trees : atmospheric pressure
6
How much water could the Crown Chalice hold as it grows on high-up tree branches?
9
How tall can trees get if water transport limitations are bypassed?