Can Papyrus be folded?

I want a character to invent the codex (that is, modern-shape books) in Ancient Egypt, which means that the primary writing material is papyrus. However, most book binding processes involve sections of folded sheets glued or sewn together. Also, the quickest demonstration of the advantage of a codex over a scroll is to take the scroll and fold it concertina-wise to show how you can easily access parts from different ends of the document.

Therefore, my question is this: Does anyone have a good source or experience whether a sheet of papyrus can be creased as tightly as paper can, or does it break?

Although you've already gotten basic answers, I'll address the specifics of your question.

The answer(s) are no it can't and yes it will break.

Here at the Practical Geopoetry Foundation, we have obtained a fresh, unfolded papyrus scroll, fresh from the antiquities market of old Cairo: 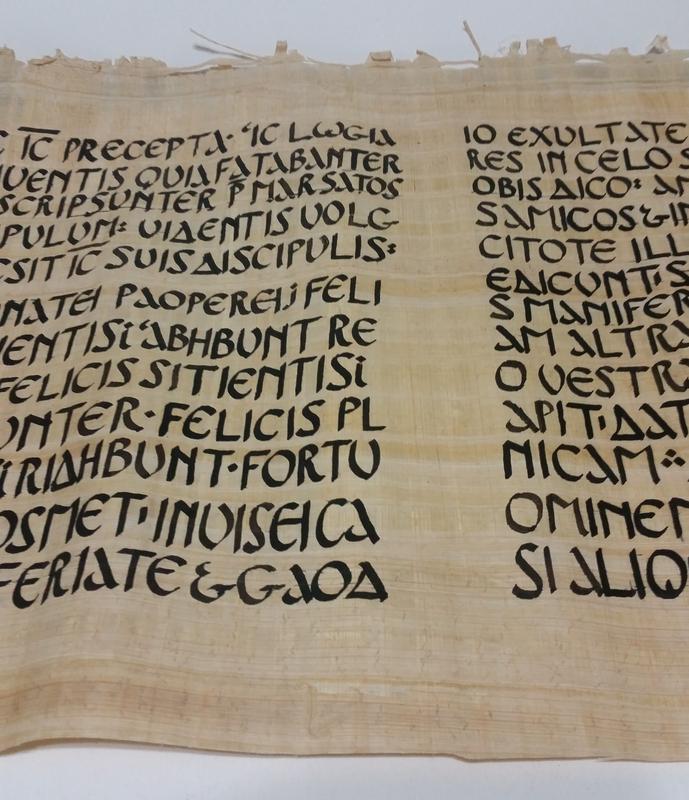 A detail of the area to be folded, showing the large strands of fibre: 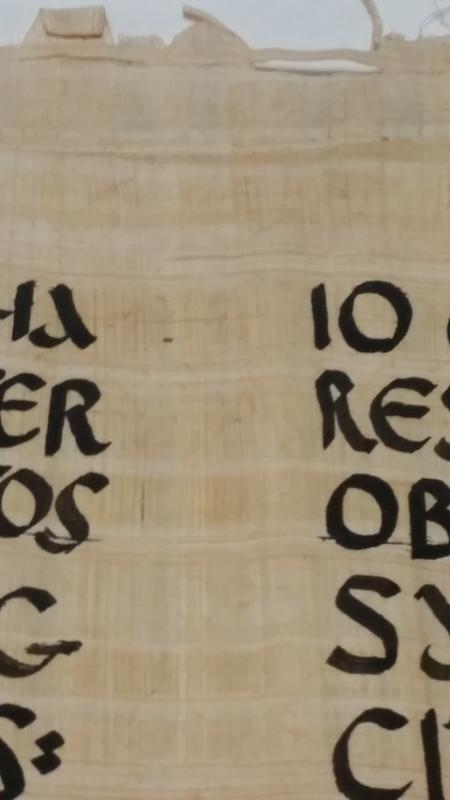 The back side of the same region before folding: 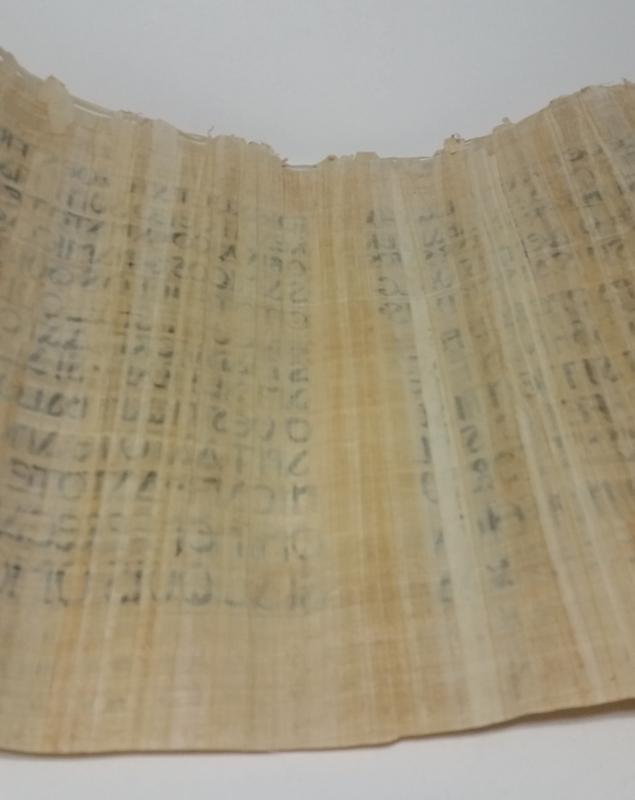 The fold after creasing and pressing: 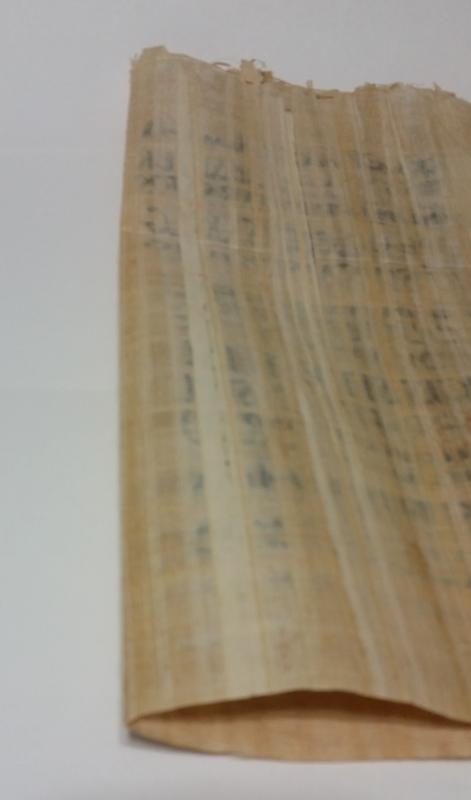 As you can see, the papyrus is folded. During the process, one can hear the snapping of the vertical fibres and feel the slightly jagged edge where the layer separated. Also, you can see clearly that the papyrus fold is not as tight as that obtainable with either rag or wood pulp paper. 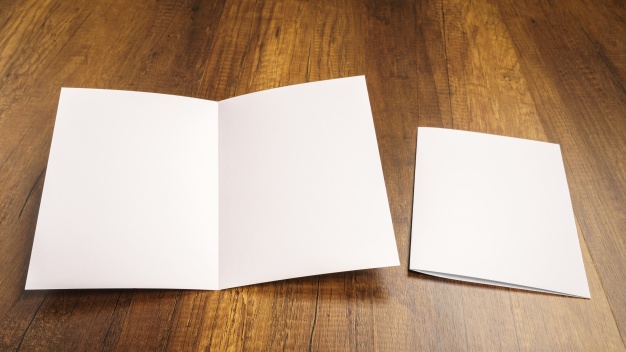 If you've never worked with papyrus, it is a rather thick, quite heavy duty material. It's made by pasting layers of plant fibre together, horizontal over vertical. It's an okay writing surface, though not as nice and smooth as vellum or paper. The thick fibres make it difficult, though not impossible to fold. The material will eventually crumble along the fold.

Of course, your character can invent the codex at any time papyrus was available. She just won't be able to get a neat & tightly folded book without actually damaging the material in the process.

Ancient jewish communities would write documents in papyrus, then they would roll the papyrus, flatten it, and finally fold it:

(...) Papyrus legal scrolls are rolled, flattened, folded in thirds the bound with a knotted string then sealed with two pieces (...)

The site in the link also has this image: 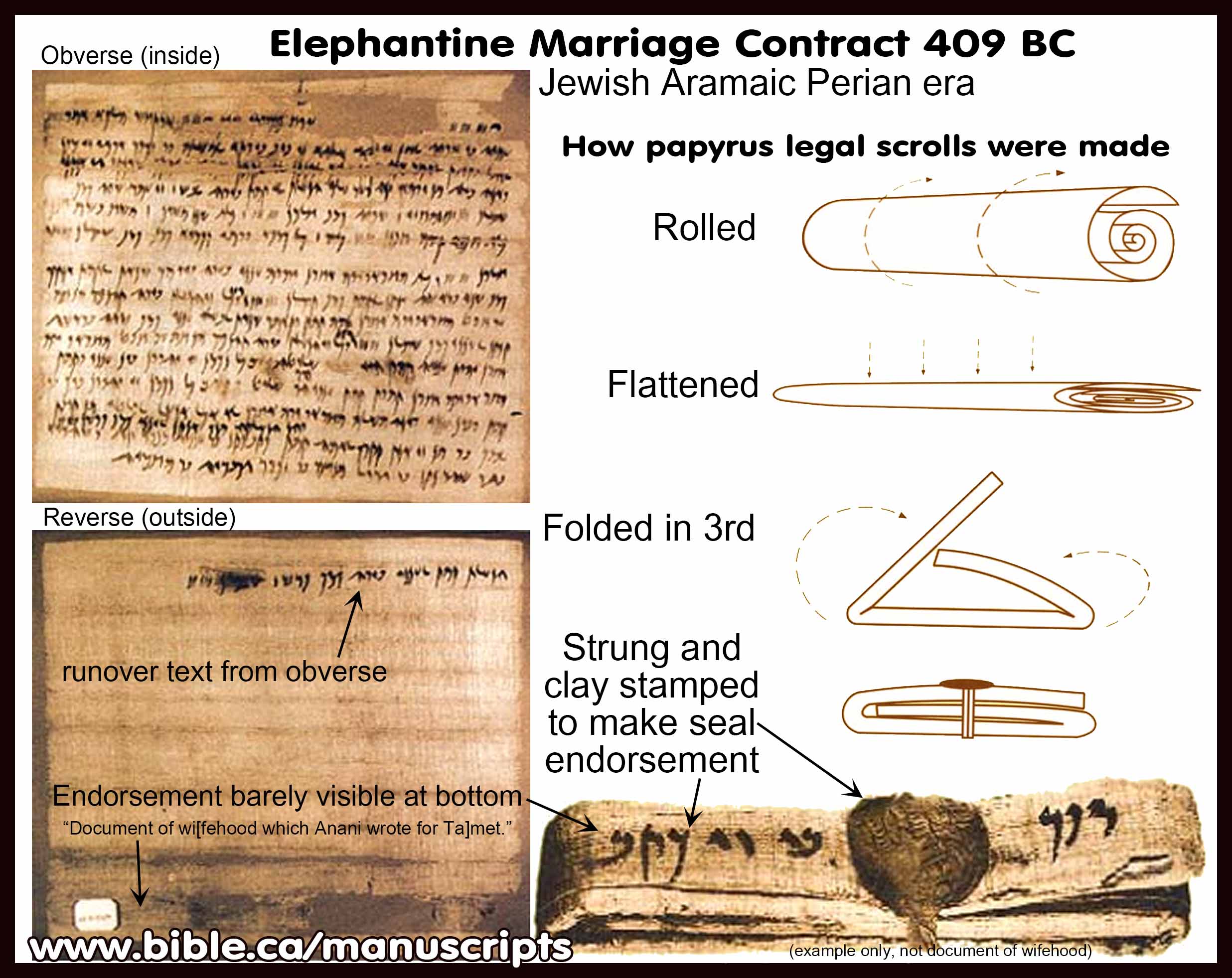 As you can see, some folded papyrus documents have survived the ages well-preserved. The elephantine ones are from a handful centuries before Christ.

Papyrus can be fold to form a codex, and it was

The reason you give (non-linear reading) was the main reason to use codex rather than scrolls, and a particular book make the codex format known: The Bible 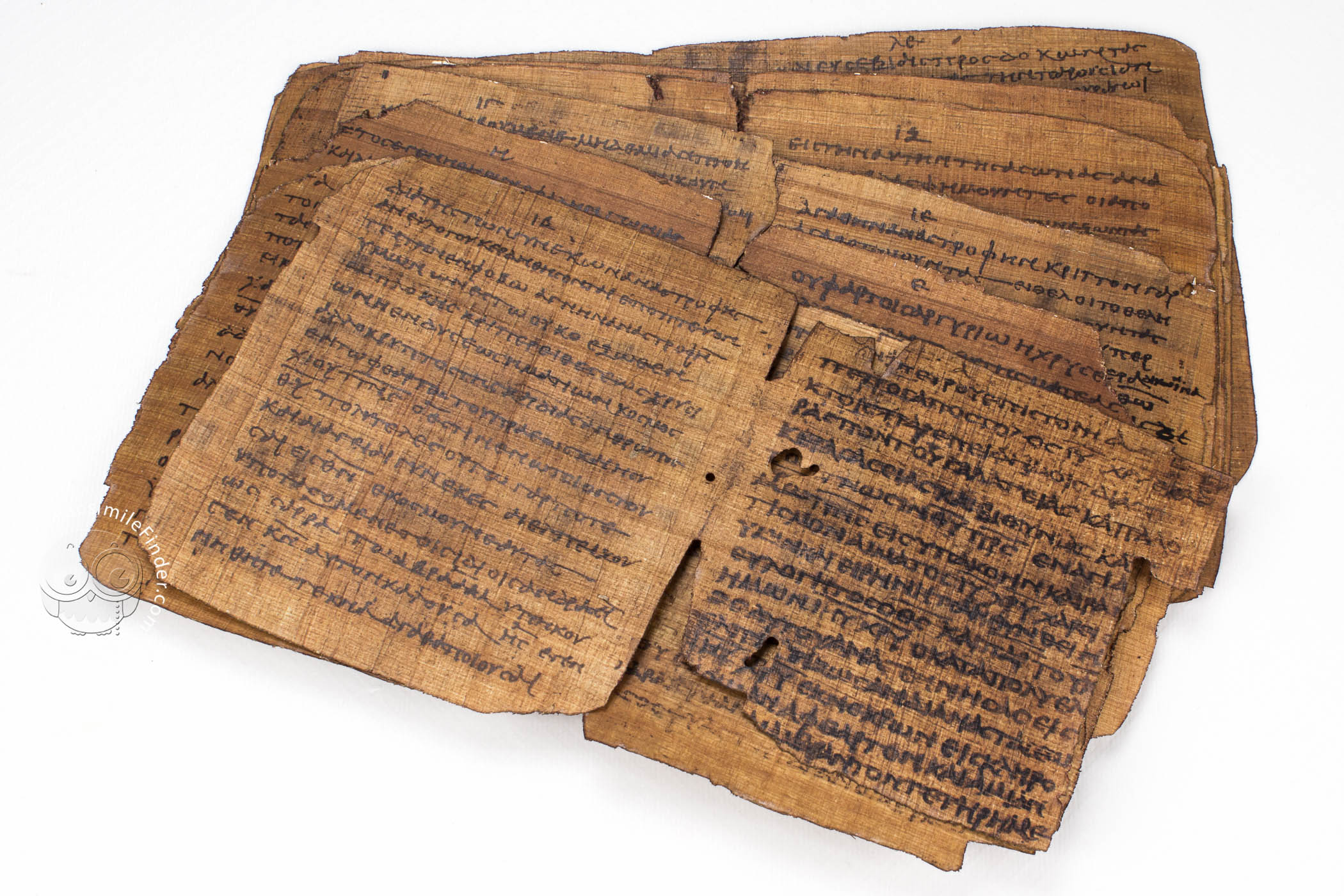 18 thick folios contain the text of the Epistles attributed to St. Peter and constitute the final part of an original codex made of papyrus that in its complete version should have had at least 180 pages as suggested by Michel Testuz.

However, this may depend on the period events occurred. As I said, Codex become popular with the raise of christianity, but the Volumen was much more common before Christ

Have you considered a binder-format codex?

The problem you have is that papyrus is harder to fold. Not impossible, but harder. What if you used a system that doesn't require folding? There are 2 main ways to bind individual pages where you don't need to fold the pages themselves: the Atoma variation: 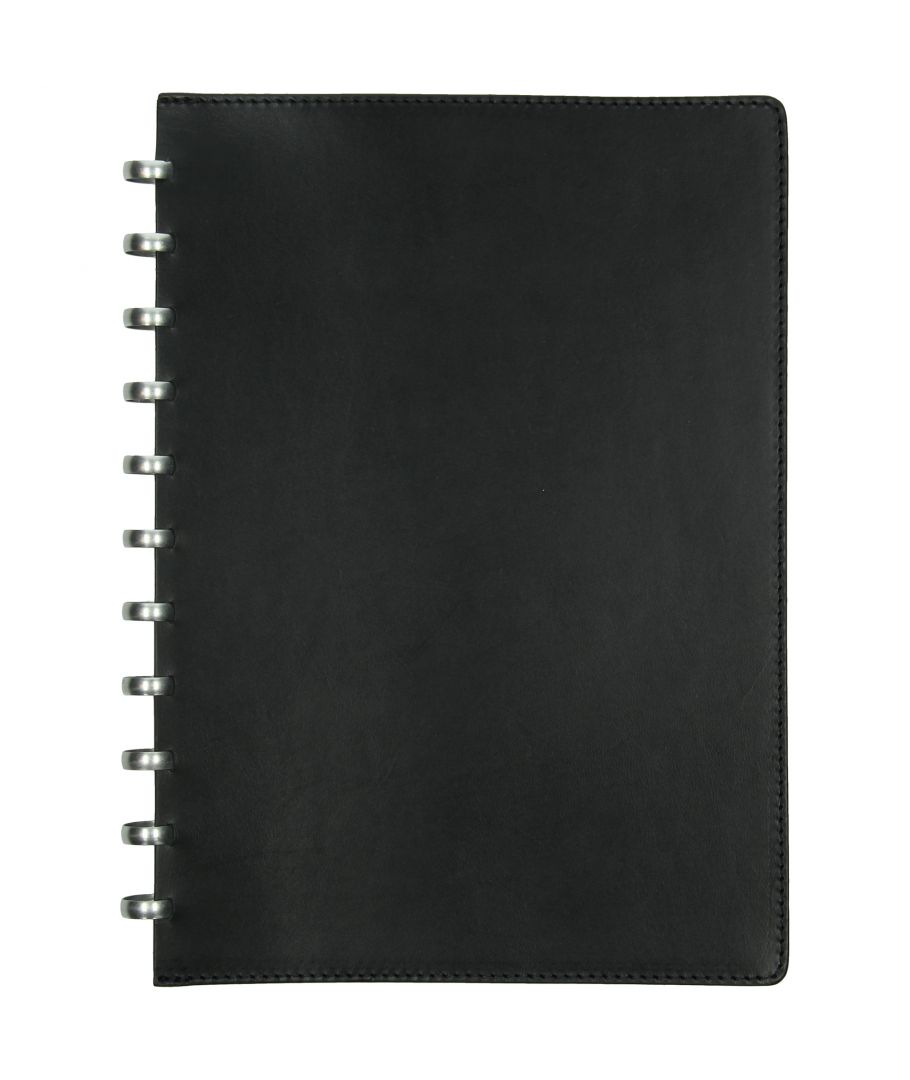 And the ring variation: 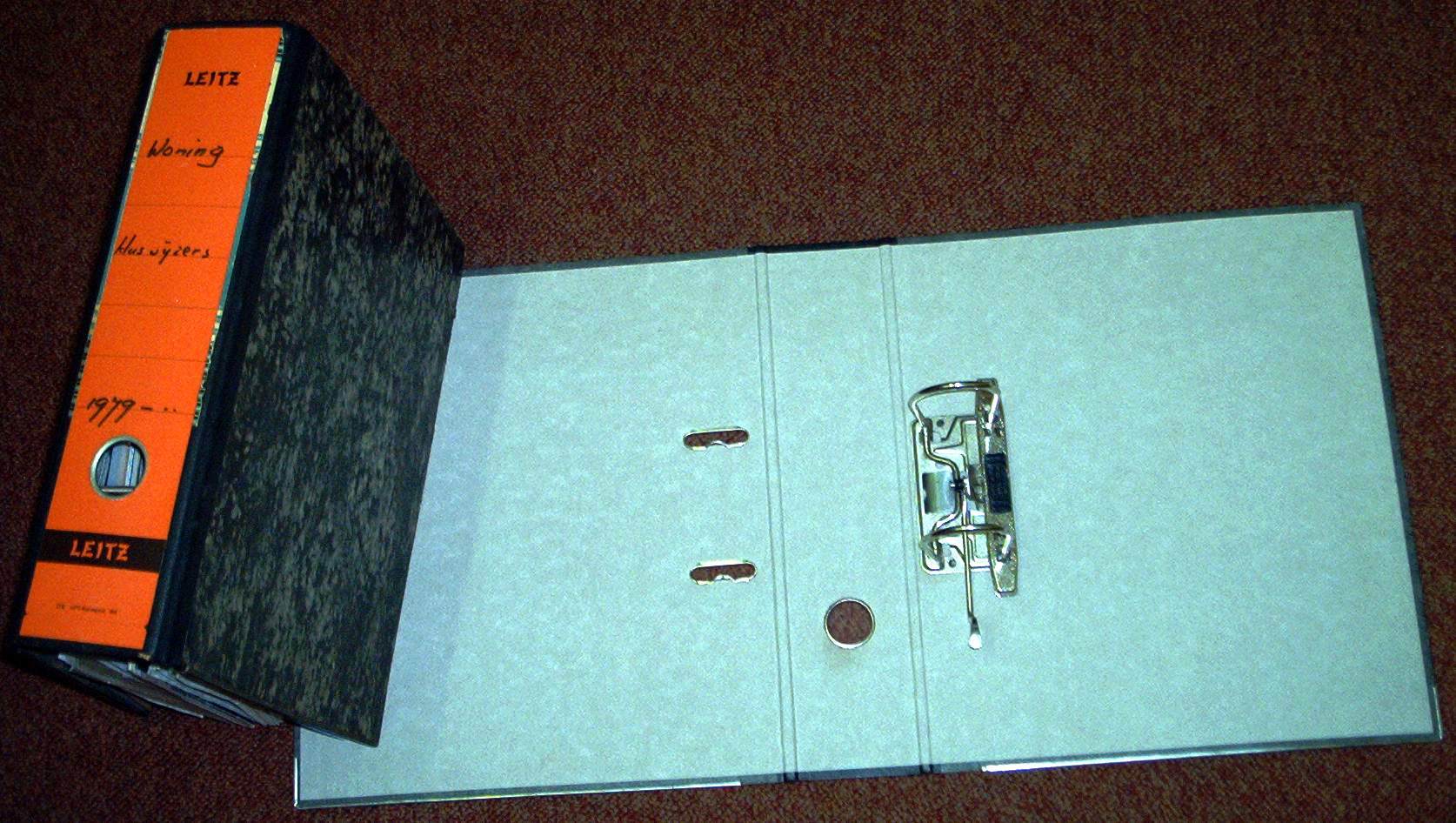 Both of these variations to me appear like it's possible to make them with materials from the Ancient Egyptian timeline.

@Nzall has a good idea in having loose pages bound, rather than using folding, but a more authentic earlier style would be sewing the pages together. While tightly sewn papyrus pages would still need some folding to "open" the pages where required, a loosely sewn binding could mimic a metal ring or spiral binding to allow careful turning of the pages to allow them to lie flat. While most bindings sew through folded pages, this is not a strict requirement.

Your protagonist could also add heavier fabric covers to help protect the codex while it is stored.

Not the answer you're looking for? Browse other questions tagged reality-check materials ancient-history written-material or ask your own question.

4
Can We Build Noah's ark?
2
Can You Mix Glass in a Metal Alloy?
15
Can a modern book that traveled back in time be proven to be older?
14
Can porcelain be "reforged"?
1
Closest thing to Unobtainium Crystal that can save memories
10
How early can transparent glass windows be easily available?
1
Can a character raise a T-Rex from an egg and have it be tame?
9
How heavy can my wooden trains get?
4
How to write martial/magic arts manuals so they can be deciphered and practised in a distant future?