In a lab at Caltech Ken Libbrecht has been simulating snowflake formation and under absurdly exact laboratory conditions, they have been able to create almost identical snowflakes.

Clearly, in the real world, we do not observe identical snowflakes because each snow flake has different conditions as it falls from the sky to hit the Earth. Humidity, wind, temperature are not uniform enough to produce "identical" snowflakes. The process is too stochastic. Here is a cool infographic portraying all the different possibilities: 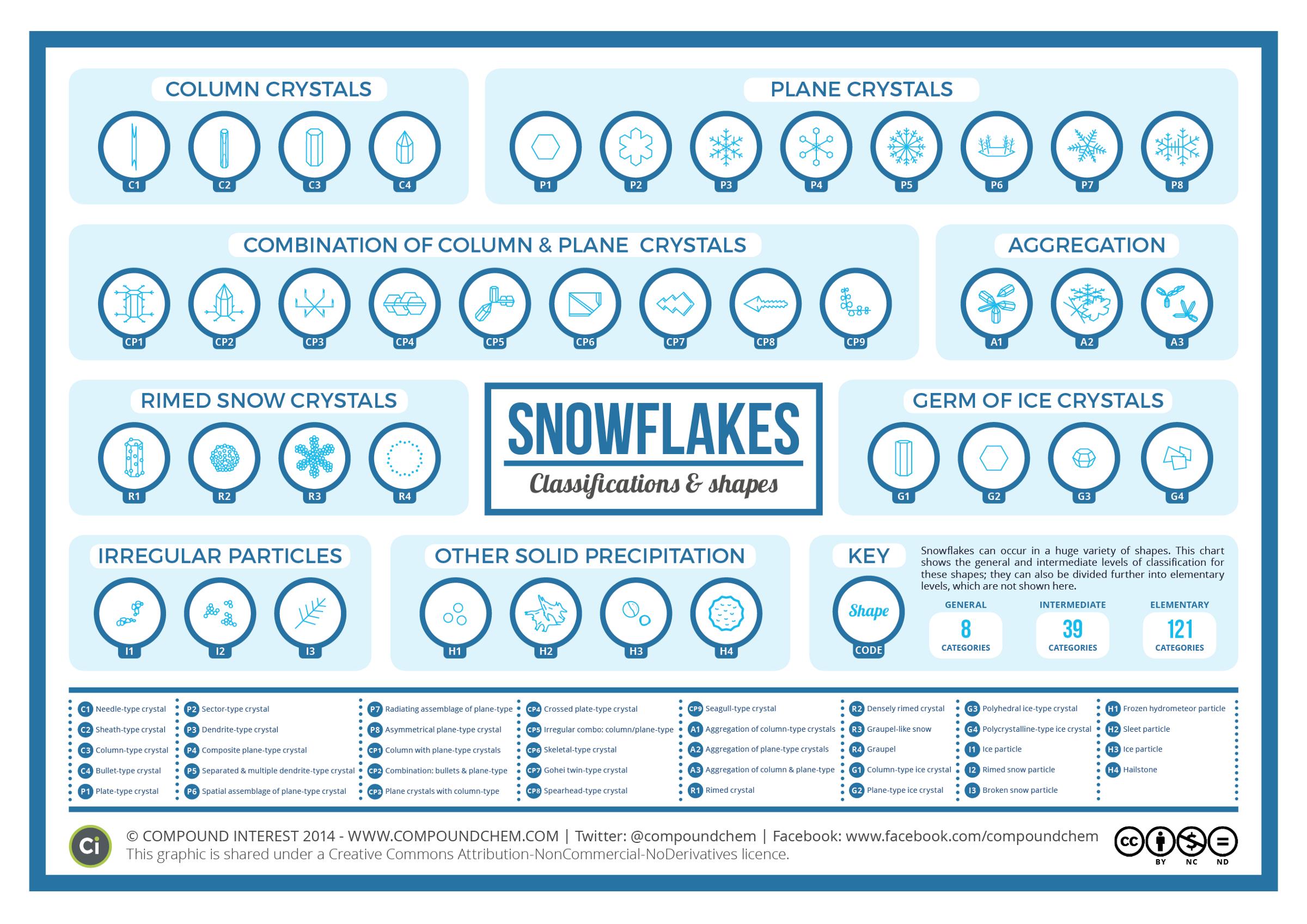 Note: To prevent a straw-man stalemate, I do not propose the snowflakes have to be 100% identical down to the very quark or subatomic level -- I'm not taking an absolutist position. I'm just using "identical" in the reasonable sense. Suppose even after studying two snowflakes carefully for a few minutes, you still can't find any differences.

How can I construct a world such that the humidity, temperature (and other relevant factors that the answerer wants to address) are as uniform as possible?

You cannot: the size of a world is so large that, even with an extremely narrow statistical distribution of physical values, you will end up with noticeable differences, which would not emerge on a lab size environment.

At most you can scale up the lab environment to the size of a small building, but as you get larger than that, statistics will beat you.

I'd like to offer a frame challenge, based in part on your note on straw-man stalemates:

Snowflakes are already all but identical

Snowflake classification does not have a particularly long history; while the ancients remarked that there were columns and planes, that is about as close a study as anyone was able to make until the 1880s.

Now, as it happens, I don't recall ever really seeing columnar snow crystals; I suppose I must have at some point, but all the ones I actually remember are planar. Similarly, I happen to recall that the Ancient Greeks described columnar snow crystals. All of this leads me to believe that for a given climate, you should expect to mostly see one type or the other, or combination ones in transition climates (or at any rate, than any given cloud should give one kind of snowflake or the other).

In any case; to the typical naked-eye observer, snow should be expected to consist of "reasonably" identical particles.

If the temperature is uniform, snow won't form.

The only way I can imagine there being n ear-identical snowflakes is for there to be some kind of curse on the world, it's a simulation, or there's some funny-business going on with nano-machines.

Maybe with some future-technology it's possible that all of the snowflakes are "made uniform" after their formation. (this sort of reminds me of "Tree diagram" from raildex.)

For a simple example, look at the Ising model. It has far less variables than a Ice Process, but already produces fractal formation highly dependent on environmental noise and initial conditions.

It's pretty messy math that I only have minimal experience with, but fractals are very difficult and certainly not something that can be identically reproduced.

Not the answer you're looking for? Browse other questions tagged science-based atmosphere weather .

23
What would ammonia snowflakes look like?
2
World destruction - continued existence of separate biomes possible?
10
Could your grandchild be genetically identical to you?
4
Snow on a low-gravity, high-pressure world
3
What would the weather be like after the world is shaded by an immense object?
12
How do you develop global wind patterns for your world?
29
Can blood form snowflakes?
4
Weather for a dense-atmosphere water world
10
Weather processes on a flat world