The Lusca (its name meaning 'Octopus Shark') is a cryptid from the Bahamas, supposedly a 6-9 meter (or even 23 meter) long man-eating Octopus that lives within the blue holes, dragging victims down into the winding underwater cave system that connects all Blue Holes.

Given that Blue holes are anoxic and are not super conducive to Octopi and their eggs due to the lack of currents/oxygen, is there any way to realistically modify a lusca-like organism to thrive in the hostile environment of a Blue Hole?

A link showing that there is life within Blue Holes, albeit small organisms rather than man-eating sized monsters https://news.nationalgeographic.com/news/2012/02/120202-blue-holes-new-life-alien-oceans-europa-space-science/

Let's start with a template animal for the enormous Lusca. The giant pacific octopus is a good candidate. We're talking about this guy: 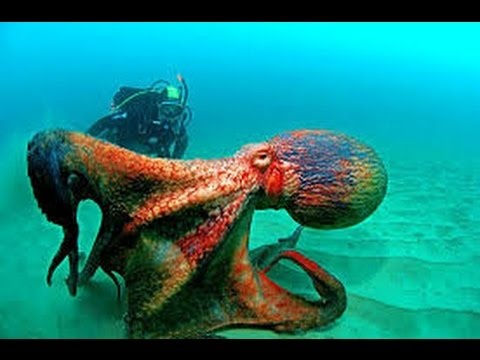 Scientists disagree on the size record for that species, but Guinness quotes it as a 136kg (~300 lb.) one who had an armspan of 9.8m (~32 ft.) (see the wiki in the link above). Way smaller than the giant and colossal squids, but hey, you asked for an octopus.

Now let's see about anoxic waters. They are defined as waters with an O2 contentration of 0.5mg/L or less. The abyss is similar - dive deep enough, and the O2 concentration falls from 4-6mg/L to less than 2mg/L. And you know who lives in the abyss? The squids I mentioned before!

Since squids and octopi are related, let's say the Lusca has characteristics of both. It may use the same trick as the Humboldt squid to survive in low oxygen areas:

In a new study, Seibel and his colleagues pulled Humboldt squid out of the ocean and held them in tanks of normal or low-oxygen water for up to three and a quarter hours. Then they carved up the squid and scrutinized their tissues to see what was happening on a molecular level.

They saw that when spending time without oxygen, squid shut down the energy-demanding processes of activating genes and using them to build new proteins. Other animals that can survive in low oxygen do the same thing, Seibel says. But the “new horizon” in this research, he adds, may be epigenetics—the way DNA is packaged and stored inside cells, which can affect how genes are used. In the Humboldt squid, changes to histones—proteins that spool DNA for tighter storage—seemed to be crucial to its adjustment to low oxygen.

So your beast gets in energy-saving mode at the bottom of the blue hole, and switches to full run-and-disembowel-the-player mode when near the surface (this is actually how the Humboldt squids do, except they go to the Oxygen Minimum Zone instead). The lusca's modus operandi is to pull victims into the blue-hole for the same reason that alligators and crocodiles drag their larger prey into the water - due to the hunter's adaptations, the prey will quickly drown/asphyxiate and thus stop struggling, while the hunter will be able to last longer there. For a regular water-breathing animal, being dragged into a blue-hole is like being an air-breathing animal dragged into the water.

Finally, as for how it can keep its brood safe in low oxugen waters - it doesn't. The lusca is an octopus, which means it is a master of misdirection. It lays eggs around the blue-hole, not in it. The caves where it lays eggs are hidden behind plants and/or coral, and they are protected by mother lusca. She is such an adept at camouflage that if you find the eggs and try to eat them, you will be dead before you know what hit you.

The Lusca could have evolved from a large octopus. This octopus may evolve to move faster, and become fully bipedal. Due to being faster, they might try to become predators. This would lead to the beak growing into a large jaw, with a living layer surrounding it in order to allow regeneration. The jaw might become so large that the arms are no longer needed to feed, and so they would likely turn and point backwards. They might gain some sort of movement-sensor like a lateral-line on their jaws, which may transform into something resembling eyes. They may evolve to retract their jaws and extend their radula as a lure. The lure might become more like a tentacle, and become able to grab the prey and draw it into the jaw. Some individuals might learn to make their lure appear like a human, to draw in human prey. This evolutionary path would lead to the Lusca