What could explain this unique “fruit” tree?

Our protagonist lives on one of a group of remote islands where she makes her living harvesting a peculiar fruit. The edible part grows in the middle of liquid-filled sacks that hang near the top of the local trees. The top of the sack must be pinched and sealed before being cut from the tree because the fruit is spoiled by the reaction the liquid in the sack has when exposed to air. However, when properly harvested and treated, the end result is singularly delicious.

The trunk of the tree is flexible, downright bendy even, but quite weak. The weight of the average adult attempting to climb the tree is enough to snap it in half, which also spoils the fruit. (I imagine that the trunk is hollow and that some sort of vein connects the sacks to the roots, but any explanation is fine.)

What would explain these features?

Most importantly, what kind of liquid could fill the sacks, why does it react with the air, and how do the villagers process it to extract the fruit?

You may assume whatever you want regarding the islands and the type of plant this “tree” really is (perhaps it’s more aptly classified as a flower, for example, or its roots extend into the ocean—anything goes.) Processing the fruit could mean anything including freezing it, injecting another liquid into the sack, opening it while submerged in another liquid, etc.

Crudely drawn, bare minimum visual representation of what I'm about to say. 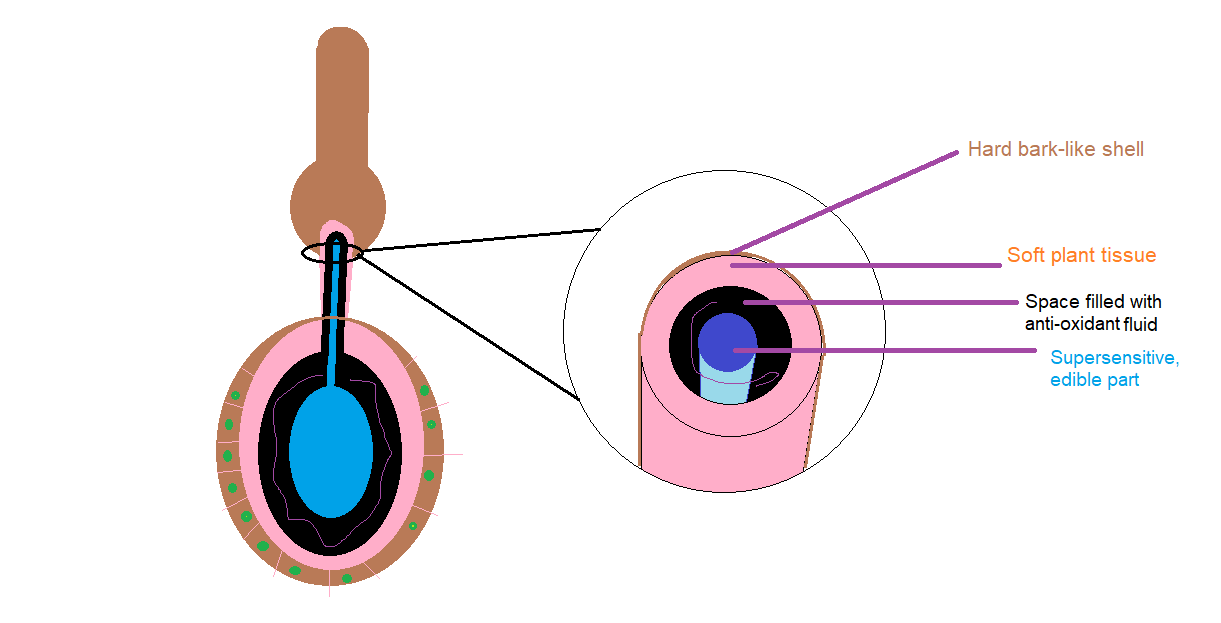 The black fluid with purple strings is like a combination between honey and blasting jelly, which preserves the seed inside even if its bark-like shell is already made of dead wood cellulose.

With the hard shell, the only way to pick it is by pinching the pink stem, which is also the top of the sack, but not only that. The stem is really soft, like the rest of the tree. Breaking this soft tissue will react the black fluid with the air, whose reaction causes the edible part to burn, heating and expanding the bark-like shell and shattering it like a giant popped corn, but with the exploding efficiency of a shrapnel bomb. That way, it spreads its seeds which are the green seeds in the brown bark. But that's not the point.

In order to harvest this really rare fruit properly, your protagonist looks to some animal that often holds the stem with its mouth, and seemingly just drops it after some time. It actually eats the fruit this way by first sucking the blasting honey-jelly and stores or excretes it somewhere, then slurping the edible part, and then dropping the entire empty bomb fruit and increasing the chances of a seed growing at the site where it the bomb fruit is dropped.

If the bomb fruit explodes however, the chances of all seeds surviving somewhere else increases as well. Thus, effective and natural plant reproduction method. Your protagonist maybe found out what the animals are actually doing, and replicated the method. They pinch the stem after picking it so that the liquid does not touch the air, drain the fluid and store somewhere else, and simply extract the blue edible part somewhere else, all without making the bombfruit explode.

Any liquid that prevents oxidation with the air would work in your fruit, as an oxidation reaction is essentially the same as spoilage. This could be something as simple as any kind of oil, say something very fatty resembling vegetable oil.

As to what the biological usefulness of this is, it's a bit difficult to quantify. At first, I considered the possibility that the fruit inside the sack might require that it be passed into an oceanic environment, but the water can oxidize just as easily as the air can (oxygen dissolves into water quite well, after all).

What might work is to say that, for some reason, the seeds of this plant require an anoxic environment, so let's imagine there is some kind of herbivore that eats the fruit and processes it in its anaerobic gut using symbiotic bacteria.

The plant has evolved a symbiotic relationship with this creature, and so it creates the fruit to preferentially be eaten by the animal. If the sack is broken, the fruit is exposed to air, and a chemical reaction produces something like capsaicin, making the fruits borderline toxic, incredibly spicy, and generally inedible. The plant has done this because the animal it wants to attract is a mammal, but birds (who are immune to capsaicin), can't provide the useful anoxic environment for the plant's seeds. In the real world plants produce capsaicin in their fruits to discourage mammals, which crush the seeds, from eating them, but birds, who are immune to capsaicin, don't damage the seeds, and so the plant doesn't want to harm birds with its fruit.

This way, only the special herbivore (and clever humans) knows how to eat the sac-fruit properly, and because of the toxic oxidizing reaction, other mammals avoid the plant entirely. Because the fruits are so large and surrounded by an unpleasant oil, birds generally avoid them, as getting oil on their feathers makes them unable to fly.

Only unripened fruits are edible

The fruit must be connected to the tree and receive a flow of juice to fully ripen. When it happens, juice channel closes off and fruit is ready to disconnect from the tree. The problem is, by that time its core gets too hard and becomes virtually inedible. So islanders need to pick up the fruits before they reach maturity. This requires them to deal with a peculiar problem of juice and spoilage. Of course they are resourceful and can either seal off fresh fruit, or process them right away.

It could be a plant protection mechanism similar to the way exposed potatoes produce a toxin to make the starch they store inedible thus protecting the fuel reserve of the plant.

In this case the plant is a type of carnivorous plant that attracts small birds to its pods. It opens its pods in the morning and the birds are attracted to the sugary scent they give off. The plant produces a mass of flesh high in sugar content from the base of the pod.

The pod is actually a specialised flower with the walls being the petals and the central mass a fat squat stamen full of nectar. Some of the nectar dissolves into the water that collects at the base of the pod which is what the birds come to feed on. As they feed the petals slowly close trapping the birds. The petals then release digestive enzymes into the liquid to break the bird down and special structures at the base of the pod absorb the nutrients released.

The liquid also serves to protect the core/stamen from insect predation. When the liquid isn't present, the stamen produces a toxin to protect itself from being eaten. In dry seasons the plant may not collect enough water to keep the stamen fully covered so while the plant can still trap birds, the stamen becomes toxic. The stamen being the "fruit" that gets harvested.

If the plant is pulled down then much of the liquid will escape and the stamen will produce the toxin making it inedible. In a natural setting the toxins in the stamen would dissipate as the liquid inside the pod rose again but in a harvested pod this is not possible so care must be taken not to spill the liquid until the nectar filled stamen can be recovered.

Using a certain process the harvested pod becomes incapable of producing the toxin at which point the liquid can be poured out and the stamen collected. The liquid would be full of nectar too so could be very nice to drink though I don't know if dissolved birds would make the liquid distasteful or not. Probably not a good idea to drink something with digestive enzymes in it anyway.

The liquid spoiling the fruit on exposure to air could be due to a protection mechanism in order to prevent other creatures from eating it. The deciding factor would be what happens to the seed in the fruit. Normally the content of the fruit is mostly things helpful to the seed either for spreading it by attracting animals and birds, OR directly providing nutrition to the seed after the fruit falls. Going by this logic, the direct reaction with air turns the fruit pulp into a super manure for the seed when it falls naturally and pops allowing the seed to germinate and grow. The air reaction is essentially a detector for when the fruit falls. As to what exactly in air it reacts to, I am sure evolution has your back. As a wise man in a movie once said: "Life finds a way"

The tree might be weak and flexible to make sure that when the fruit is ripe and heavy the tree bends sideways increasing the reach of the tree, causing the fruits to fall sufficiently far away, and spread the area covered by the trees preventing competition for nutrients.

44
How could I scientifically explain ice breath?
8
What factors determine the type (shape/color/consistency) of fruit?
6
Help me Explain this Alien's Traits
0
how to scientifically explain this fictional type of matter?
6
What tree type grows into the most dense forests?
4
Could a tree evolve to have vastly varying shades?
4
How could a tree survive a volcanic blast?
13
What evolutionary pressures could lead to tree dwelling octopuses?
9
Could a red tree exist?