Background, with potential spoilers: In the Netflix show Stranger Things...

...there is an otherworldly creature known as the Mindflayer, which can telepathically control creatures in our world as long as the portal to its world is open. Once it has a creature from our world under control, one of the things it can do is "melt" that creature into more flesh to add to its preferred monstrous avatar.

If we skip the psychic stuff, there's still a pretty interesting creature there. To qualify as a Mindflayer monster, an organism should

Ability to shapeshift into any additional forms (besides blob, walker, and pieces just cut off of a walker) is not required.

So, how could such a creature work, and how could it evolve?

Your Mindflayer is a religious slime mold. 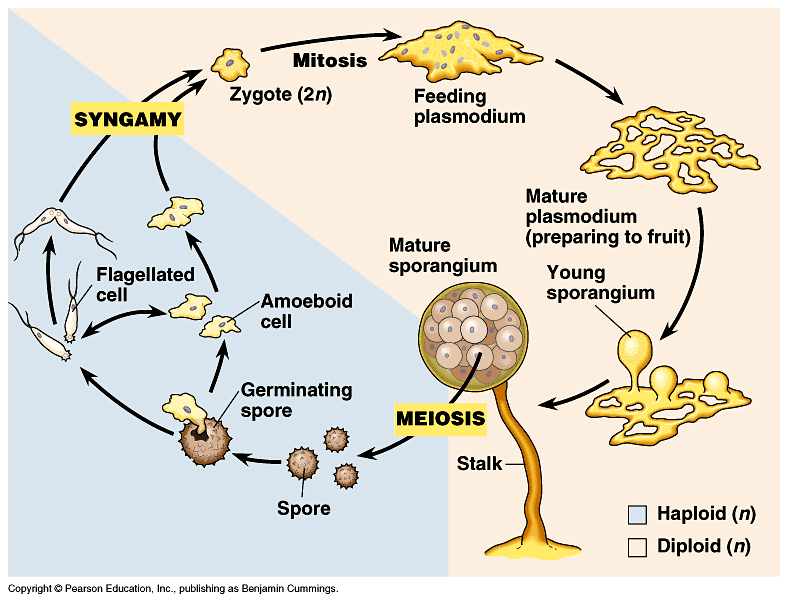 Individuals of the prey species, like individuals cells of the slime mold, have the power to go about their business as individual single cells; slime molds have swimming cells and amoeboid cells as depicted. Your individuals can have one mode or different modes as you see fit. Individuals can be persuaded by various means to join the monster just as individual slime mold cells join a feeding plasmodium: a large flowing blob of merged individuals. The slime mold plasmodium is capable of dry land movement that the single cells cannot do, and capable of reproduction. Your Mindflayer has other emergent abilities not possessed by its constituent organisms.

Cool stuff: slime molds can learn by experience, and if an unlearned plasmodium merges with a learned one, the whole thing becomes learned.

But Dussutour’s work suggests that the slime molds can sometimes pick up these behaviors through a form of communication, not just through experience. In a follow-up study, her team showed that “naïve,” non-habituated slime molds can directly acquire a learned behavior from habituated ones via cell fusion.

The religious aspect has to do with the persuasion. Also consider that like minded individuals (humans in a group, or a pack or flock) acquire abilities in the group that would not be possible for the individual. An individual might be coerced or tricked - or might be persuaded to join the group because of the promise of the abilities group membership makes possible.

Your Mind Flayer isn't a single creature. Its a hive mind of small insects which branches off from ants.

There are two types. A Worker and a Queen. A Worker is born with two pre programmed objectives. Find Food, Bring it to the hive. Unfortunately, due to their size, they can't actually hunt or gather anything worthwhile. Instead they will attempt to access any creatures brain and release a chemical which gives the target a desire to go to the hive. Once the worker has brought food back to the hive, the rest of the workers will work together to break it down and process it. Feeding the meat to newly born workers. The worker who brought the food then joins the Hive.

A Queen sends out instructions to the hive. Due to the size and complexity of the hive, there are multiple queens to work in a distributed network to control and manage all the workers. This means groups of workers can be broken off from the main hive body and have roughly autonomous control as long as they have a queen in their midst giving them commands.

The queens command the hive to move using a form that has legs. This helps provide the queens protection from attackers on the ground as they are lifted far above it. It carries over from their early evolution days where they would often be attacked while travelling in clumps on the ground.