Shinespark-like effect with a jet engine

I am working on a 2D platformer game, and I'm trying to introduce a jetpack which would give a shinespark-like ability from Metroid series, i.e. it needs a run-up to a certain speed, at which the engines become operational and can be fired. The catch: I'd like to stay as hard-sciencey as possible, so the alien supertech from Metroid is unavailable.

Considering modern day tech, the operation sequence reminds me of a pure ramjet which needs a good airflow before it can be fired. The problem is, a ramjet needs a run-up to something around 1 mach (or even more), which is too much for a running character (she's not Flash, although augmented to above-human abilities). Its final operational speed is also far too high.

Another possible engine is a pulsejet, especially a pulse detonation engine. It seems really promising: highly advanced, low operational speeds are possible (although less efficient), it seems like compact designs are possible. But it doesn't seem to specifically need a run-up to ignite (maybe the deflagration-to-detonation transition could possibly need it?).

So, what kind of engine could be used in a jetpack, that becomes operational at speeds of, let's say, 10-30 m/s, and allows to achieve operational speed of, say, 0,5 mach, without too much handwaving? Consider the atmosphere composition and pressure close to Earth-like (slight variations are possible as long as it stays breathable for non-augmented humans). It is implied that the device is either a production model or a working prototype, i.e. the need for a run-up should be justified by the engine technology itself, not an artificial restriction (like a broken/non-functioning pre-compressor, for example).

There is no such thing in the realm of hard-science. Speculation could be made on what might be possible in the future, but that would be science-based, not hard-science. It's difficult to invent a fantasy technology using real technology.

The closest real life thing that comes to mind is the rigid-wing jetpack used by Yvess Rossy to power flight after jumping from a plane. His pack can't be used to take off from a stop, but has only gone as fast as 85 m/s, far short of your requested 170 m/s. 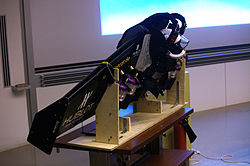 Not the answer you're looking for? Browse other questions tagged hard-science flight or ask your own question.

10
Could a creature fly like a helicopter?
18
Runaway Starship Ramps
12
What would be an actual real life mechanisms of an accelerated healing factor?
103
Would planets be cubic in my “cuboverse”?
1
How could an airship made of magic wood propel itself through the sky without an engine?
6
Is a Titan-like planet with Earth-like gravity plausible?
6
Air bladders in bat-like skin wings for better lift?
6
Help cooling living H$_2$ fueled pulse jet engine