Consider such a tidally locked planet: 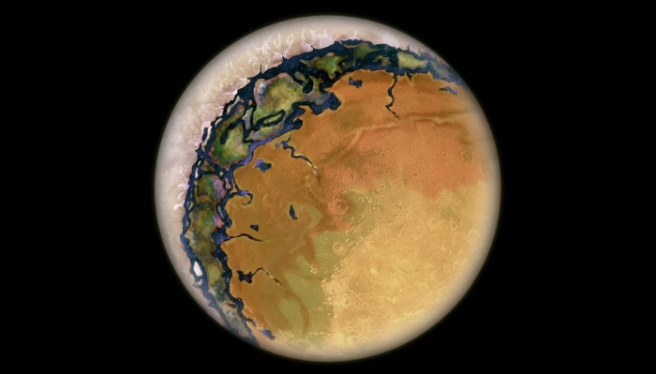 Basic assumptions: Weather would vary very little since there would be no seasons and no day-night cycle. The planet would be scorching hot on one side and freezing cold on the other. A strip straddling the terminator, the midpoint between the dayside and the nightside, would have water within the temperature range for it to be liquid. Atmosphere is dense enough for the necessary heat distribution to have a reasonably broad habitable "ring" around the terminator.

Let's pretend the problems of solar winds slowly stripping the atmosphere and of solar flares are solved.

Instead of warm air rising at the equator and settling at the poles as it does on Earth, it rises on the dayside and settles past the terminator line. It carries with it moisture, from the evaporation of water on the dayside. Some water precipitates past the terminator line and, if topography is kind, runs from one side of the ring of life to the other, to repeat the cycle.

But what happens to the water that rains on the wrong side of a mountain or hill and is forced down, deeper into the nightside? Some water should end up frozen, trapped where sun won't ever come to melt it, removed from the water cycle.

What keeps my planet's water from irreversibly concentrating over time on the frigid wastes while the rest of the planet dries up?

There are atmospheric models for tide-locked worlds that show a permanent cyclone on the light side, with constant winds blowing between hot and cold sides. As with Earth, heat makes air lighter and decreases pressure. As such, hot air moves up and cold air falls down. This drives low-altitude wind from cold to hot regions, and high-altitude wind from hot to cold regions. On Earth, things get complicated due to rotation, forming Hadley cells, and then even more by continents and oceans.

In the case of a tide-locked world, you would have permanent wind blowing from the cold to the hot side on the ground, and in reverse at high altitude. This would help equalise temperature between both sides.

Additionally, you would have the oceans themselves move heat. On Earth, this is visible with thermohaline circulation, driving the Gulf Stream among other currents. Without it, it is estimated that Europe, for example, would be 10°C colder (something they would probably like at the moment this answer is written, if not anytime). Water can move enormous amounts of heat in as slow cycle.

There are some models that estimate that the cold side could actually still have an ocean under its enormous, possibly km-thick ice sheet, with the ocean extending partially to the hot side.

With both those mechanisms, water would always be partially liquid, enough to have a large band of open oceans.

As an aside, I am curious how you will solve the effects of solar flares, atmosphere stripping and possibly water being cracked when it is high-altitude vapour on the day side.

What keeps my planet's water from irreversibly concentrating over time on the frigid wastes while the rest of the planet dries up?

When ice piles up, it will exercise pressure. The closer to the terminator, the less the ice.

As a consequence, pressure gradient will tend to push the ice sheet toward the terminator, where it will melt, returning water to the cycle.

You can add to this local orogenetic factors, and your water cycle will be present.

Librations. That is, the tidally locked planet is not in a perfectly circular orbit, and so the portion of the planet that is sun-facing is not constant. This is because the rate of rotation is (extremely nearly) constant, but the rate of revolution around the sun changes due to the non-circular nature. For the Earth's Moon, this is only a few degrees. If the orbit were a little more extreme the wobbling could be more extreme. This would mean that water near one side was melting while the other was freezing, then the other way around the rest of the year. It might well mean that there were some pretty extreme storms due to the temperature differences.

Also note that a tidally locked planet is still rotating, just once per year. And so it has an axis of rotation. If the axis of rotation of the planet were not perfectly perpendicular with its orbit, you get a different kind of wobble. This is also happening for the Moon. Just as the Earth has summer in the northern hemisphere when it is tilted toward the sun, you would get an apparent movement of the sun due to the axis tilt. You could arrange to have this be quite large. It would mean you had a severe set of storms that followed the part that was cooling, where water condensed out as rain, then later snow.

Possibly the large volumes of water moving around have important consequences as far as things like earthquakes. If you moved km deep piles of ice back-and-forth each year, it has an effect on the crust of the planet. Parts of the Earth are still rebounding from the last ice age.

"Life will find a way" (to melt the ice)

If there's a flourishing ecosystem of extremophiles living in or under the ice-sheets on the night side, near the border region, the heat produced by their metabolism could create liquid water, which could flow back into the border region.

The obvious difficulty with this solution (besides how the ecosystem got there in the first place) is what this probably-mostly-microbial life is eating to sustain itself, as well as to generate the useful extra heat. Some kind of vent-creatures would be plausible, though sufficient vulcanism would generate a fair amount of heat on its own, leading into wpokdljnlnmn's suggestion.

As I mentioned in the comments above, current models of tidally locked planets do not support the conclusion that the antistellar (night) side will be a permanent frozen waste and the substellar (day) side a relentless scorched desert.

I will repost the relevant part of my answer to this question:

Given the large amounts of heat-transporting surface water and an atmosphere, your assumption of significant nightside ocean freezing and a permanent hemispheric ice age may be wrong:

Surface liquid water is essential for standard planetary habitability. Calculations of atmospheric circulation on tidally locked planets around M stars suggest that this peculiar orbital configuration lends itself to the trapping of large amounts of water in kilometers-thick ice on the night side, potentially removing all liquid water from the day side where photosynthesis is possible. We study this problem using a global climate model including coupled atmosphere, ocean, land, and sea-ice components as well as a continental ice sheet model driven by the climate model output. For a waterworld we find that surface winds transport sea ice toward the day side and the ocean carries heat toward the night side. As a result, night-side sea ice remains O(10 m) thick and night-side water trapping is insignificant. If a planet has large continents on its night side, they can grow ice sheets O(1000 m) thick if the geothermal heat flux is similar to Earth's or smaller. Planets with a water complement similar to Earth's would therefore experience a large decrease in sea level when plate tectonics drives their continents onto the night side, but would not experience complete day-side dessication. Only planets with a geothermal heat flux lower than Earth's, much of their surface covered by continents, and a surface water reservoir O(10 %) of Earth's would be susceptible to complete water trapping.

A Venus with magnetic field

Venus is planet that rotates very slowly. It's not tidally locked, but even if it was, the climate would not likely be affected because thick atmosphere distributes the heat evenly to the night side. A problem with Venus is that it lacks water. It likely had water in the past, but lost it all to the space. However, if Venus had substantial magnetic field, like Earth, its atmosphere would be better protected from solar wind, perhaps enough to keep water for billions of years.

Note that this is a "formal solution" - the planet will be wet, but conditions would likely be not what you wanted. It will be hot and humid, maybe not as hot as Venus, but still unlikely to be habitable for humans.

Well, the real answers that you are probably looking for have already been posted (glacial flow and libration/nutation), so I'm gonna add a frame challenge.

Why does solid or liquid water need to get back to the dayside?

Say the world doesn't have enough water for nightside glaciers to make it back over to the dayside, so almost all of the world's water is locked up permanently in ice. Even then, it will only be almost all--because ice still has a sublimation vapor pressure. That means that there will still be water vapor available on the dayside. Now, terrestrial organisms don't actually much care about whether or not there is any liquid water in their external environment--only whether or not they can maintain liquid water in their own cells. And in fact, we have many examples of desert-dwelling terrestrial animals which never drink, and get all of their water from the food they eat, and their own metabolism (note that respiration produces water as a byproduct).

So, you merely need to ensure that plants can acquire their water from the air, and then animals will take care of themselves. (Although animals may find it advantageous to be able to retain water from the air as well.) So, you just need to have some plants evolve to produce and tolerate high concentrations of deliquescent compounds (i.e., materials that are so strongly hygroscopic that they will dissolve themselves by pulling moisture out of the air) in their tissues. Things like calcium chloride and sodium nitrate. Or even hydrogen peroxide.

I think the models for habitable tidally locked worlds have oceans that are liquid around the whole planet. The floating ice insulates it on the dark side, and circulation replenishes it as it evaporates on the daylight side.

You could even imagine continental drift moving a continent to the dark side, locking all the water into a giant icecap, and then having the oceans reform half a billion later as the continent drifts to a warmer region.

Not the answer you're looking for? Browse other questions tagged science-based planets weather habitability climate-change .

4
Can I have a glacier on a tidally-locked shallow-sea planet?
5
How do you map the climates and biomes on a tidally locked planet with no Coriolis Effect?
4
Looking for a review of my tidally locked red dwarf planet system specs!