How could I scientifically explain a world with day/night cycle only on the equator?

I'd like for the area in the middle, especially around the equator, to be more temperate and have a day/night cycle of sort (most settlements would be there).

Is there a way to explain it scientifically, maybe through the positioning of multiple stars or other celestial bodies?

Your planet is a rogue planet near the center of an active galaxy.

Active galactic nucleii, AKA quasars, produce enough light to create a habitable zone tens to hundreds of light years wide, rather than a measly fraction of an AU. Orbits in that habitable zone can take thousands or millions of years--i.e., timescales that are relevant to ecology, and much longer than any human civilization has lasted. You just need to set your story close to one of the solstices, so it's summer at one pole and winter at the other. On the scale of the lifetimes of everyone in your story, and their grandparents and grandchildren, it might as well always be light at one pole, dark at the other, and cyclic at the equator.

There will also be random fluctuations in light levels as larger or smaller masses get sucked into the quasar's accretion disk, varying on timescales from hours up to months, but you can just say by way of authorial fiat that the particular galaxy this world is in happens to have a remarkably stable quasar which has been putting out roughly the same power for millions of years, and will continue to do so for as long as your story lasts.

If you want to have well-defined years, just make it orbit a small star that provides insignificant light and heat (like a red dwarf, or even a brown dwarf), or a dead star like a neutron star.

Your unfortunate world is tidally locked... and had a relatively recent collision with another planet.

For millions of years, it was tidally locked. Life sprang into being along its temperate equator, never knowing anything but eternal dusk, sandwiched between hemispheres of cold darkness and scorching daylight.

Then another planet, small compared to your world but still more massive than any asteroid ever to strike the Earth, collided with it. Since then, the momentum of the impact caused the planet to wobble. Not enough to fully break the tidal lock, but enough that a band near the equator spends half its time facing the sun and half its time facing away. This, effectively, gives you the day-night cycle you're looking for. The life that miraculously survived the impact has since recovered and has adapted well to the pattern of night and day, just like life on Earth has.

Eventually, tidal locking will slowly take over again, causing the wobble to fade, but this could take anywhere from a few million to hundreds of millions of years, depending on various parameters of the planet's orbit. In the meantime, this scenario fits your requirements to a T!

The gas giant would have to be tidally locked or else the habitable moon would not have the eternal day/night.

The moon of the gas giant would need to rotate at 90° axial tilt. The axial tilt would be needed to create a stable orbit in the right spot for the habitable moon.

The habitable moon of the moon would not have a lot of axial tilt (around 10°) but it would have to have some or else there would be no day/night cycle along the equator. 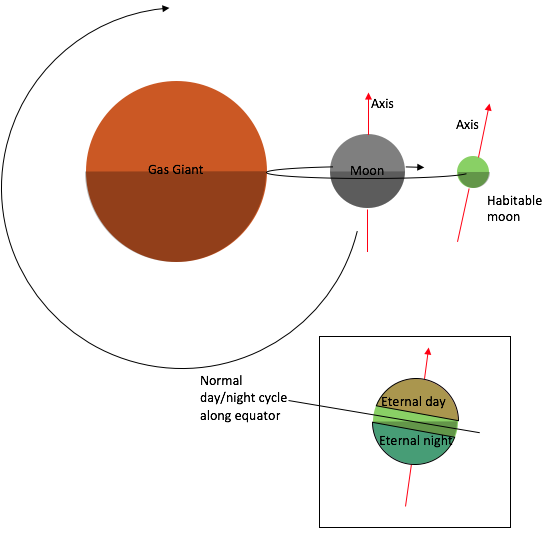 Not the answer you're looking for? Browse other questions tagged science-based climate solar-system day-night or ask your own question.

7
A world with only sunlight and a world with no sunlight (Fantasy)
11
Is it possible to have a planet that has seasons and is also cold at the equator and hot both poles?
3
How do I explain the formation of my world scientifically?
2
Would a temperate “land of the midnight sun” be habitable?
2
How would the length of a day-night cycle affect a planet's climate?
3
How would a 384 hour day/night cycle on a desert planet affect the weather?
7
Realistic ways a Planet or Large Moon could have Variable Day/Night periods
4
Alien Speices with extreme day/night cycle