How Efficient Could Anaerobic Megafauna Be?

Obviously, if available, atmospheric oxygen is a great source of energy. However, I'm surely not the first worldbuilder who wants an alien species which doesn't depend on it (whether due to having evolved on a largely oxygenless planet, or because of bioengineering that happened once the civilisation got advanced enough).

The question is, even in the best-case scenario (i.e. the most efficient plausible anaerobic metabolism within the constraints below), how inefficient would energy generation be for such an alien? I'm thinking primarily in terms of how much more food would be required for maintaining a level of activity similar to the one mammals, birds, reptiles etc. are capable of, but maybe I'm missing other forms in which inefficiencies would express themselves.

For bonus internet points, I would also like to know whether ability to switch between aerobic and anaerobic energy generation methods would result in a significant reduction of the efficiency of the former and/or latter, and/or carry other drawbacks.

Okay so this table lists anaerobic respiration pathways and the reduction potentials they produce, as alternative pathways use either primary reduction or primary oxidation as a gateway to the Krebs cycle we can treat the EO' figures in the table as absolute values. I've made a personal call that the most accessible respiration pathways for large life forms are gas-in and gas-out rather than those requiring either an electron acceptor that's solid or liquid at room temperature such as the metal reducing paths, or producing such a compound as with acetogenesis. Based on that assumption we want to look at the methanogenic Carbon Dioxide breathers for maximum efficiency, this pathway produces an EO' of just -0.25V. Mitochondrion is the standard for aerobic respiration which produces a redox potential of 0.82V, so mitochondrion equivalents based on something similar to Methanosarcina barkeri would therefore have roughly 30% of the energy output of their oxygen dependent counterparts. Creatures using methanogenic mitochondrion-like organelles would breath in Carbon Dioxide and breath out Methane while using a body chemistry that is otherwise quite similar to what we're used to seeing, the only other "must change" I can think of is hemoglobin which would need to be swapped for a compound that carries Carbon Dioxide in and Methane out.

For a natural ecosystem the plants would have to follow a pathway of anaerobic oxidation of Methane, to supply a high Carbon Dioxide atmosphere with balanced Methane depletion. If this is nitrate driven then they could be functionally similar to Earthly legumes, which includes everything from clover to the acacia tree.

To answer without having to research complex non-oxygen based metabolic pathways: why not just photosynthesise? After all, you've only stipulated that atmospheric oxygen is a no-no, and a truly "oxygenless planet" sounds kinda unlikely (its the 3rd most abundant element in our solar system and the milky way as a whole).

This requires a ready supply of water and carbon dioxide, which isn't a wholly unreasonable requirement... primeval earth managed it, after all, and given that hydrogen, carbon and oxygen are in the top 4 most common elements out there it would be surprising if they weren't heavily represented on many extrasolar planets.

Let us consider the cow. According to this document on cow nutrition and energy budgets, an "average cow" (whatever one of those might be, but this one weighs ~590kg) uses about 40Mcal a day (that's about 40MJ in sensible units) to totter around and keep itself alive each day (compare this with the figures in theh green cow XKCD what-if). The XKCD guessimate is that a solar-powered cow might get a mere 2MJ/day from sunlight, which is clearly insufficient.

There's plenty of scope for improvement in photosynthesis, certainly: only about 28% of incident light is actually collected by chlorophyll and the glucose synthesis process is only about 30% efficient. Small improvements (of the order of 17%) have been made in transgenic tobacco plants.

An increase in surface area is also a possibility... large fixed plates and fins are found in various dinosaur species, and many other animals have fans, manes, crests and webbed limbs, though further speculation on means of increasing animal surface areas drifts pretty quickly outside of the "hard science" requirement.

A combination of both surface area and photosynthetic efficiency may be able to bridge the 20-fold metabolic gap. You may handwave that as you see fit.

There's another alternative, of course. Cows are of course endotherms, and that means that they need to run their metabolism at a moderate level all the time. Poikilotherms, on the other hand, are adapted to very low levels of metabolism... necessary for an animal that might have to cope with low body temperatures, being unable to warm itself to any great extent. Crocodile Standard Metabolic Rate runs at approximately one tenth of some average mamallian (whatever they might be) of the same weight's Basal Metabolic Rate. Suddenly you're not dealing with a 20-fold gap but more like a 2-fold one, one that could reasonably be bridged with moderate increases in surface area and photosynthetic efficiency.

They might spend long periods building up energy reserves, effectively hibernating at night (or during bad weather) and remaining more or less motionless during the day. When the need arises, crocodiles are capable of developing considerable amounts of energy via anaerobic metabolism alone, able to ambush, fight or flee if required. The energy might even be useful for thinking if you wanted a really far-out, off-the-wall idea.

Here's one potential prototype for your beasties... the dimetrodon. 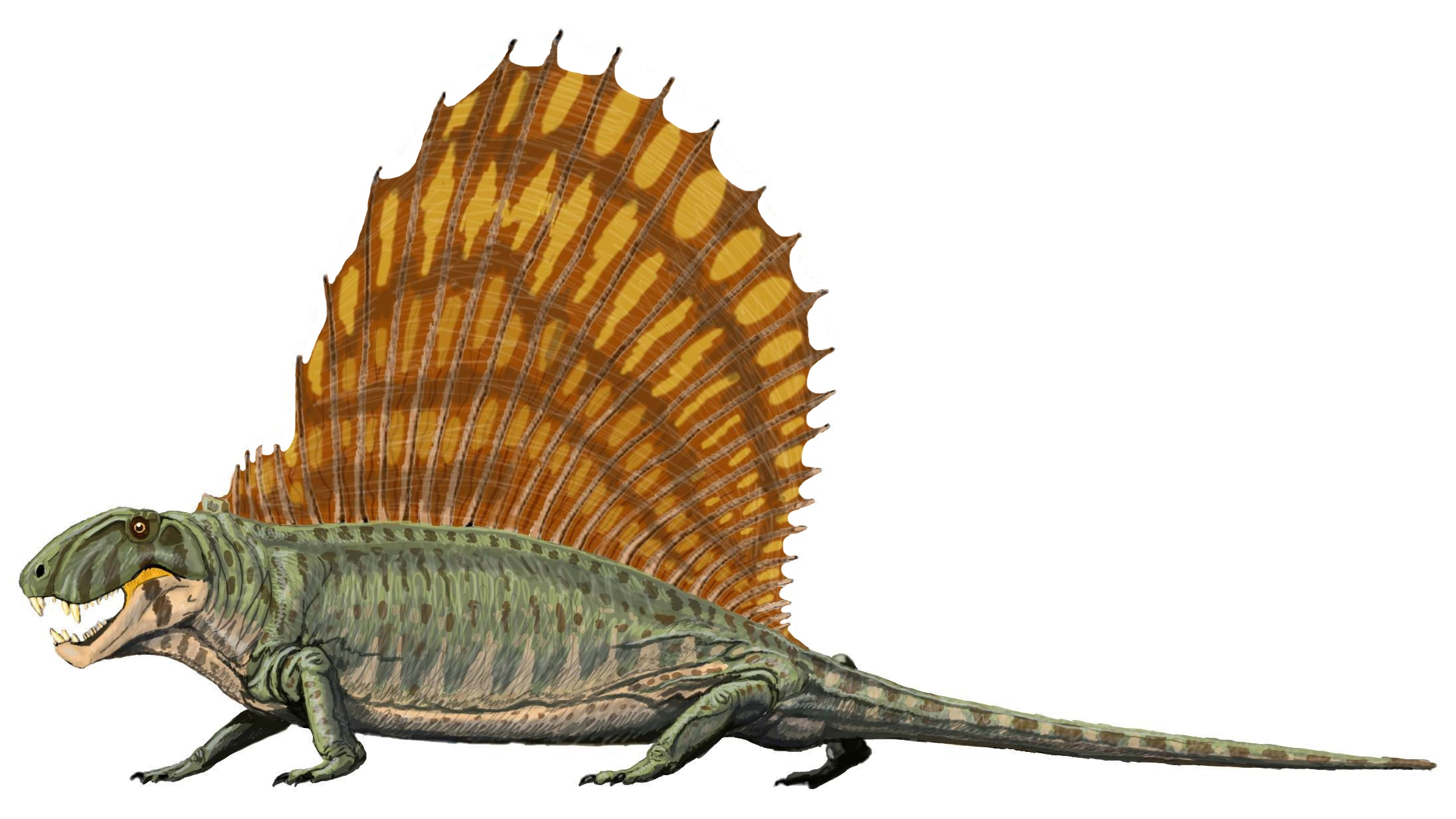 You asked for actual efficiency numbers for anaerobic metabolism... well, looking at terrestrial metabolic pathways, one measure of efficiency is perhaps the amount of ATP you get per molecule of glucose. Anaerobic glycolysis, the process which your cells (especially your muscle cells) will use under perods of highg energy demand and insufficient oxygenation, produces about 2 molecules of ATP per from the energy available from the metabolism of one molecule of glucose. Aerobic metabolism manages more like 34, out of a potential maximum of 38. The resulting large amounts of lactate can be recycled via the Cori cycle if some other means of ATP production is available, but it does require energy and it is no good if that energy is produced by a means that generates more lactate.

What other means might that be? Well, of course photosynthesis produces oxygen as a byproduct. Plants just release waste oxygen into the atmosphere, but your beasties could reasonably store it in their lungs, taking perhaps a whole day to take "one breath" of pretty pure oxygen. That gives an excellent reserve of oxidiser for regular glycolysis. There are perhaps some other more off-the-wall means of storing oxygen for later use... intracellular stores of peroxide, perhaps, but that's wandering quickly out of the hard science regime.

Not the answer you're looking for? Browse other questions tagged biology xenobiology hard-science energy biochemistry .

4
Making a plant as energy efficient as possible
2
How much blood is needed to forge a sword?
13
Reality Check: Megafauna and Dinosaurs
16
How might kinetosynthesizing "plants" look?
2
Anaerobic Fungal or Plant life
9
What could be used as an alternative to ATP in boron based biochemistry?
3
How to make ammonia-resistant organisms through their biochemistry?
6
Plausibility of Tribe-Sized Megafauna
4
How could my animal claws work realistically?