I'm writing a story taking place in the semi-recent aftermath of a period of Human-Dragon warfare. The main character falls into a pit used during this period by dragons to trap/store/dump prey (humans).

For aesthetic purposes I'd like there to still be recognizable human bones, possibly still bits of flesh. My question is how long would it take for bones to become brittle, to the point they would snap when stepped on without crumbling and would there still be any flesh? Also could a snapped bone become a dagger of sorts? One time use only, just to help the MC get out of the pit. The warfare period lasted for some time (still deciding just how long), so it's likely there would be remains from a range of years.

Also for context, since I know that climate and other factors affect decomp, the environment is somewhat humid with a mild range of temperatures. The pit itself is in a forest, dug into the mud, probably largely clay in nature, and roughly 15 feet deep. Rain is not uncommon in the region, but the pit is largely sheltered from rainfall by trees. Flooding is obviously a consideration with these parameters, but whether it's the dry season or the pit is somehow protected from flooding, at the point the MC is in the pit there is no standing water.

I am not an expert, but if the practice of digging up monk bones after they die says something then I would say that in 7 years max, your human would not have a single bit of flesh on him. Now you said that the soil is full of clay which is a great preserver of bones, so for bone to snap like poorly made ceramics it would take over 50 years minimum. You can still use the bone for a weapon even after a lot of time has passed only that your knife would become more of a one use weapon as the years fly by.

In the kind of environment you're describing, I'd argue that the bones of the previous victims could be there for up to a century depending on the details of the environment.

Bones are not as long-lasting as some people think under less than ideal conditions, and the link attached goes into some good detail about the variances in how long bones will last in the environment, and some of the causes of them breaking down.

As for the fleshy bits, I'd expect, especially in a cool dark pit, that insect life in particular would have made short work of most of it and I wouldn't expect any of it to survive more than a year. But the bones might be there for much longer, especially if you have kept a lot of the moisture out of the pit (which isn't likely just from tree cover). Also, a permanent lack of moisture would decrease overall decay and also make it harder for microbial life or insects to survive in the environment as well, further limiting the rate of decay.

Given what you describe however, I'd imagine that the pit is relatively dry, meaning that it gets wet enough to support a healthy colony of microbial life and insects, meaning that your flesh would likely be gone inside a year, but the bones could last considerably longer although unlikely to last more than a few decades. In point of fact, the longer they are there, the more likely they are to go brittle and not make good daggers and the like. So, if the bones are an important feature of your hero's escape plan by fashioning weapons, I'd throw him in the pit no more than 5 years after the last victim, just in case.

Your best bet for a relatively long preservation time is to have the pit dug into an old riverbed (or on a river floodplain), this gives a silty clay-rich topsoil over layers of sand and gravel, making for a reasonably damp environment in the rainy parts of the year but the good drainage that will keep the hole from waterlogging. Complete drying for several weeks in the summer months will be important to retard plant growth in and around the pit or the trees will reclaim the open ground it represents within a decade. The sand layers in the pit wall will also make the pit slightly easier, though by no means simple, to climb out of. It should have been slightly undercut in it's original construction to hamper would be escapees, this will eventually collapse but that can take years.

Some of the best preserved bone available to the protagonist will be that buried in the mud in the bottom of the pit, particularly the arm bones. The arms will have had to disarticulate from the skeleton before being buried, this will happen due in part to decomposition but mainly because of insect scavenging so they'll be almost fleshless and reasonably dry when they go into the mud. Said mud will be largely composed of clay washed down from the topsoil and will form an anaerobic environment that will slow further decay of anything buried in it. Anaerobic environments like lake beds and bog sediments have been known to preserve bone for literally tens of thousands of years under the right conditions. The leg bones buried with the flesh on will be subject to greater decay as the flesh supplies moisture, salt and bacterial decay enzymes to the environment around them in the ground but they'll be a so-so second best. The dry rip cages, vertebra and skulls left on or close to the surface will be brittle and crack when stepped on while the buried material will be wetter and can be carefully dried and used for makeshift weapons but any weapon made of bone will be fragile compared to an equivalent in wood, stone, or especially metal.

I imagine your pit can behave a bit like a mix between a peat bog and a Lagerstätte, both known for anoxic conditions allowing for very slow decomposition. For your pit to have some of the same characteristics, these conditions have to be met to some extent:

Unless you need extremely slow decomposition rates not all of these has to be met to the tee. As this pit was used actively for many years before it was abandoned you can adjust these parameters so that you have a vertical gradient of decomposition. Say the water level has varied somewhat, so only the lower part of the pit has been permanently water logged, then the surface remains will be mostly bare brittle bones, but as you dig down a meter or so bones, flesh, skin, most things except the very softest parts, like the eyes, will be well preserved.

Be careful though. As the main condition for this is an anoxic environment, there won't be much oxygen for your trapped human. Carbon dioxide, methane and hydrogen sulphide will dominate, especially as they thrash about disturbing the muddy, rotten goo, releasing pockets of trapped gas.

Based on your description the bones will not last long. Forests are just about the worst conditions for bone preservation. A few months to a few years at best. Flesh in particular will be gone in weeks or months.

A pit in a forest will alternate between wet and dry and leaf litter will turn it acidic, wet, and aerobic, these are some of the worst conditions for preserving bone. I would not expect any identifiable bone to last more than a few years. Bone will be both mostly destroyed and become unusable for tools within a few months. the Climate matters, I assume mild means warm, warm conditions result in faster decay, while cold conditions will prolong it so it depends on your definition of "mild". Forests are really bad places for bone preservation, and the organisms in them often actively destroy exposed bone for the calcium. I would not expect to find anything identifiable within a few months to a few years (depending on what you call identifiable (that is Bob vs that is human).

Of course if they are in a forest, they can also have fallen branches for tools. If there are a continuous supply of remains being dumped in the hole there will be a plentiful supply of scavengers and their predators which could provide the hazard you are looking for but will also speed up decomposition. Letting the pit stay partially full of water will help slow down decomposition, or allowing for a more temperate climate will as well. 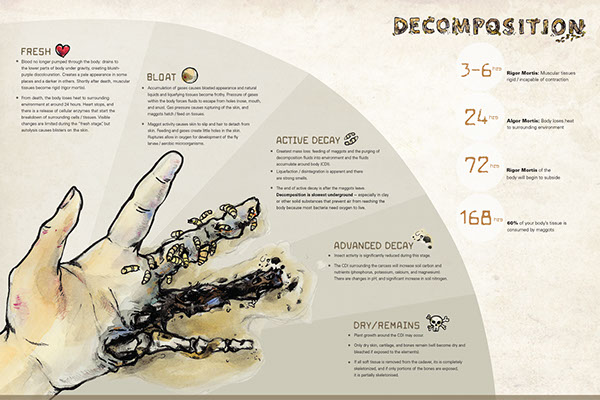 Not the answer you're looking for? Browse other questions tagged humans death bones .

5
Creating a species with birdlike bone structure
2
Dense Bone Weapons
26
What sort of beak would a bone marrow eating bird have?
4
What sort of hip bone is required for quadrupedal animals to locomote on their hind legs?
5
Could bones (or bone-like structures) evolve from muscle tissue?