How to determine port and starboard on a rotating wheel space station?

The ISS uses port and starboard to differentiate between the two sides of the station. 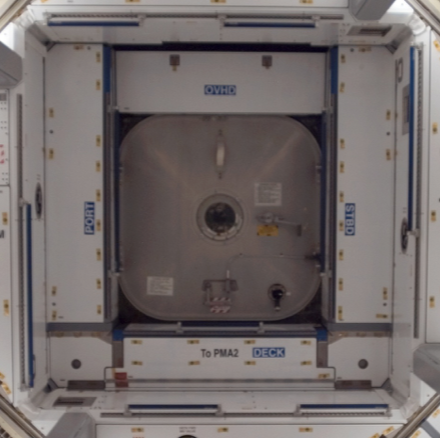 Would forward always be in the direction the ship is rotating, and from there port and starboard would be determined?

Consider the Earth. Right now we're all on the outside of a rotating spherical object, which is essentially the inverse of your scenario, and yet people don't require massively complicated 3D navigational systems to get from place to place or to give directions. East is the direction in which the planet is rotating, and the other directions derive from that.

Using cardinal directions works for planets or fixed structures on those planets, but people will likely have a psychologically hard time using it for a space station. The easiest way I can see it working is as follows:

Simple, and straightforward. Because the spin direction is fixed, it's something everyone can agree on, and because you've got simulated gravity, everyone has the same understanding of "up" and "down", just as we do on Earth, albeit with "up" and "down" reversed relative to the spin axis. Everything else derives from that.

Note that from the outside, the system still works. Assuming the docking is carried out somewhere near the axis, the only thing that's important is from which direction the docking ship is approaching, and that's trivial to figure out: if you're approaching the space station along the rotational axis and it's spinning clockwise from you're point of view, you're on the port side. If it's spinning counterclockwise, you're on the starboard side. And that concludes your navigational difficulties.

Something like a pair of counter-rotating O'Neill cylinders represent something of a different issue, as their movement is symmetrical from the outside (internally, easy: each cylinder would have its local directions based on its individual rotation). In that case, you need to arbitrarily define the ends of the cylinder: there's no "natural" way to do it. You can call them what you want, and then simply broadcast (and display by strobes/lights) which end is which.

There is another way to consider direction in a rotating station (and a spaceship with a rotating section). Consider the following diagram: 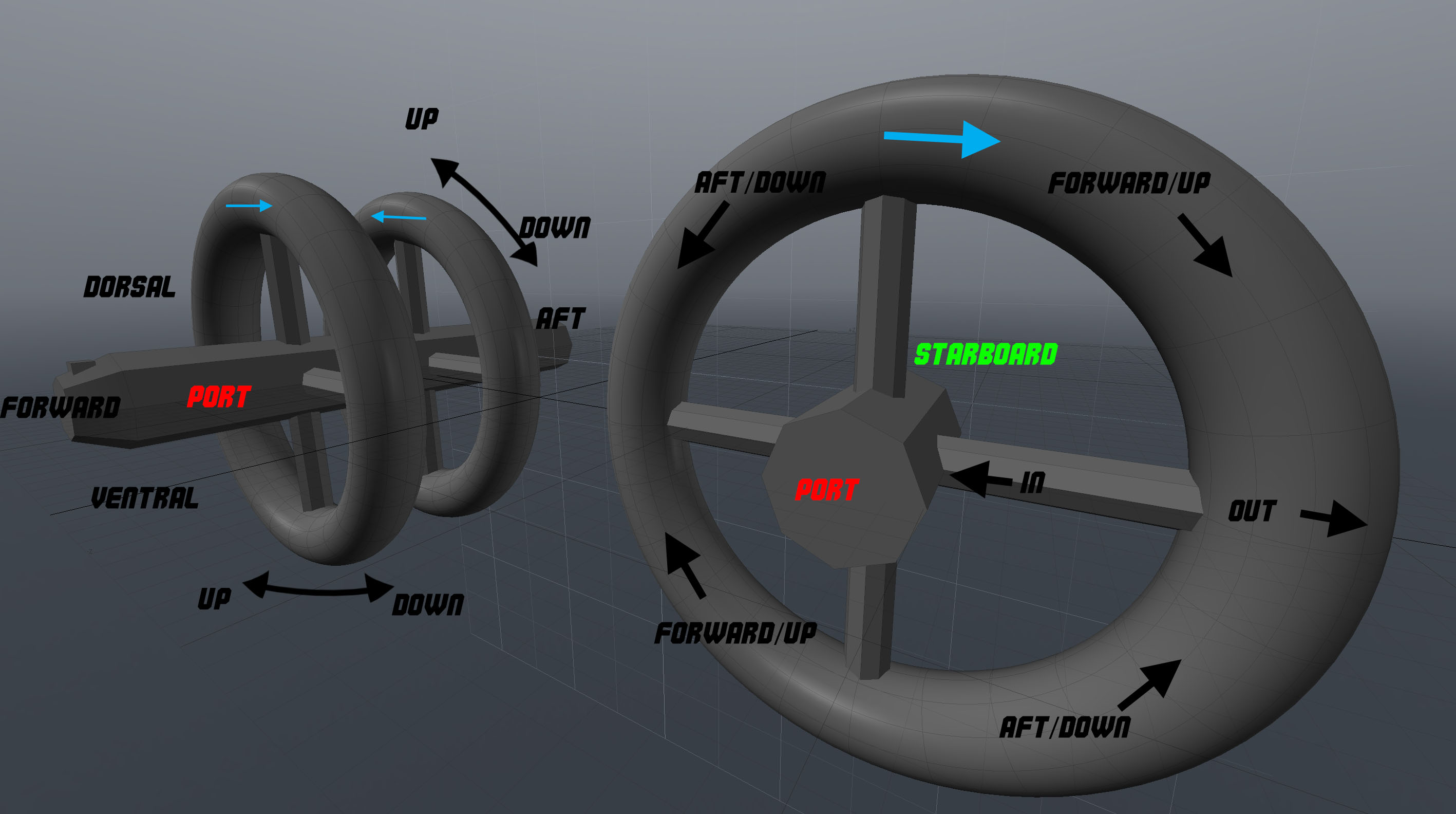 On the left is a spacecraft with two counter-rotating sections to minimize torque when maneuvering. On the right, a classic fully rotating wheeled space station. On both, "in" is toward the rotational axis, "out" is away.

On the ship, forward and aft is trivially designated. Assuming the stationary (middle) section isn't rotating, our ship has a bridge in the little box on the front. If it's on the "top", then that designates the dorsal side, and port and starboard (the latter not labeled) are also trivially identified.

But what about direction on the rings? Forward and aft is trivial, because that matches the ship. The forward sides of the rings looks to where you're going, the aft sides look where you've been. But what about direction going around the rings? There's two ways to do it. You could state that if you look forward, right and left are automatic, regardless of the ring's rotation, and would be identical in both. This provides justification for differentiating "port" from "left". If you say "go to port", you know it means the left side of the entire ship. If you say "go to the left", you know it means in the rings turning toward the left and moving that way. Instead of turning left and right, you'd turn forward or aft. Still possibly confusing however.

The second way is more interesting. Imagine yourself standing inside the ring as it rotates, and you're facing the direction of rotation. If you through a ball forward, because of the rotation, it will always hit the floor, no matter how fast you throw it. But if you throw it backwards, in the anti-spinward direction, it will travel further and you could, theoretically get it into "orbit" so it never hits the floor. In other words, for a throw with a set launch angle and a set velocity, it will go further anti-spinward than it will go spinward.

Almost as if you were standing on the side of a hill and throwing the ball. If you throw down the hill, you're going to get more distance than throwing it up the hill. Which means, that if you're looking in the spinward direction, you're looking "up".

So there's our cardinal directions in the rings on the spaceship around the circumference. It could be used on the station (and I labelled them as such), but it's more useful on the spaceship. If you're on the front ring and told to go "down" the ring, looking down the long axis of the ship means you're walking counterclockwise. If you're in the aft ring, you're walking clockwise.

There's really no reason to assume they would use port and starbord. However, if we start from the assumption that the nautical orientations (port, starbord, fore, aft, deck, overhead) will be used, the only practical direction "fore" could be is along the direction of movement. That would pin port and starboard down.

However, there are plenty of other systems out there that might be used. You might leverage the right hand rule and define them as "along rotation" and "against rotation." The right hand rule is almost universally agreed upon to be the correct way to assign direction (which really means that physics majors get violent really quickly if you try to shove a left handed coordinate system on them, and we don't like to seem them violent!) The port/starboard directions will always be either in the same direction as this rotation vector, or opposed.

Other cultures might also have their own opinions. From the reading I have done, the Chinese often deal with directions using cardinal directions. While we might say "walk down this street, take a right, and then take the next left," they might say "walk north, then turn east, and keep walking until the next chance to turn north." More interestingly, I have heard of these directions being malleable. Some martial arts schools teach that "south" is always the side that the teacher is on, regardless of the cardinal direction. This is very convenient because it makes the instructions the same, no matter what direction, while retaining the absoluteness of the direction giving they are used to.

A Chinese station might choose to label the directions north, south, east, and west, based on the position that the captain of the station is facing when he is at his post.

Depending on what orientation the spinning satellite is in, constellations might be used. We often specify coordinate systems that point towards particular zodiacs during the vernal equinox to disambiguate like this. We might talk of a rotation towards Libra or Gemini. If the spin is not in a convenient direction for this, we might pick major stars

Space is 3D, so simply differentiating front and back isn't good enough. You need a plane that port and starboard are normal to. So you need something non-rotating down the middle; something ventral or dorsal.

Internal to the rotating section, port and starboard are meaningless. I would split it into hemicircles, much like the Earth's hemispheres. And I would refer to directions as fore and aft, or upspin and downspin.

The origins of the words "port" and "starboard" may be useful to consider here. Early ships did not have a rudder built into the hull, but instead used a modified oar - or later, a larger and more sophisticated steering-board - positioned at the helmsman's right hand. To prevent damage to these devices, the opposite side of the ship had to be moored to the wharf, hence "port side" and "steer board side". A certain amount of lexical drift resulted in "starboard" for the latter.

The practical upshot is that port and starboard are synonyms for left and right respectively in the direction of travel. So they only make sense for a vessel which has reasonably consistent "forward" and "up" vectors.

The ISS, even though it is a space station existing in microgravity, is such a vessel:

Nominally, the ISS flies in an LVLH (Local Vertical Local Horizontal) attitude. That means that the vehicle pitches at four-degrees-per-minute in order to keep its belly pointed towards the Earth. So, nominally, the orientation of the ISS appears rather consistent with respect to the Earth.

This is desired because the vehicle was designed to be in an attitude in which the comm antennae pointed up at the TDRSS, the GPS antennae point up at the GPS satellites, the thickest shielding is in the direction of greatest debris damage risk, the windows point towards Earth for Earth observation science, and other external payloads can point at their desired topic, consistently.

However, this would not be true of a wheel-type or cylinder-type rotating space station, whose gyroscopic properties would keep it pointed along a consistent axis instead of in "local attitude" - unless the axis of rotation happened to be aligned with the plane of orbit. That would actually be a reasonable orientation for a wheel-type station, but not for an O'Neill cylinder which must keep its axis pointed towards the local sun.

A far more reasonable organisation for both types would be compass directions. As seen from above the North Pole, the Earth rotates anticlockwise, resulting in the Sun appearing to rise in the East. Analogous definitions result in natural N/S/E/W directions in a rotating wheel or cylinder. Up and down would be reversed relative to a rotating planet (ie. up is inwards), due to the direction of apparent gravity.

Note however that a common design for O'Neill cylinders is as a pair, rotating in opposite directions, so that the common axis can be precessed to follow the sun through its orbit. In such a design, north and south would be at opposite ends in each cylinder, so would not be useful for locating external non-rotating parts of the station (though residents probably wouldn't care). In such cases, an additional set of directions based on the "hot" and "cold" ends may prove helpful.

Do it like the Right Ascension of the Ascending Node (RAAN) in orbital mechanics. Chose a reference frame and link your starboard and port to that.

On the rotating part, they could then use the same designations depending on the hour of the day (or minutes, if it spins once or twice every hour). People would just have to look at their watch to know on which side they are, similar to us knowing on a cloudy day where the sun is if we know the time and where south is.

On a very large wheel, the day and night cycles could help. At noon, starboard could be determined to be right, at sunset it would be up, at midnight left and at sunrise down. Or the other way around.

Not the answer you're looking for? Browse other questions tagged space-constructs navigation or ask your own question.