How can a pocket of technologically advanced humans survive the apocalypse?

In a post-apocalyptic novel I'm writing, I plan to follow up with a sequel wherein the main characters are trapped in a hidden city in North America called Eden that has electricity, underground trains, organized society, etc. It exists entirely underground and has existed since the start of the apocalypse. My actual story occurs about 200 years after the apocalypse (a worldwide nuclear war).

Now, I know that a lot of novels with dystopian/post-apocalyptic themes have hidden cities that remain advanced despite the events of an apocalypse, like the outside world in Divergent and District 13 in Hunger Games.

But just because it's been done before doesn't make it plausible. I want to be able to explain Eden's existence; Suzanne Collins, for example, never really explains how District 13 was able to build an underground city without any resources from the Capitol. 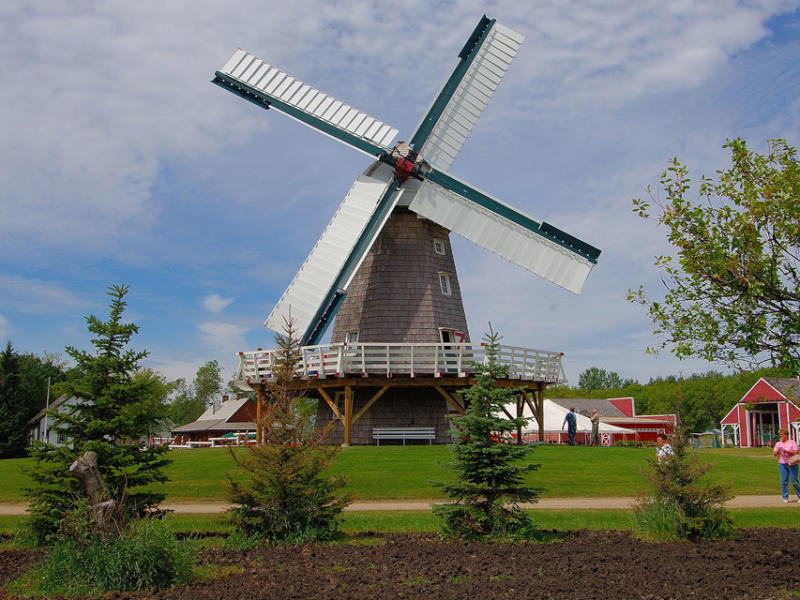 The Mennonites are like the Amish, but not averse to tech. The apocryphal story I heard (or maybe it was about Hutterites) was about the John Deere salesman who was enthusiastic to get an order for a big generator from the village. About a month later they asked him to come pick it up because they did not need it. When he arrived he found his generator, with another one sitting next to it that they had built. They needed his generator to see how they were made.

You could have a group of these folks - make up your own along these lines so no-one gets salty. They see it coming. They do what they need to do to make sure their people survive. On the other side, they have tech and specifically tech they can maintain: wind and water, wood fired generators etc.

This community is insular but they are Christians. When the hammer comes down they do not turn away people seeking refuge and their numbers swell. They prepared for that too.

This will add energy to your stories. It is not somehow Indianapolis transported into the future. It is a village which has survived alone because the people there planned to survive alone. They had been planning to survive alone for hundreds of years before the apocalypse.

In Larry Niven's Lucifer's Hammer, one of the main characters, a rocket scientist, who is aware that a civilization ending asteroid strike is imminent, spends the last few pre-apocalypse hours gathering science and engineering books which he carefully wraps in plastic and stores at the bottom of a well. In the aftermath, those books and the knowledge within them are enough to purchase him safety among the war lords as a would-be Merlin.

I rarely admit to being a closet prepper, but I have a similar collection of technical books and a bunch of industrial garbage bags sitting in my closet, just in case.

All you need for your story is one supporting character who was a Niven fan.

The entire world is already supplied with underground shelters for the apocalypse of various sizes, from the basements of urban buildings prepared as civil defense shelters in the 1950's to underground command and control bunkers in the United States, Russia, China, the UK, France and in many other nations as well.

The vast build out of these shelters during the Cold War was in principle to shelter sufficient people and equipment to allow for rebuilding after a nuclear war. Some were fairly rudimentary, for shelter during the immediate attack, like civil defense shelters in the US and the Moscow subway system. Others were fully equipped long term systems such as the NORAD defense complexes in Colorado and North Bay. There are also alleged "secret" bunkers, such as the complex supposedly dug under the Denver airport.

There are several ways this could be handled in story terms. Fully equipped and functioning bunkers already exist, but are owned and manned by military of government personnel. These people are also the best organized and equipped to deal with long term existence underground and the ability to recolonize the surface afterwards.

Many cold war bunkers were decommissioned after the Cold War ended, but since they were built to withstand nuclear attack it is impractical to dismantle them. It may be possible for civilians to have access to them, such as the "Deifenbunker" near Ottawa, Ontario, Canada, which has been restored as a museum. If the inductions that war was coming were clear and with enough advanced notice, the museum staff could possibly stock the bunker and seal the doors. It would not work as well as the fully stocked and prepared bunker in the 1950's and 60's, but would be far better than anything else. There are also people who have purchased decommissioned nuclear missile silos who would have the same intrinsic level of protection.

It is very unlikely that even the NORAD bunker in Colorado Springs would be able to be viable if sealed for a century, but then again, even an all out nuclear war would not be as damaging as you seem to think. Nuclear weapons are much smaller in power than during the height of the Cold War (yields in kilotons rather than megatons), and nuclear stockpiles have been drawn down over the years from the tens of thousands in the Cold War era as well. The heightened accuracy of delivery systems means fewer and smaller weapons are needed today.

So long as the bunkers can be sealed prior to the attack, they can survive for periods ranging from days to years, but that is all they might need. So there is no requirement for an Elon Musk to build a secret underground city: there are already hundreds of bunkers around the world built for that purpose already.