In an alternate reality scenario that takes place during the renaissance, how can the world create a helicopter? Aside from the obvious need for machines, factories, and aviation knowledge, what other obstacles would inventors face and how would they overcome them (swashplate, engine, etc.)?

To make a helicopter fly, you need a relatively high power-to-weight ratio. Early helicopters used piston engines, but most modern designs use gas turbines. Still, they have problems getting their payload airborne, especially in hot and high conditions.

With anything remotely like the renaissance, your power plants will have insufficient power-to-weight. Engines, gearboxes, airframe, everything will be much heavier for the same performance. If present-day helicopters are only marginally able to fly, yours will shake itself apart on the ground. So there are three options:

As noted, steam engines are fare too heavy (or have a low power to weight ratio), particularly if you are trying to "invent" one in the 1500's. Alternatives like Stirling engines would be somewhat better (since they don't have the mass of the water and boiler to go with them), but not by enough. Relatively high power to weight ratio Stirling engines had to wait until the 20th century, when auto makers considered them as a possible alternative to IC engines for cars. This combined a true need with the benefits of having a large and very sophisticated technological foundation to draw upon.

However, there is one extremely wild handwave which might be barely possible: Leonardo da Vinci creates a turbine powered helicopter.

Leonardo was massively ahead of his time, but most of his inventions were impractical for the period because there was no compact power source available. His clockwork powered "car" does work as advertised, but modern replicas only go about 40 metres before the springs unwind. The team of men cranking away on his "tank" can move modern replicas over flat, firmly packed ground, but there is no possible way it could actually move cross country. The flying machines could possibly work as gliders with the wings outstretched, but no human could ever pump the mechanism fast or hard enough for the flapping motion to make it fly. 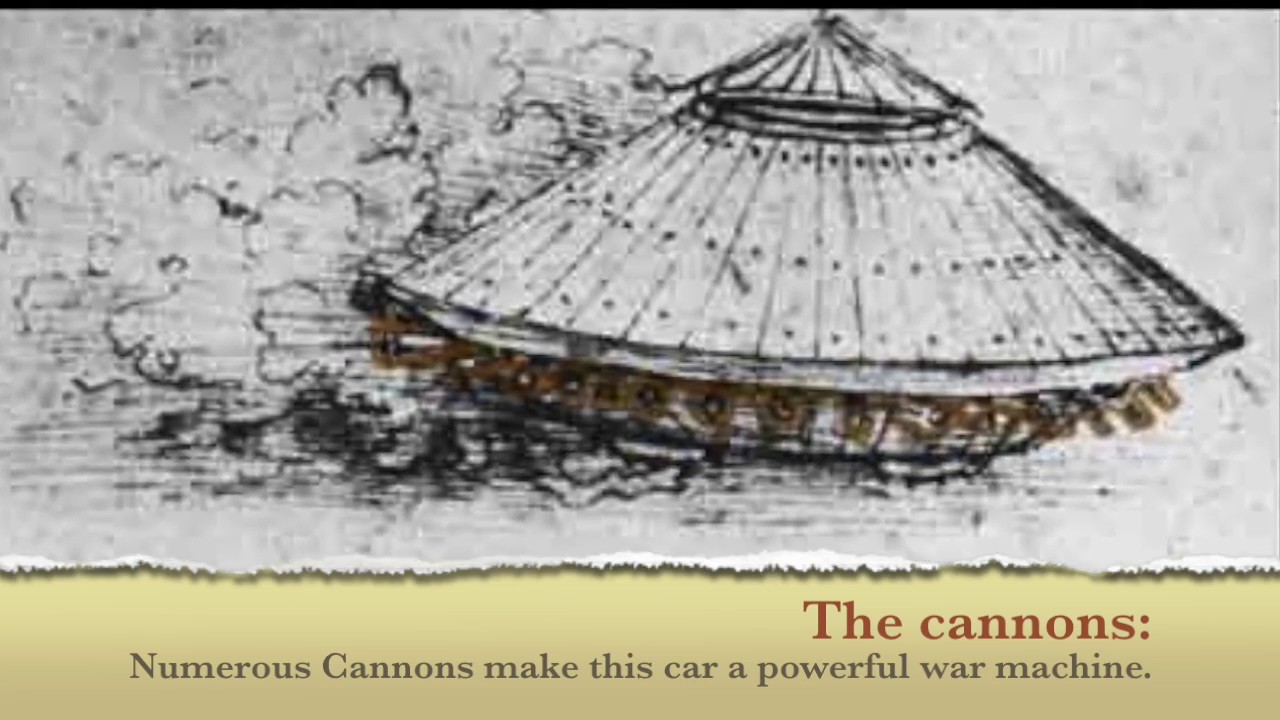 However, Leonardo also invented an early heat engine, utilizing the energy from a stove to turn a spit: 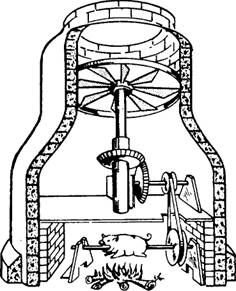 If Leonardo were to consider how to harness the energy from the jack to turn the airscrew of the helicopter, there is a (very low) probability that he might generate enough lift to at least hover briefly. Even assuming complete success, Leonardo's helicopter has no real means of control, and likely would be unflyable. 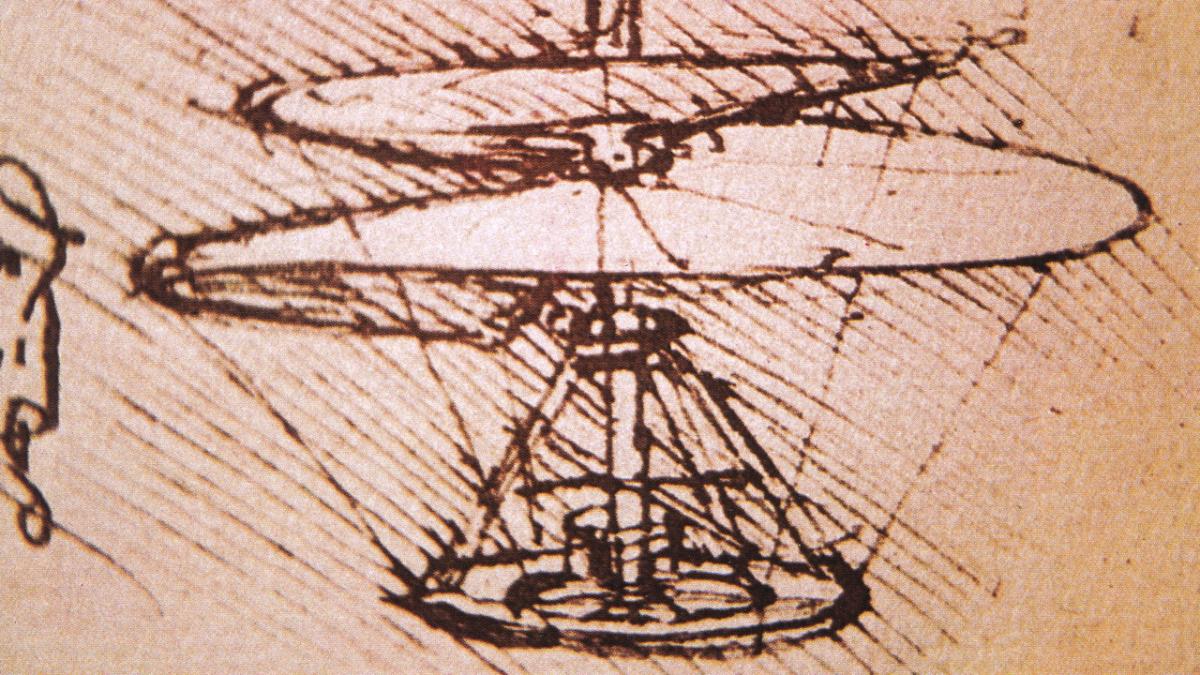 The most probable means of success would be to have some sort of clutching mechanism, and spin the airscrew up to speed by an external mechanism, such as a team of horses pulling a rope wrapped around the axle of the airscrew. Once aloft, the pilot engages the clutch and the "jack" keeps the airscrew spinning quickly enough for a relatively controlled descent. The device might "jump" into the air to the height of a low tower (3 or possibly 4 stories) then spin down to earth at a relatively slow speed (enough to walk away from).

Sadly, this story would likely repeat from the Renaissance to the late industrial age (like it did in our time line; the first successful helicopter flights took place just before WWII. Even autogyros did not fly until the 1920's, and they are far easier to create since the rotor freewheels and has no thrust delivered to it).

So Leonardo could put in heroic efforts, but end up with an entertaining toy for the Duke d'Sforza. With the technological base of the 1500's, that is about all that would be possible.

Leonardo da Vince, rather famously, sketched out the design for a mock helicopter. 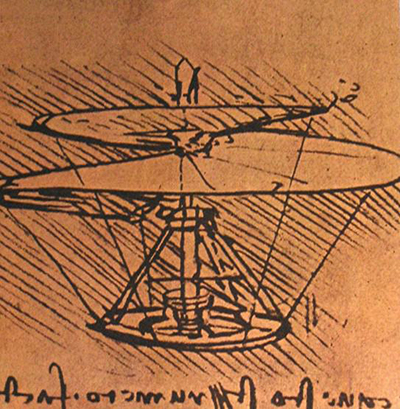 I'm not saying this specific design would work, I'm saying that the Renaissance definitely had people with the knowledge and the drive to make such helicopter if they felt like it. The math required isn't complex The main problem is that you specified steampunk, which, while a fantastic genre, uses steam powered engines. And those are heavy. Really heavy. To the point where they wouldn't work.

Of course, the large the disk area, the slower it goes because it's heavier and the motor can't catch up. A steam engine is very heavy - and takes a lot of fuel. According to this website, that all adds up to 12 gross pounds per horsepower, and yes, that's not for all helicopters, but it's a good starting point. 5443g to 745.7 watts or 7.3 grams per watts, and that gives us a maximum weight to power ratio of 137 W/kg. Which no steam engine has. So you just need to cheat. That's fine. The rule of steampunk is that you get one free pass, so all you need is an engine that works absurdly better than any steam engine has a right to do so.

As mentioned in other answers, it'd be very hard to bypass the required mass-to-thrust ratio. But do you really need the helicopter to take off on its own power?

Basically, an autogire (or a gyrocopter) is an unpowered rotor in autorotation. In other words, moving around generates the rotation of the rotor (duh) which creates again some lift. It is to helicopter what a glider is to a plane.

Autogire could be used with an engine-powered front rotor or as a way to slow down free fall while gaining some horisontal speed. Basically, jumping from a height (or from a dirigible) with an autogire should be possible, esp. if the wind direction is helpful.

Next, even if quite insane, idea is to launch autogires in a similar way to gliders, i.e. with an external power such that the device does not need to haul the engine. Railway-launched gliders and autogires, anyone?

I have recently asked how early could pulsejets been built, assuming the knowledge of their existence and designs were to be magically known. Turns out that while inventing and designing them is hard and requires modern science, they can be surprisingly easy to build from plans! The consensus seems to be that Renaissance manufacturing (and possibly as early as the Roman empire) should be up to the task.

Now look at the gyroptère: a 1913 single-blade helicopter concept, inspired by maple seed, where the entire craft, engine included, is rotating. There was a system for having the engine exhaust blast (counter-)rotating the useful charge (in that case, the pilot cabin), instead of the conventional system where the craft and charge are immobile and the rotor is rotating separately.

The concept was alas too ahead of its time, with engines of the time not having sufficient power-to-weight ratio - then it was killed by WWI and the need to expand on existing technology (namely planes) right now. After which they couldn't get funds to develop it, and then conventional helicopters were developed.

Someone apparently built a pulsejet-powered one at some point, because why not. The point is, the concept works. It has been abandoned because other technologies overtook it. But assuming those Renaissance people managed to have a running pulsejet, someone could similarly be inspired by maple seed and make one of those.

Pulsejets are nasty beasts. They run hot, are inefficient, hideously loud and vibrate like mad. Tipjets are energetically inefficient compared to conventional systems. Renaissance engineers wouldn't have access to modern steel, ball bearings or high-precision manufacture of the Industrial Revolution, and the thing would probably have high fuel consumption, high maintenance, low reliability and low lifespan, but Leonardo da Vinci should be able to build one of those.

In practice, it would probably have been more complicated, and other factors may have made it impossible in our world. But this should be plausible enough for non-magical Clockpunk.

There may be one way to make a "helicopter" with steampunk technology: hybrid lift.

As noted in other answers, a steam engine can't come close to lifting itself, even if you use highly refined liquid fuel and a closed vapor system to minimize the weight of water -- but if you have a large, slow rotor made like a dirigible envelope (rigid structure enclosing bags of lifting gas), it doesn't have to move very fast to produce a tremendous amount of dynamic lift.

In the end, this would probably be less efficient than a steam powered Zeppelin, and even more vulnerable to weather, but you could handwave it to at least fly.

Not the answer you're looking for? Browse other questions tagged technology alternate-history or ask your own question.

6
What is the earliest time a pulsejet could be built?

3
How would humans adapt if robots take all the high-paying jobs, leaving only low-wage jobs?
3
How exactly would trading information take place if there were two virtually identical worlds that could message each other?
34
How can an advanced civilization forget how to manufacture its technology?
7
Plausible Premise? Reasons to leave a village by young person in post apoc post plague village system world