What would happen if we tried to send the Chernobyl waste into space and the rocket exploded?

In the somewhat near future (50-200 years) the government wants to repopulate the city of Pripyat. To limit radiation, they decide to send the remains of reactor 4 into space (which is possible due to the brand new handwavium engines they use). But due to unexplained reasons, the rocket explodes in the atmosphere.

What are the consequences to earth depending on the altitude it explodes at?

The rocket body is made of a handwavium alloy completely radiation and heat-proof but not neccesarily super strong. When one of the engines explodes, it causes a chain reaction pulverizing the whole rocket, creating a cloud of radioactive dust in the skies.

The result would be [drum roll] not very much.

At present the material remaining in the reactor building ruins has been decaying for 33 years. In another 50 years it will have been decaying fully 80 years.

This is trinity crater, the site of the first atom bomb. I've been there. It was exploded in 1945, so is now just over 80 years old. The radiation is round about double normal background, as measured by a guy wandering around with a Geiger counter. A guy in shorts and sandals. No special radiation protection is required. It's a tourist site with kids and old people wandering around. 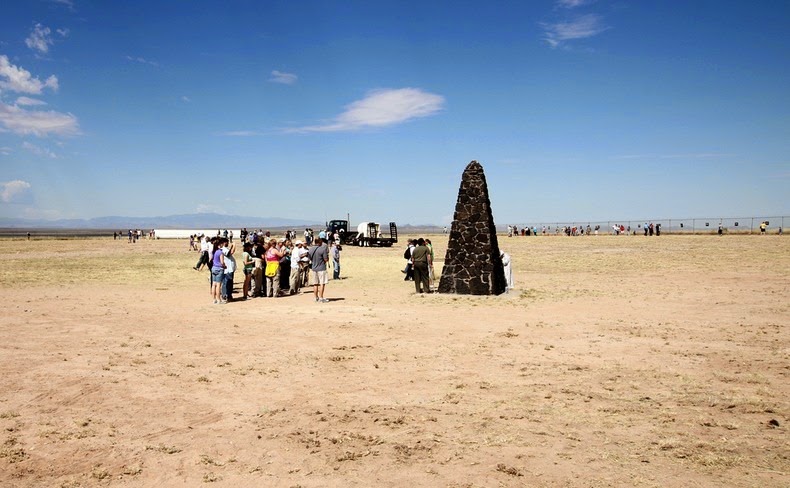 The only real protection needed is to prevent people taking chunks of Trinitite as souvenirs. I bent down, picked up a chunk, looked around at the guy in army gear and carrying a machine gun. And he was looking at me. So I carefully put the chunk back, and he relaxed. 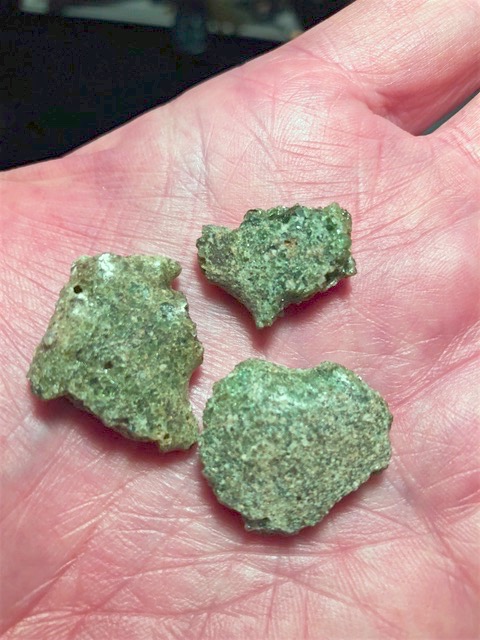 By the time of the beginning of your scenario, the material from Chernobyl will be marginally more radioactive than the Uranium that was mined to produce the fuel. By the end date of your scenario it will be round about the same. If you dumped roughly 100 tonnes of Uranium out of a rocket the result would be much more worrisome from the standpoint of heavy things falling from the sky than it would from radiation.

The real question is, why would anybody bother shooting this stuff into space? The energy costs would be huge, and the benefit is minimal.

Only a small fraction of the Uranium in a nuclear weapon fissions, typically a few percent.

The fission products from a weapon are similar to that in a reactor. There are minor differences in the concentration of different isotopes. The Uranium that does not fission goes through very similar reactions as in a reactor.

The danger of an isotope depends on the half life and the amount, but also the kind of radiation it emits, and how well absorbed it is by living things.

If the half life is very short then the isotope is dangerous but decays quickly, so after several half lives it becomes much less dangerous.

If the half life is very long then it produces very little radioactivity per hour.

The dangerous items are the fission products with intermediate half lives, that are gamma emitters, and that are also absorbed by living things. The big ones are usually Strontium and Cesium. Scroll down this article to Health Concerns.

From the same article comes this graph. 10 thousand days, has already passed, and the total gamma dose is already less than 1% of what it was shortly after the accident. The decay continues, and in another 50 years will be much smaller than that, probably about .01 percent of the first day dose. 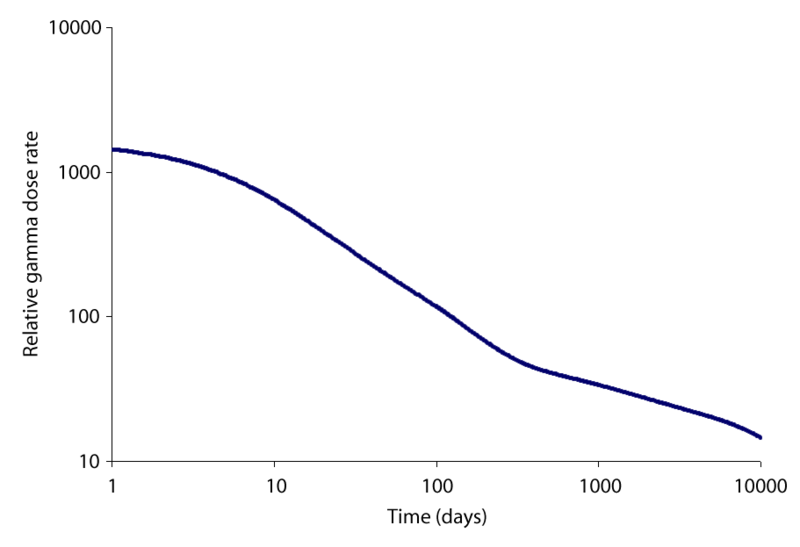 Nothing good at any altitude. Regardless of where it explodes on the way up the act of exploding will reduce large quantities of radioactive debris to fine particles that wind will be capable of moving around. The original blast sent about 15 tons of radioactive debris, 5% of the total fuel at the plant, (about 400 times what the Hiroshima bomb put up) and a small percentage of that debris traveled around the world on the wind. This explosion would do the same, only much more so and that's if it goes off on the launch pad. Europe got it worst last time and probably will again since the prevailing winds are East-West, but everyone will be badly effected, depending how much of the material gets into the air it could kill a large cross-section of all life in the northern hemisphere.

Not the answer you're looking for? Browse other questions tagged rockets radioactivity .

3
With what precision & timing can we send a missile to strike the moon?
17
As we increase the size and mass of a world, at what point does it become impossible for a rocket to achieve an orbit or escape velocity?
2
Will we need to replace conventional rockets to send manned missions further into space?
6
What would a rocket launched from space look like?
1
What would it take to make a fuctioning photon rocket?
12
What kind of hazardous alien waste would tear apart society trying to obtain it?
2
What would be the effects on wildlife of an atomic bomb on a Sahelian or Saharan grassland or desert?
8
Would aliens use the same fuel as us, if not what would they use?