Alastair Reynolds is a contemporary sci-fi writer whose works often demonstrate a strong grip on science as it presently stands. Recently, I picked up his book On The Steel Breeze for a quick re-read of the first few chapters and stumbled across something interesting:

Chiku barely glimpsed the fishermen busy on the deck as the flier sped past, fussing with nets and winches. They never looked up. The aircraft was tidying up after itself, dissipating its own Mach cone so that there was no sonic boom.

(excerpt from Alastair Reynolds' novel On The Steel Breeze, the italicized text my own emphasis.)

Now, for his unique style, Reynolds rarely features concepts such as this unless they've some conceptual basis in actual reality and known science. (Actually, this is not uncommon in sci-fi at all—in most cases, adapting magic-like technologies on theoretical, scientific bases is what literally makes the genre.) So, it had me wondering, Conceptually, what would be required to "dissipate" a supersonic aircraft's Mach cone? Is it at all possible? And if not, why is it so?

I've done some digging and apparently research into quieting sonic booms is quite old, starting way before Concorde property damages. In retrospect, quiet supersonic jets have military applications, so of course, it would've been R&Ded. NASA has had a good go at it, developing this spike apparatus that reduces the decibel value of sonic booms produced by an F-15 by an appreciable percentage.

There are many examples of apparatuses and designs that reduce sonic booms, but not so many that "dissipate" booms, or make them inaudible. That is our purpose: to fly our supersonic flier over the heads of people on the pier without their noticing.

What is a sonic boom anyway? Simply put (simply, because I'm no expert), a sonic boom is the abrupt increase in pressure of a passing shock wave. Shock waves are created when an object moves through a material faster than the speed of sound in that material. How do you dissipate a shock wave? Well, I don't know. It appears (at least to me) that in order to "dissipate" a shockwave, one would need to decompress the air of the surrounding Mach cone, returning it to normal pressure and temperature—presumably in a fashion that doesn't produce another shockwave and Mach cone to tidy up.

However, it is known that one can reduce a shockwave by decreasing its abrupt pressure change using an oblique shock, which is basically just throwing a wedge into the incident fluid stream, compressing it. NASA has also shown that shockwaves can be reduced by employing longer fuselages.

Because the word I've been using—"dissipate"—is somewhat vague, let's use the term qualitatively.

There's no known way to dissipate the shock cone after it's left the vehicle. That's due to the locality of physics... effects happen proximal to the things causing those effects.

However, there is some prior art. Busemann's Biplane is a great example. Basically the design captures the shock wave internally.

Busemann's Biplane is a conceptual airframe design invented by Adolf Busemann which avoids the formation of N-type shock waves and thus does not create a sonic boom. 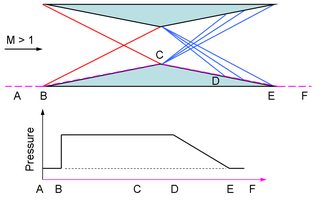 'Course it doesn't generate any lift, but it does show how the idea could work. There's apparently been some looking into using the shape for ammunition (I don't have a link to the paper, sadly). It's interesting not just for its sound dissipation, but also because it has the minimum wave-drag possible, so it can fly farther.

Not the answer you're looking for? Browse other questions tagged science-based reality-check aircraft audio .