There are exactly 2 force laws that can produce stable closed orbits: proportional (spring force) and inverse-square. The inverse square law occurs naturally for monopole central forces in 3 dimensions, while there isn't any space which naturally produces distance-proportional force fields, which is one of the arguments for why 3D space is special.

However, in space of any dimensionality, a sphere of uniform density composed of monopole field sources will produce an effective force which rises proportional to radius in the interior, before falling off on the exterior. That's our spring force law! So, if the sphere is composed of dark matter which doesn't interact other than gravitationally with other stuff passing through it, we can stick a sun and planets in there and get a nice stable solar-system-in-a-ball in any kind of space (well, any space with dimensionality > 1, anyway).

Now, we can get bound, but not necessarily closed, orbits with much less precision. E.g., bound-but-non-closed orbits happen naturally in 2D space, and radially non-uniform spherical distribution of dark matter could produce all sorts of effective force laws which fall off less quickly than $r^{-3}$ (the necessary condition for boundedness). But if we want closed orbits, the density profile of the dark matter sphere has to be absolutely uniform.

So, the question becomes "What properties must a dark matter particle, or particles, have to accumulate into solar-system-scale self-gravitating spheres while maintaining as-close-to-constant-as-possible density in the interior?"

Any state of matter is permissible--solid, liquid, or something more exotic. A perfect solution may not be possible, as perfectly rigid, perfectly incompressible matter is not possible in a relativistic universe, but in that case I am interested in just how good it can get.

For reference, something like "dark neutronium" would not work--the density of neutron star matter can vary over several orders of magnitude between the core and surface regions, and we don't want that much density anyway.

As the sphere is self-gravitating, it must be in hydrostatic equilibrium; that is, there must be a non-zero pressure gradient to balance the force of gravity. For a fluid of uniform density, you can show that this pressure gradient is proportional to radius: $$\frac{dP}{dr}=-\frac{4\pi G}{3}r\implies \frac{dP}{dr}\propto r$$ Therefore, we have a key criterion: the pressure and density of this fluid must be independent. This strongly constrains our possible choices for the equation of state of the dark matter.

At first - and this was my gut reaction - it would seem that it's impossible for dark matter to act like this. Dark matter is typically assumed to be collisionless, and this, coupled with the fact that it doesn't interact via the electromagnetic force, is what causes dark matter halos to remain spherical, rather than flatted out. (Weak force interactions are favored by some models, notably WIMPs, but these effects are not significant.)

Fortunately, theoreticians have cooked up a number of models of self-interacting dark matter (SIDM), where particle-particle interactions are no longer negligible. An interesting effect of SIDM is that it leads to dark matter halos with flat "cores" at the center, as opposed to the more sharply peaked "cusps" present in many collisionless dark matter density profiles. Here's an example of what this looks like: 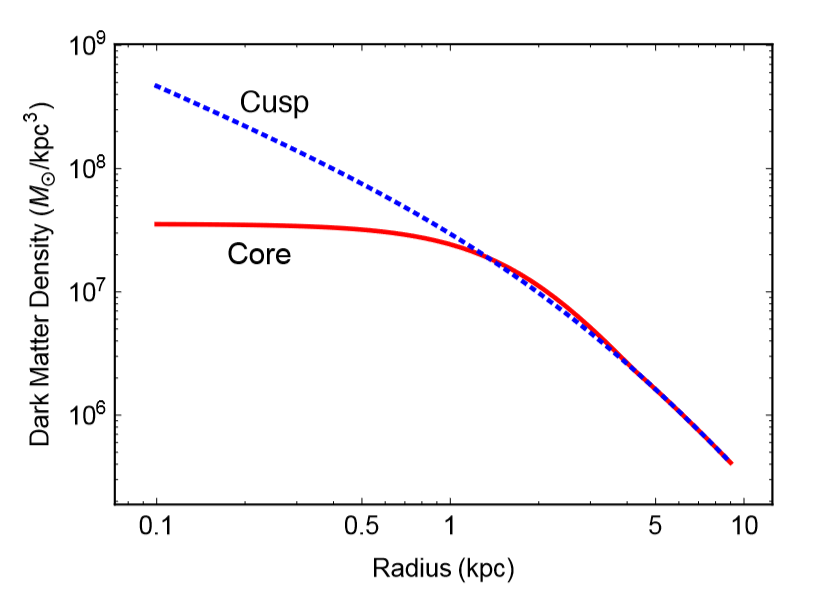 Even within the central kiloparsec, the dark matter density only drops off by a factor of a few in the SIDM model, while it decreases by an order of magnitude in the cuspy model. It seems like the inner region of this sort of halo might satisfy the conditions you're looking for.

Okay, so what sort of properties must self-interacting dark matter have? This depends on the precise model. Tulin & Ho 2017 have a good overview in Section IV. SIDM candidates include:

Most of these models are disfavored in our universe, but of course your universe isn't bound by ours! Self-consistent SIDM models have been developed based on all of these ideas and more, and they could produce the sort of system you're looking for.

Not the answer you're looking for? Browse other questions tagged science-based physics .

3
Is there a mechanism to strongly heat up the Earth from the inside?
1
How can the newly-discovered inter-galactic matter be harvested by inter-galactic mega-generational ships?
6
How feasible is this gravity-altering exotic matter I’ve conceived? Would it have any unforseen consequences?
6
Feasibility of compressing matter to electron degeneracy
12
Delta-v budgets and modified gravity
5
Enlightening Dark Matter?
6
Terminal flux of infinite spaghetti