What attributes and how big would a sea creature(s) need to be to tow a ship?

I'm trying to come up with ways as to how a ship could travel places with a very low number of people (like 4 crewmen). One of the ways I like for how to do this is to have large sea creatures harnessed and used like horses.

How big would a sea creature need to be to be able to tow a cog about 25 meters in length over long distances in an ocean? (Or how many creatures?) Any ideas about possible domestication and feeding are welcome. It is a fantasy world, but I don't want the answer to be some sort of magic.

I think the most important property is a suitable body for the harness connecting the cog to the tug (?) animals, or swim team -- sounds like a bad pun.

The cog will need to be a little extra buoyant in the bow to oppose the downward force generated by the swimming monsters.

The dermis of most aquatic creatures is not going to accommodate a hemp rope looped over their bodies since it would rub and wear too much. And, fish don't have shoulders so it will be a challenge to make a yoke that will efficiently transfer the fishes thrust to the ship.

For those two reasons, I can see giant sea turtles as being draft animals. The yoke could be mounted to their shell without causing them pain or distress. Then, all the yokes could connect to a single tow cable.

If turtles are not attractive, then I could imagine a yoke that conformed to the fishes face, and the fish would swim into it to pull the ship forward. Alternatively, these yokes could be mounted anywhere on the ships hull. The inner surface would be a soft felt that protected the piscine dermis from rubbing -- like moleskin. The body would wriggle and friggle to produce the thrust.

I think as long as the creatures are large enough to overcome the friction between the water and the hull, and the waves and the hull, then they'll be able to accelerate the ship to its best speed.

Another thought, giant remora-like fish attach themselves to bottom of the copper plated hull and move the ships around, except these actually swim rather than try to ride for free.

Now, ideas about domestication and such until a specific species is identified.

If your ride is as smart as you are, you are just a passenger. 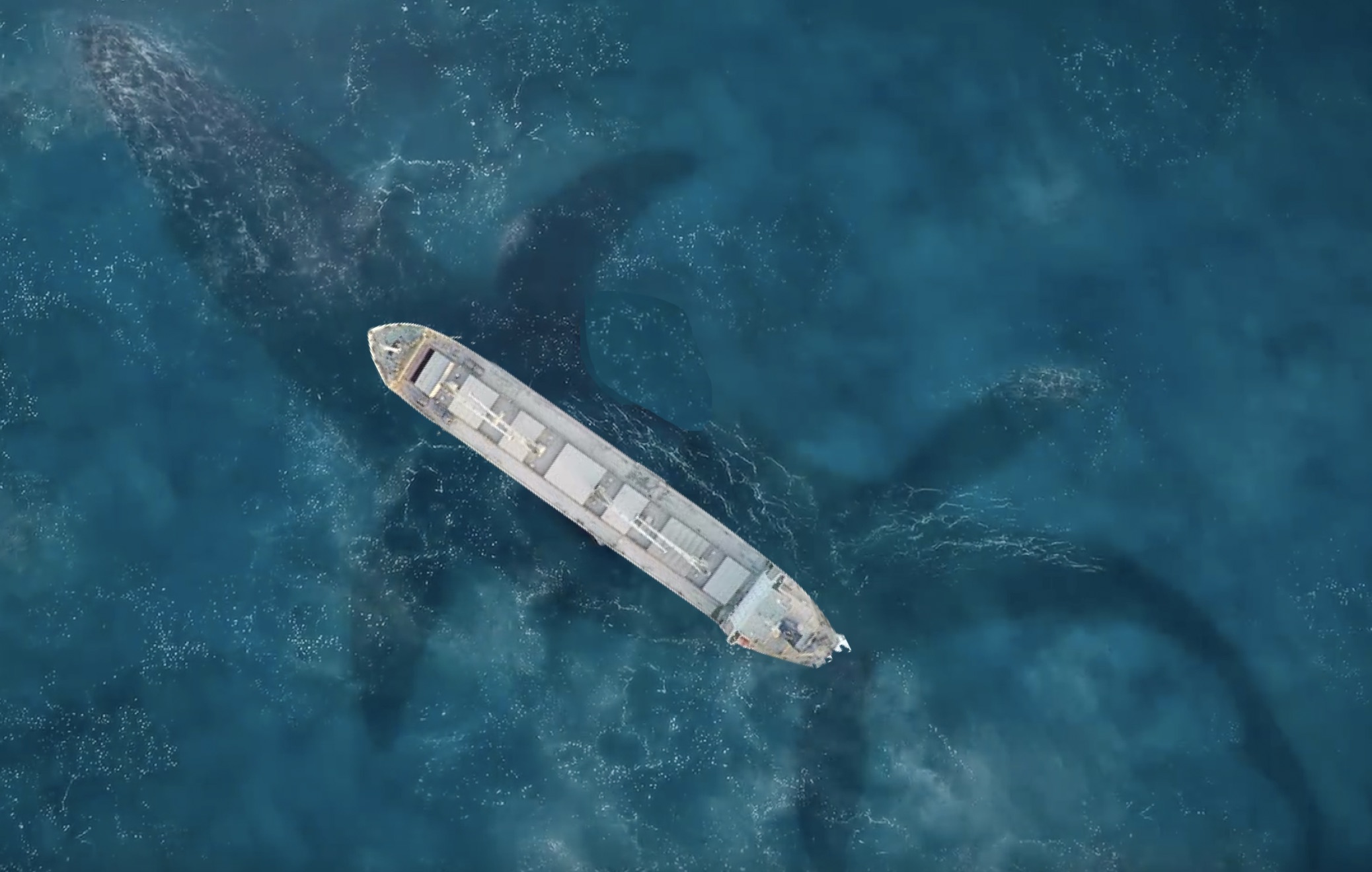 Your crew has nothing to do because their boat has no sails, rudder or oar. It is moved by a giant intelligent mosasaur-like creature. Certain individuals of their kind have an arrangement with onshore humans: they ferry passengers to a destination and in receive get things they need - land meat, and possibly other things as well.

Would your passengers trust themselves to a giant sea predator who speaks to them in a squeaky high voice up through the hull of the boat? And what kind of predator takes this job? A bitter old bull past his prime, maimed in battle, living just to eat? A young female, smarter than the rest, looking to use her smarts to bulk up on land meat? And if they encounter another of her kind at sea, what then?

One problem you'll have with believability in this is that most sea creatures are built for efficiency -- dolphins, swordfish, and barracuda for speed, sharks for energy conservation and feeding efficiency, whales for efficient filter feeding or prodigious deep diving -- not for pulling force.

That said, trained dolphins are on record and film pulling small boats. Generally this is an adult dolphin, 6-8 feet long, pulling a tiny dinghy suitable for 2-3 adults at most, and they don't do it for long and seemingly can't pull it much faster than a human can row. Further, this activity doesn't scale well; the drag of a 25 meter cog is hundreds of times that of a 3-5 meter dinghy (not to mention it's far heavier, so takes more energy to accelerate).

A useful scaling factor is to examine the sail area required for the sizes of the vessels -- a small skiff needs a few square meters; that cog needs a few hundred square meters to get anywhere in a reasonable time. That means it would need the power of a few hundred trained dolphins -- and a pod that size, if free to come and go in order to feed themselves, would eat everything they can catch over a hundred square miles as they passed.

Power may be estimated as proportional to speed x transverse cross-sectional area. Or, given animals of similar proportions, length^2 x speed. And everything else being equal, bigger fish are faster than small fish (for the same hydrodynamic reason bigger ships can travel faster than small ones). So the blue whale seems the best bet. It is fast for a whale, efficiently streamlined, and 100' or so long. There are closely related whales (the rorquals) of assorted smaller sizes, suited for smaller ships.

You would need to have a long towline, for three reasons: to ensure a shallow tow angle (compare horse-hauled barges), to absorb jerking around from wave action, and to minimize drag from the ship being pulled through the whale's wake. The towline would need to be taken in (shortened) presumably with a capstan, and speed reduced for maneuvers such as entering and leaving port. But with a long towline, another problem rears its ugly head: how to drive and control the whale. Unless a magical control of some sort were used, the driver would probably need to accompany the whale, like a mahout, rather than staying on shipboard.

The biggest problem is the feeding. Even if you had two whales working and feeding in shifts, you would be dependent on suitable plankton. This could be leveraged to provide additional plot complications--your ship could only follow routes where good grazing were available.

Now, if your world included real big turtles. . . Turtles feed on jellyfish, which could conceivably be harvested by the ship with trawl nets, and fed to the turtle. IIRC, jellyfish usually come to the surface at night, so the ship would slow down at night and deploy nets as needed. And it is easier to conceive of a mahout on a turtle than on a whale.

39
An underwater creature that could take down a boat
7
The practicalities of riding an antlered stag?
11
Could a deep ocean creature use some kind of bacteria in its body as a way to generate oxygen?
10
How large could my sea serpents be?
33
How would a ship defend against a sea creature, and possibly win?
13
Plausibility of squid whales
3
Could a human sized creature with a skeletal structure similar to a gibbon's be bipedal?
3
Whale-sized electric eel shock?