Can huge planets be seen from tiny planets?

Imagine a habitable, water covered, small earth-like orb in space. Let's call it P. From its surface, you see 2 large glowing masses, different sizes, in the sky, let's call them Bs. They are not stars, they are way way too big.

Could these Bs be giant planets, moon, or otherwise satellites that shine down in the night on their habitable neighbor P? Could P be its own planet orbiting the same star as two visible planets, or would an individual planet, by necessity, be too far away to see the Bs as anything but stars?

It would look something like huge moons in the sky, if what I'm asking is possible.

You are on a habitable moon, looking at your own planet. 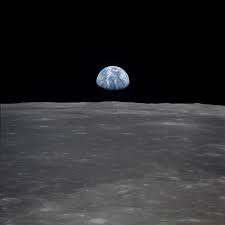 There is no reason a moon cannot be planet sized and habitable. Titan is a moon of Saturn and is bigger than the planet Mercury. The other thing in the sky might be another moon of the same big planet. There are some spectacular images of Jupiter on this site that I was tempted to use: http://www.johnstonsarchive.net/spaceart/art-r.html which are art, not photos and all copyright the artist. But take a look - they show Jupiter and other sister moons. Jupiter is huge!

Truth to say, the name "planet" comes from the Greek word meaning "wanderer".

If you instead want to know if it is possible for a planet to see another planet like an extended body in the sky, and not like a point like source of light, without orbiting it, then it's not possible.

Obviously the planet Earth has a companion object, the Moon, which looks like the Moon in the sky.

Obviously at any one moment the Earth will be as far from the Moon as the Moon is from the Earth.

So in a story set on a moon base on the near side of the Moon the Earth will appear about four times as large in the sky as the Moon appears in the sky of Earth.

And someone could write a story where the Moon has been terraformed to be habitable and have a breathable atmosphere - kept from escaping by a forcefield or something - and people could walk around outside without spacesuits and enjoy the view of Earth.

Of course neither the Earth nor the moon was habitable in that era, so there were no native lifeforms to enjoy the views. But possibly advanced civilizations might discover young planet-moon systems where the two bodies are close together and terraform one or both of the worlds in such a system to make them habitable.

And of course the small planet Mars looks gigantic in the skies of its two moons, Deimos and Phobos, that orbit close to Mars. Deimos and Phobos are very tiny bodies, probably captured asteroids, so from the surface of Mars they look like very small orbs or mere dots of light.

The dwarf planet Pluto and its largest moon Charon are sort of a double planet, being so close together and so similar in size, and each appears very large as seen from the other.

Of course Deimos, Phobos, Mars, Pluto, and Charon are not habitable for any multi celled Earth life forms, though there is speculation that Mars could be terraformed to be habitable.

The four giant planets in our solar system, Jupiter, Saturn, Uranus, and Neptune, all have several times the diameter of the Earth, and all have at least one moon orbiting them at the distance between the Earth and the Moon, or closer, so obviously they all appear to be many times the apparent angular diameter of the Moon as seen from their inner moons.

Of course the surfaces of those moons are now known to be deadly for Earthly lifeforms, as no doubt seemed scientifically very probable even when those stories were being written.

However, scientists have given serious thought to the possibility that giant planets that orbit in the habitable zones of stars could have giant, Earth-like, moons that could be habitable.

And if that giant planet has two or more giant, habitable moons orbiting it, the life forms on each of the habitable moons would not only see the giant planet occupying a large part of their sky, but also see the other large moon (or moons) as sometimes a mere dot of light, and sometimes when closer possibly appearing several times as large as Earth's Moon.

There have been many other questions about possible Earth sized habitable moons of gas giant planets.

I have answered a number of those questions.

What are the day and night fluctuations for a moon orbiting a planet the size of Jupiter?1

The distances between planets in our Solar System are so vast that no planet can be seen as more than a dot of light from another planet. And it might be assumed that all other planetary systems would be similar.

In the Kepler-70 system, the orbits of Kepler-70a and Kepler-70b are so close that:

During closest approach, Kepler-70c would appear 5 times the size of the Moon in Kepler-70b's sky.

The orbits of the TRAPPIST-1 planetary system are very flat and compact. All seven of TRAPPIST-1's planets orbit much closer than Mercury orbits the Sun. Except for b, they orbit farther than the Galilean satellites do around Jupiter,[41] but closer than most of the other moons of Jupiter. The distance between the orbits of b and c is only 1.6 times the distance between the Earth and the Moon. The planets should appear prominently in each other's skies, in some cases appearing several times larger than the Moon appears from Earth.[40] A year on the closest planet passes in only 1.5 Earth days, while the seventh planet's year passes in only 18.8 days.[37][34]

I have just found a discussion of another type of planetary configuration where a large planet and a small planet could sometimes be close enough that each would appear as a disc or orb in the skies of the other planet. At Sean Raymond's PlanetPlanet site, is this post:

Can you see one large planet? Sure, if your viewpoint is from a moon.

Can you see two large planets? Well, probably not. To grossly oversimplify, moons and planets that aren't either very small, or very widely separated, tend to have sufficiently strong gravitational interactions with each other that their orbits are changed, usually with one or more parties being flung out of orbit. Have a read up on Hill spheres for more information on this subject.

You can get a great view of jupiter or saturn from their moons, but most or all of the other moons in those systems look like little points of light. Earth's fellow planets, even the largest ones, are just points of light without the aid of decent telescopes. WillK's link above shows a second moon being visible as a small but non-point-like object; you can probably manage this effect for a single moon, but you won't get anything that looks as big as the parent planet.

It probably isn't even possible to get a Tatooine-style double sunrise... one or more of the suns have to be a long way away (though again, it might be a small but non-point-like blob rather than merely a really bright star).

If the situation you're describing is artificial, you might be able to get away with it. Otherwise, you're almost certainly out of luck.

Not the answer you're looking for? Browse other questions tagged planets moons astrophysics or ask your own question.

5
What are the day and night fluctuations for a moon orbiting a planet the size of Jupiter?

9
Would it be possible for an Earth-like planet to have multiple moons with diverse biomes capable of supporting life?
22
Realistic sky of an Earth-like moon orbiting a gas giant (length of day and size of celestial bodies)
4
Is a star orbiting around planets(not a single planet) possible?
9
Are Trojan Planets Possible? Are Habitable Trojan Planets Possible?
13
Can two stars orbit each other but each have their own planets in stable orbits?
9
Feasibility and consequences: the cosmic dance of twins habitable moons
46
Can a planet be tidally unlocked?
7
How far should second star be in my binary system?
2
How to get a habitable moon without too long day-night cycle?