So based on the question can pumice stone be use as castle material on water? I wanted to take pumice and use it to construct a floating road, so my Lava People can safely travel from one volcanic island to the next.

To make the road, I plan on taking slabs of pumice and joining them together using a sharp needle and the fibers from a heat proof tree (its a bit magical, but I want to string all the pumice together into a long floating bridge).

What sort of dimensions would the pumice slab need to be so that a 100KG person walking across it won't sink into the water or tip over the slab (it is joined to other pumice slabs)?

Let's assume you take a parallelepiped of pumice with vertical dimension h, width a and length c, and put it into water. To which extent will it sink? If we call the sinking s and indicate the density with $\rho$, it's easy to show that

In order to prevent sinking when having a load of 1000 N, you need to have that the additional sinking due to the load shall be less than $h-s$. Or, you need to displace enough water to compensate for the added weight.

Therefore, if you set two among a, c or h, you can determine the other using the above formula.

The tipping moment for a slab can be also calculated and give you other constrains on the dimensions. However, a slab is not the best shape if you want to stay practical: if it is not large enough, it will tip as soon as you approach its edges (try standing on a paddleboard and you will see what happens if you move toward the edges along the shorter dimension).

To improve tipping stability while keeping the dimension reasonable, it would be better to adopt a catamaran-like hull cross section (image adapted from here) 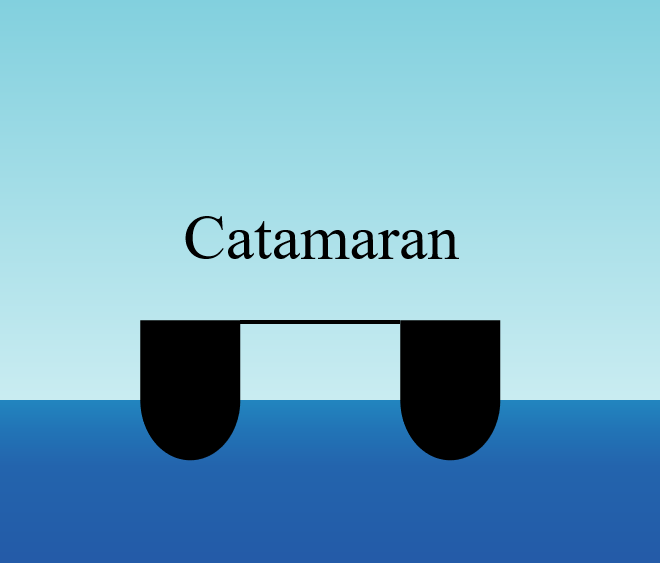 And, since pumice over the years tend to soak in water and then sink, flame the outer surface so that it turns to glassy enamel and is better sealed against water.

Not the answer you're looking for? Browse other questions tagged science-based engineering construction or ask your own question.

6
What would happen to the Moon if it was lowered onto the Earth?
2
Can pumice stone be used as castle material on water?

27
A realistic road network
13
Assaulting a floating city: Two-Stage Ballista solution?
26
How to mine the underside of a floating continent?
13
Smallest possible size for a manned airship
6
Smallest possible Victorian cogwheel size
2
Can pumice stone be used as castle material on water?
5
Maximum Size Limit for a Wooden-and-Bamboo Neo-Ziggurat
10
Using brine as construction material for an ocean floating town