What would the perrrsonalities of cat-people be like? [closed]

I'm looking for ideas as to what sort of perrrsonality traits Cat-People would have. That's people not into cats, but that are half cat. Presuming that on a different planet much like Earth humans evolved from cats and not apes. 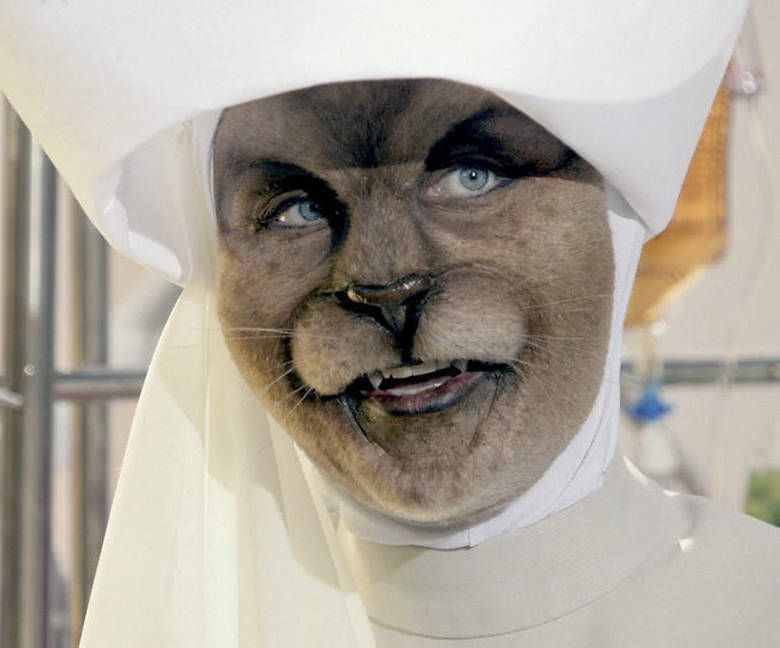 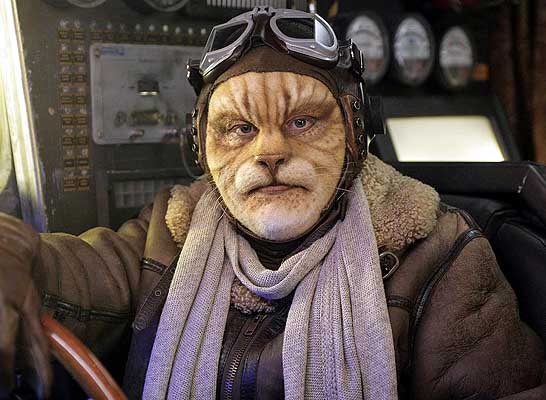 (To clarify, this alien species would have eyes more like that of cats, not human eyes.)

What traits would these cat-people have that could be organized into the 5 Factor model?

Evolution would erase most of the physical differences between humanoid apes and humanoid felines. Assuming they had the same pressures and paths, which obviously we can't assume at all, but this isn't a question about super-intelligent felines.

Cats are more 4 legged than apes (who tend to sit upright and use their hands) but that's something that can change in this scenario without much fuss (it's one of your assumptions anyway).

Apes have prehensile hands/feet for the most part, and some have opposable thumbs. We have these abilities thanks to our common ancestors.

Cats don't. Except... We have polydactyl cats, with extra digits on paws. I've had several cats over the years with this feature. It seems to make no difference on rear feet, but on front paws, it can make them more dexterous. 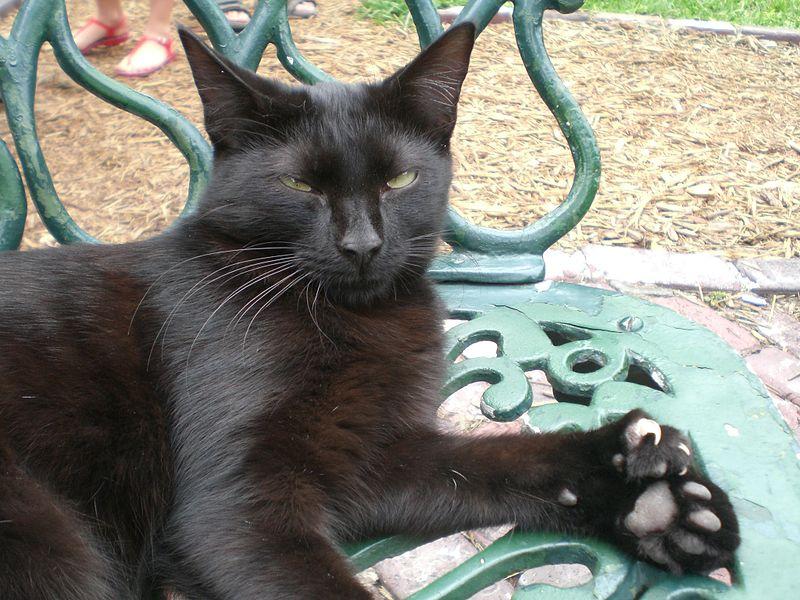 Some polydactyl cats present "mitten paws," which occurs when the extra toes are attached on the medial side, or "thumb" side of the paw. This can lead to a cat that appears to have opposable thumbs. Some cats have learned to manipulate the extra digits like a human thumb. Cats have been known to use this ability to pull stunts that amaze their owners, such as opening latches and windows. (ref)

I see no reason why, given adequate pressure to do so, cats would not develop prehensile hands with opposable thumbs.

All this to say that, if evolution can lead to such dramatic physical changes, and if it can create the same basic outcome in very different biological orders, then what would it do to personality? Personality comes in part from genetics but mostly is a function of environment, culture, and other current-day features.

Adult cats brought inside after living their entire lives as feral (outdoor cats, born "in the wild," with little to no interaction with humans) have personalities vastly different from cats raised by humans from birth, with a mother that was the same.

Your question has fun and pop-culture elements to it, but you also tagged it science-based, which tells me you care about the reality of the situation, not just the silliness.

But okay, let's assume that the modern day Earth cat personality persists in an alien species that is a humanoid evolved from cats (which is not the same thing as "half cat" as you also state).

In a humanoid feline society, animals would be raised as food, treated as "lessor beings," and there would be harsh social penalties for felines that transgressed beyond having a pet and who did things like advocate for non-feline rights.

Does this sound like human society? Yes, it is similar, only it would be a lot stricter. Why? Because humans are omnivores and normally don't eat meat every day and can even do just fine without any meat at all ever. But felines are obligate carnivores and must eat meat as their primary source of nutrition. In addition, cats are required to eat regularly. Even a couple days without food runs the risk of developing fatty liver disease and this can be fatal in cats.

We already have the modern cat personality of feeling superior to others and treating other beings as present for the cat's well-being. With a humanoid cat, this would be intensified. A mouse isn't just a potential meal, as it is with a modern day cat. A mouse is part of a species whose purpose is to maintain the health and satisfaction of the cat species and the survival of the cat species depends on social constructions of mousehood as inferior in every possible way with no exceptions. Some modern cats befriend mice or choose not to eat them. A humanoid cat would turn in a rouge mouse (and its cat friend).

With rules in place, strict social separation of felines from lessor beings (especially food sources), and a strong food supply, the felines would feel secure. The factor of "Neuroticism (sensitive/nervous vs. secure/confident)" would kick in though if anything went wrong here, or even if it had the appearance of being wrong.

"Openness to experience (inventive/curious vs. consistent/cautious)." This factor would be present only when the feline was emotionally secure. While this is true of most species, including humans, felines have more need for structure and a society of laws and rules. They would be very curious but not open to change. "Conscientiousness (efficient/organized vs. easy-going/careless)" fits in here as well. Cats would be well-organized, and carelessness would not be socially acceptable.

"Extraversion (outgoing/energetic vs. solitary/reserved)" would not be a factor. Humans, modern cats, and humanoid cats are would all be a mix. There's a range here and I see no reason why being feline changes it. "Agreeableness (friendly/compassionate vs. challenging/detached)" is connected to this and would be a mix, though with more caution about being too compassionate.

Whatever you want for your story.

my name is Predator. You look like a prey. Prepare to die. Predators are designed to be physically repulsive but they represent typical cat behaviours:

You would have hard time putting cat personality into those linked 5 factor model. It's state (inventive/curious vs. consistent/cautious). When the cat is exactly curious while being cautious. In cat those feats are not "vs." but are trait on itself.

Let's see. I'll call them humancats, if you allow.

Openness to experience: I imagine humancats would be on the curious side. Cats are very playful and curious, and so are humans. We have that in common.

Conscientiousness: Cats tend to be very clean and tidy, and this trait would likely be encouraged among humancats too. However, they're very independent and living in a highly hierarchical society probably wouldn't work. Humancats would likely live alone or in very small groups and their society would lean towards some rural egalitarian thing rather than some strong dictatorship. Cats are notoriously difficult to train and order around, despite being very intelligent. So, conscientiousness would work on a personal level, but not on a level of a whole nation/country/culture.

Extraversion: absolutely not. Cats are very introverted. They like napping and being alone. Cats are mostly solitary (although lions live in prides) and don't even like each other's company that much. Domestic cats are (usually) very cautious of strangers and would rather run away than interact. They're also territorial towards each other more than other animals (unlike dogs, that are very friendly to each other but very territorial to other animals). Now, considering that humans are much more social, this trait may be less pronounced.

Agreeableness: maybe. Being introverted and reclusive, cats may not be that agreeable. However, they can get very affectionate with people and animals they spent a long time or grew up with, and the human half (which is very social and agreeable) may affect the humancats' behaviour. Cats that grew up together may end up being agreeable and team like, but only with each other.

Neuroticism: I don't think so. Humans can be this and that, but cats largely seem calm and quiet. I don't think humancats would be too neurotic.

Some other things is that humancats would likely be very promiscuous for human standards. Domestic cats can have several kittens, all of whom have different fathers, and they raise them alone in secret (because tomcats often try murdering the kittens). Humans are very monogamous and being a single mom with several baby daddies who are very violent towards each other's kids (yes, they kill each other's kittens, not their own) is....uncommon for us. I think humans would be very critical of this behaviour of humancats.

Being half human too, their cat side will be limited too. Humancats likely won't need to hunt to eat, so their predatory side would be repressed. It's likely they won't be such nightowls either.

Not the answer you're looking for? Browse other questions tagged science-based evolution aliens xenobiology or ask your own question.

16
In obligate carnivores, can I have animal husbandry (livestock-keeping) without farming ever developing?

10
What would the eyes of a cave-dwelling race be like?
3
How does an Alien world have Earthlike creatures?
8
Genetically modified timber wolves with Siamese cat coloring?
3
On what conditions would a four-eyed creature evolve to have six eyes?
3
How do I explain the compound eyes of my creatures?
8
Could a Nautilus Shell, Squid Gladius, or similar structure eventually form the basis of a Spinal column/Skeletal system?
5
Alien Mammal-Like Ears
5
What happens when a person with some edited genetics (like say, eagle eyes) reproduces with a person with regular genetics?
3
Could a humanoid alien species evolve to have a natural melanin deficiency but still have colourful skin/skin markings?