What effect would living underwater have on a mermaid's skin?

What properties (color, texture, etc) would their mammal skin likely evolve to have while living under deep water?

Assuming you're asking about human skin, not a fictional blubber.

It depends on the depth at which they live

Melanin (a brown pigment found in human skin) is a natural form of sunscreen, it is also the only colouring in human skin (pinker skin comes from oxygenated blood near the surface of the skin).

The graph below shows the absorption of different frequencies of the electromagnetic spectrum. Melanin aims to block UV (the left most section) where we can see that, per meter of depth, water absorbs a lot of this. 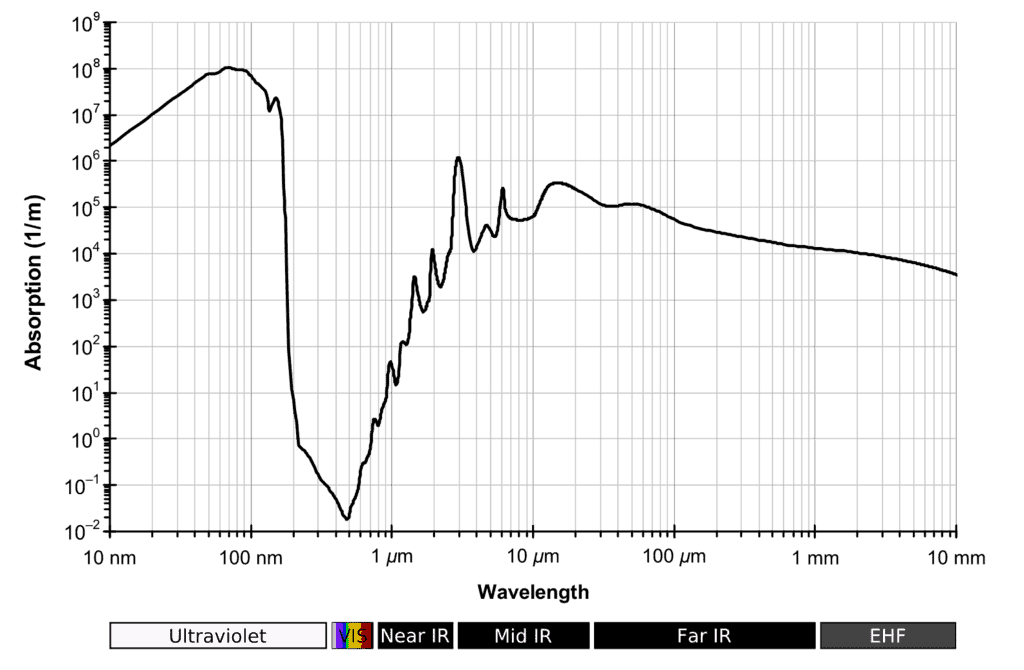 So, just as different skin colours naturally developed depending on sun exposure on the surface it would also depend on what depth the mermaids lived (much less exposure the deeper you go as seen by the graph above). If the mermaids regularly swim above the waves, however, they may well need more melanin to combat not just the sun from above but also that reflected from the surface around them.

So if the mermaid needs to surface regularly they would have darker skin, if they live below the surface they would likely be pale skinned.

The answer would be different if you want your mermaids to have blubber other adaptations but, given the question is about the little mermaid, my answer focuses on human skin.

You say they live in deep water? Well, A) there's only so much I can do if I don't know the depth since it depends on depth, and B) it's likely mermaids will look a lot different than they are commonly depicted.

That being said, even with my little understanding of biology, I can make some guesses. As Lio said, your mermaid's upper bodies will be pale. The skin there will likely be smooth and rubbery, like a dolphin's, and be just as thick-15 to 20 times thicker than a regular human's, with a third layer of modified skin serving as blubber.

So while these mermaids will be streamlined, as they need to be hydrodynamic, don't expect them to be skinny-bitty! But what about the color of their scales? It turns out, deep-sea life follows a strict color pattern:

Considering mermaids would have evolved to live in the sea, they would likely follow this pattern. That being said, there are plenty of colorful fish in Levels 1 and 2 that don't, so who knows? They might look like mandarin fish!

39
Is it more likely that merfolk would evolve with horizontal or vertical tails?
56
What would the fortifications of an underwater city look like?
52
Why would an underwater creature remain lodged to its prey?
11
Mermaids on Land?
15
Mermaid Buoyancy: Oily Livers, Swim Bladders and Lungs
53
What would an out-of-water submarine (for water-breathing mer-people) look like?
64
What would a medieval war against an aquatic race look like?
11
What would a vegetarian mermaid eat?
11
Would nomadic mermaids be capable of domesticating fish that they herd?
2
Feasible Benefits of Synapsid Lineage for Turbovores