Assume a civilisation with futuristically advanced knowledge of biochemistry. Assume it wants to develop a cybernetic device meant to facilitate the organism's ability to perform high-power activities (anaerobic or borderline anaerobic) for longer than normal.

ATP is kind of already synthesized by battery power. In fact, ATP synthase is occasionally referred to by biochemists as 'the world's smallest motor', and is powered by positive H+ ions moving across a concentration gradient. Picture below, essentially the purple ring rotates as H+ moves past it and forms ATP in the green umbrella. 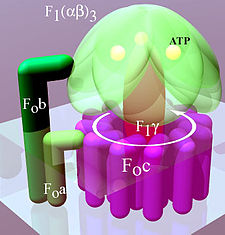 Your idea, if I'm understanding correctly, is to create a store of ATP artificially, and then send it to the target cell(s). This runs into problems, because of all the ATP you're now dumping into the cell. The ATP cycle is tightly regulated by internal feedback. A large shock dump may trigger the gluconeogenesis cycle. Then it's a question of raw energy. One mole of ATP gives ~7.3 kcal, which sure, sounds great. Except one mole of glucose produces 2 moles of ATP during glycolysis, (produce in the sense of recycling) which is anaerobic respiration. And ATP has nearly three times the mass of glucose. So you might be better off just injecting raw sugar. (That was a joke, don't do that. Reason will be explained later.)

That did give me an idea, though. Accelerating aerobic respiration. If you use implanted mechanical means, you can simulate the Electron Transport System and overloading the H+ ions in the matrix, then you can speed up ATP synthesis, which functions on a concentration gradient of H+ ions, which would require quite a bit of energy. This also has two added benefits - one, it requires no oxygen, as oxygen is the final stage of the ETS and you are skipping it via mechanical means. Also, since you've decided to get all your ATP like this, hopefully your body will decide not to speed up glycolysis. And that leads to the second benefit - no lactic acid buildup.

This is the real kicker. When it comes to brief energy, there's a cost. In red muscle cells, they aren't equipped to handle all that pyruvic acid which comes from non stop glycolysis. So it gets turned to lactic acid. (Except in really rare case where it gets turned to alcohol.) And that stuff is nasty. Earlier I attributed it to muscle fatigue, which is false, (thanks to Demigan for pointing that out) but what it does do is give you lactic acidosis, as acid builds up. The muscles get more acidic and that makes the enzymes stop working and stopping your muscles from working well. It's also hard to whisk to away. So let's discuss you're second idea - ATP cassette analogues. Why don't you use that in reverse - instead of spending energy to put energy in, spend the energy to drain the lactic acid faster than normal diffusion can.

There is a problem with this all, namely, I have no idea how these devices will work. I know far more about biology than I do about robotics. So I know that these tricks - speeding up the ETS and draining lactic acid will really help for anaerobic respiration. I also can tell you the rough forms needed for the biological equivalent. But once these nanites run out of power, it's over and I've no idea how you'd go about recharging them, save for just swapping them out and replenish it with new ones. (Honestly, swapping them out is a waste of energy, just have them detach when they run dry and let the body's waste system handle them.)

There are 4 cytochromes within the Electron Transport Stystem (I, II, III, and IV) that act as membrance proteins. Also Cyctochrome c, which acts as a messenger between them. What happens within them is that electrons gets dumped at the far end (I and II, depending on whether NADH or FADH2 is dumping), which is ferried along until that H+ eventually is drawn out by oxygen and forms H2O. This is why you inhale oxygen and exhale water vapor. The movement of electrons in turn allows for free H+ ions to cross the membrane. An analogue system would have a lot (and I mean a lot) of electrons, in storage. When activated, it'd release those along it's own chain built into the membrane and ending at it's own far side which, of course, is less negative than that end. When it reaches there, that would allow for transportation of H+ against the gradient. When it finishes, it detaches and no longer interferes and a fresh nano-ETS-analogue slots into place. Rinse. Repeat.

If you have sufficient knowledge then of course! It would likely not be a device but rather a bunch of cells integrated into your body to create ATP.

But it might be simpler, "simple" being relative here. Currently when our cells are working anaerobically they will dump the lactate and other waste into the bloodstream. This will then move through the body and be processed by the liver into usable energy that will be transported back to the muscles again. But due to the random nature and long process of being pumped around the body until it reaches the liver it can take a while. So instead of one liver, add a series of liver cells downstream muscles. These liver cells transform the lactate and waste which is then transported by a local lymphatic system specific for them to dump the product upstream so it immediately flows back to the muscles that originally created it.

Not the answer you're looking for? Browse other questions tagged reality-check biology hard-science biochemistry cybernetics .

11
Plausibility Check: Territorial Trees?
9
What could be used as an alternative to ATP in boron based biochemistry?
7
How can a person become completely mute without external indications?
2
What are possible energy carriers besides ATP?
1
Plausibility of plastic bones
7
External parasitism : Authority