How would a character build an explosive from natural elements?

A character is on an alien planet that is very much like any one of our large deserts. Sort of a Tatooine like on Star Wars.

He needs to cause a diversion. There aren't any explosives on planet of any sort. It's a farming community. There are no ships present at the time where pieces of it might be used.

But he needs an explosion of some sort. It doesn't have to be huge, but it has to be startling and cause a dustup.

What sorts of materials could use from nature to build such a bomb? There are farms here, so maybe there is some sort of fertilizer available as a non-natural element as well.

Make a flashbang out of gunpowder.

I'm stealing Trevor's comment above since I think that's a excellent answer. Gunpowder is actually VERY simple to make and, since for your purpose you just need a flash and a bang, a lot of the complexity required to actually propel a projectile to lethal velocity is bypassed.

Many of us learned about this by watching an episode of Star Trek where Kirk is forced into a primitive survival duel with a giant alligator-looking dude and wins by making a cannon out of materials he finds lying around.

As a side note, Mythbusters tested this and proved that Kirk could indeed have made a cannon this way.

Gunpowder only requires three materials that are pretty easy to acquire as long as you're in the right places. You can read this article for the full details, but the TLDR is that you can get Charcoal out of any wood fire, Sulfur out of volcanic or geologically active areas (e.g. Yellowstone has lots), and Saltpeter from bat guano. There's lots of places in the United States alone where you can easily find all three within walking distance.

Foreword: don't try this at home.

You just need water, a sealable container and a fire.

An explosion that occurs by accident might be the best kind.

From the late Roman period, at least, until modern times, open flames were prohibited in flour mills (more recently also in grain elevators) because flammable dust in the air can form an explosive mixture.

Many years ago, there were "science magic" articles published for kids. One of the demonstrations was to set up a metal can with tight lid with a funnel filled with baking flour and a hose running into the funnel. Set a lit candle in the can, put the lid on, and (fairly quickly, before the candle burns up all the oxygen in the can) blow through the hose. The flour dust would ignite with a loud bang and blow the lid off the can with considerable force.

This isn't considered safe for kids any more, but the principle hasn't changed. Get any kind of flammable dust (flour, wood dust, coal dust) into the air in the presence of open flame, and don't be there...

Technically a bomb is any high pressure expansion. The most common type is created by combustion.

Rupturing a pressurized fuel source and providing ignition at the same time is your typical trope. The typical trope is to shoot the gas tank, but we all know that doesn't work by itself without an ignition source.

The same technique of explosive ignition is also the standard method of amplifying a tiny intense explosion into a huge show-worthy distracting fireball. Using a small amount of stable explosives and a tank full of gasoline, Kerosene, or Diesel (depending on the desired explosion effect) is the standard method to make a Hollywood explosion.

Conventional old style explosives are made from carbon, sulfur, phosphorus, nitrogen and oxygen. Charcoal and Sulfur-Nitrate (in the form of Sulfur Ore) are the primary source of old-style handmade Black Powder.

Plant Cellulose combined with a straight Nitrates with a balance of Phosphorus and Sulfur as stabilizing agents is used for Smokeless Gunpowder. Ironically what is now used as smokeless gunpowder was initially found in old 1920s film. Hence why old is so dangerously explosive.

However, any element that reacts with oxygen can be made explosive, and nitrogen has several compounds (Nitrate and Nitros compounds) that ocure in both minerals and organic matter that make this easy.

A small amount of two metal oxides, typically iron oxide and aluminum oxide, either heated to a very high temperature, or mixed with several other compounds that I recommend you just vaguely call "several other compounds" because how dangerous this stuff is, can be used to create thermite, which is a slow burning but insanely hot compound. This could also be used as a distraction, particularly when destroying something.

Furthermore, any compressed gas chamber is also subject to a form of explosion of sudden release. For instance a shooting a bottle of hair spray has been used to create a small explosion in many a movie. Although most bottles have better safety design now to prevent such an explosion, we can give artistic liberty that such safety considerations go out the window in your typical sci-fi dystopia. In fact, it would be artistic liberty to say companies wouldn't cheap out on safety in a sci-fi dystopia.

Seriously, I thought this was all common knowledge.

You don't need to make a bomb at all. Lump sugar and clean ash will produce the means for a startling amount of white smoke. Does this distraction need to be a capital-E Explosion? 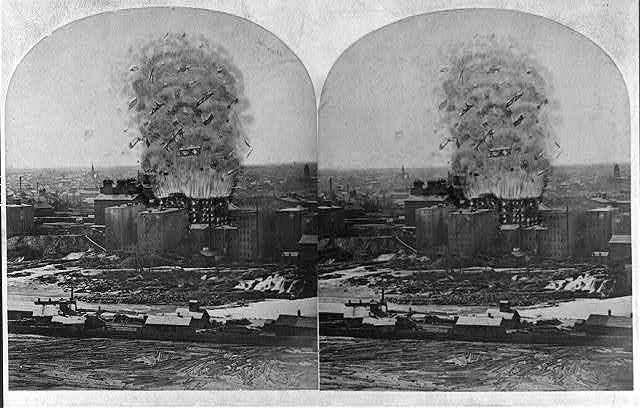 Flammable dust of any kind has the potential to create an explosion. The fine mixture allows easy access by air and the heat and gas produced by rapid combustion can blow things up. On a small scale you can see this with non dairy creamer. On larger scales Youtube will entertain you for a long time with experiments such as this. The linked Wikipedia article describes explosions from coal dust, flour, sugar, or any flammable particulate matter.

On your desert planet maybe there is a coal mine, or maybe a flour mill. Either could produce fine explosive dust. Your character might be aware of an explosion of this sort that has happened in the past. He circumvents safeguards put in place to prevent another one, and another one is exactly what happens.

ANFO is a common explosive made from fertilizer (ammonium nitrate) and fuel oil. For our purposes, fuel oil might be any of diesel, kerosene, jet fuel, or the oil that burns in old furnaces. Steal some fertilizer (make sure it's the right kind) from a farm and some diesel for the tractor or the pickup truck.

If you look down under "Malicious Uses" in the link, you can see examples of when ANFO has been used as you describe. For example, the Oklahoma City bombing. That's why ammonium nitrate is a restricted substance in the United States (and many other countries).

Add sacks of flour around your explosive device and you have the makings of a large distraction. Perhaps even a second device to make sure that the flour ignites.

Not the answer you're looking for? Browse other questions tagged science-based science-fiction physics explosions or ask your own question.

5
Ideas for how aliens would approach this fight?
24
How realistic are explosive collars?
5
Unplanned Colony: what industrial level could be recreated in the short-term?
4
What are possible catastrophes on a space station?
6
Maximum size of a pre-industrial city without domesticated fauna
1
Destruction of modern suburbia by railgun
42
How to trigger explosive arrows?
21
Metal that glows when near pieces of itself
1
Drawbacks of my Catastrophe Inhibitor