If you see this type of road and you are Czech, you are going to say, that is made from cats heads:

Imagine I am Joe the Average, who was sent to medieval Europe (by accident)

Not only I managed to survive, but also I managed to gather group of people to help me survive. These people believe that I am black mage possessing infinite magic powers (thanks to lighter forgotten in my pocket)

I would like to support this kind of thinking also in other medieval people. And because I did read far too many bad fantasy novels, there is idea in my head: What if I built myself bone castle from actual bones? And what if the road to such castle would be made from actual skulls?

This question has one big handwave and assumption: Everyone is willing and wanting to help me. I know that it would not happen for real, but please accept this assumption and focus only on one aspect of the whole story: Building material.

Given the premise that everyone is willing to help me - am I able to pull it off? Will such "castle" be livable?

You say it wouldn't happen for real, so I'm guessing you are not familiar with the amazing Sedlec Ossuary, which is decorated entirely with human bones. Turns out in the middle ages, life was so cheap they didn't know what to do with all their human bones anymore. (Most of the bones used here are from plague and war victims.)

So it might not be as intimidating to medieval people as you think it will be. 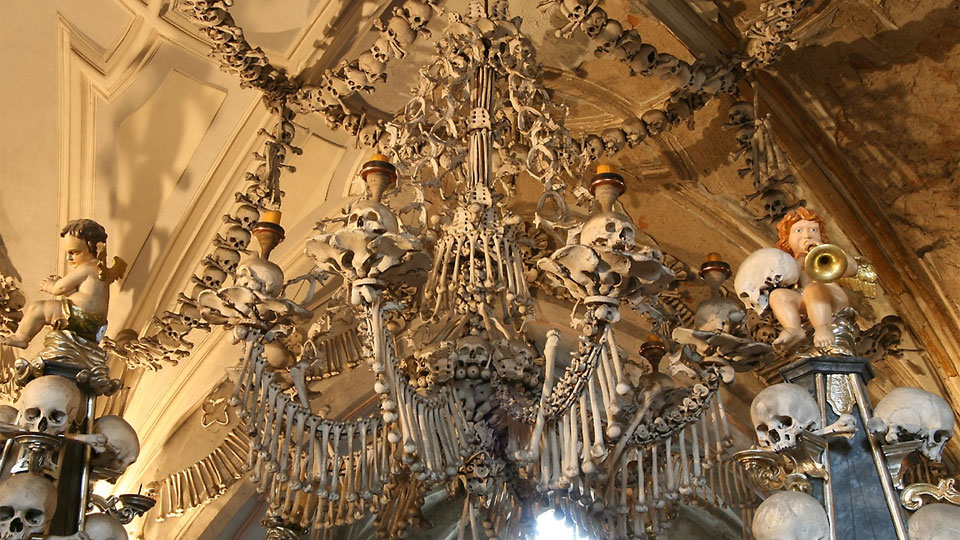 That said; making the outside of your building from bones is a terrible idea. Bones are brittle, and they suffer from decay. Such a building would not be able to reach any kind of height before the bones would start collapsing under its own pressure. Besides, it would not keep the bone shape anyway if you want to make closed walls, and you do because otherwise the wind will cut straight through it.

Your best bet is to use the bones for decoration, but even then, the actual people of the middle ages have you beat because they already do that if they have the bones to spare.

Your road would be fairly easy, you can use most any thing as aggregate or cobblestone, worst case scenario the skulls eventually break up and form a looser gravel road...

Structures on the other hand will be more difficult, bone has pretty good compressive strength, but poor shear strength; a good deal of both is lost when the bone is no longer living.

It looks like building primitive structures with bone has been done though: 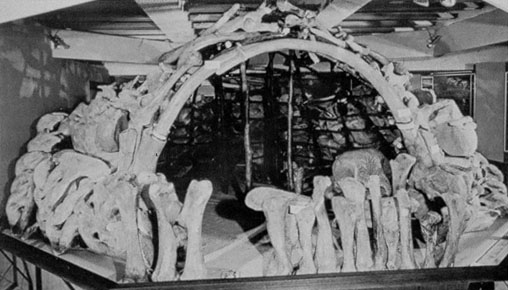 It looks like the main problem you'll likely run into is weather proofing. Most primitive bone structures would have been covered in hides and furs to keep them warm and dry. But that would make your elaborate bone structure look like any other medieval tent and thus would defeat the purpose.

If you're open to incorporating other building materials you could, more or less, use bone as a building block and mortar them together, but your structure would end up being mostly mortar.

Erik mentioned that medieval people were already using human bone for decorative purposes, so I doubt that a structure made from animal bone would have the intended effect. You would likely be seen as primitive rather than scary.

If I really wanted to scare medieval locals, I would tap their fears of witchcraft and damnation with modern body modification. Extreme piercing, tattooing, and suspension would go a long way to ensuring that you were feared and viewed as a "black mage".

Eskimos used whale bones for Construction purposes. Both for making homes (the supports) and their kayaks, a large reason of course is because they don't have other building material handy, (meaning trees). At least in the places they are using these materials.

Build the structure form Adobe and then seal the bones into to the stucco on the outside of the walls for a suitable sepulchral effect. Otherwise, bone breaks down too fast to be helpful.

Now for something super scary, my favorite technique this week, Catalan vaulting, can be used to create a Skull shaped structure that would be very strong and enduring. It doesn't have to follow the same rules as a traditional vaulted structure. It can also follow a free form shape.

You could build a castle with a building shaped like a skull, as in John Dixon Car's mystery novel Castle Skull.

The gateways to your castle could be sculpted to look like the mouths of monsters and you could have the gatewway to Hell inscription of Dante's Inferno inscribed: "Abandon all hope, ye who enter here".

94
What could an average modern human achieve in medieval times?
7
What would a village built out of human remains look like?

2
Could a historic society live on another world?
8
What would be the impact on a medieval society if "cure disease" magic was available to the powerful?
13
Is Game of Thrones realistic: food supplies during extended winters in medieval England
1
How to breed war elephants?
1
Transit time of varying mediums of sending messages
22
How do you build an underground city that "cuts through" a mountain range?
4
How long and how much money would it take to rebuild a war torn domain/city in a late Medieval esque society (+ levitation magic)?
8
I want to strengthen bones with some kind of material. Where exactly does this material go?
31
How long will it take for a medieval human to adapt to our current world?