Injury to the lower jaw - what would be the consequences?

One of my characters suffers an injury where a spike pierced his lower jaw and severed his tongue. Ignoring the fact that he may not have survived this wound under normal circumstances (eldritch powers are a useful boon at times), what would be the consequences of having such an injury?

Some more information: the character is an adult male living in mid-1920's Boston. He is to be classed as a normal human for the purposes of living with this injury. In specifics, the spike punctured through his jaw, behind the chin and sunk into the upper part of his mouth, severing the tendons connecting his tongue on the way. Money not a large issue for the people taking care of him.

The main question I have is what would living with this injury be like on a physical day-to-day basis and what hindrances might occur from the time period in question?

Bonus points for answers including

So Sorry: No Terrible Consequences to Speak Of

Phineas Gage was a 19th century workman famous for having survived an injury far worse that the one you're describing. On the right image, you can see that a heavy rod violently ascended through his left cheek, above his molars, burst through his left eye socket and proceeded to pass through his brain before exiting the right side of his skull. The left image is of Mr Gage afterwards. Still a rakish rogue, with his missing eye and famous rod in hand! His injuries were almost all cognitive and behavioural. 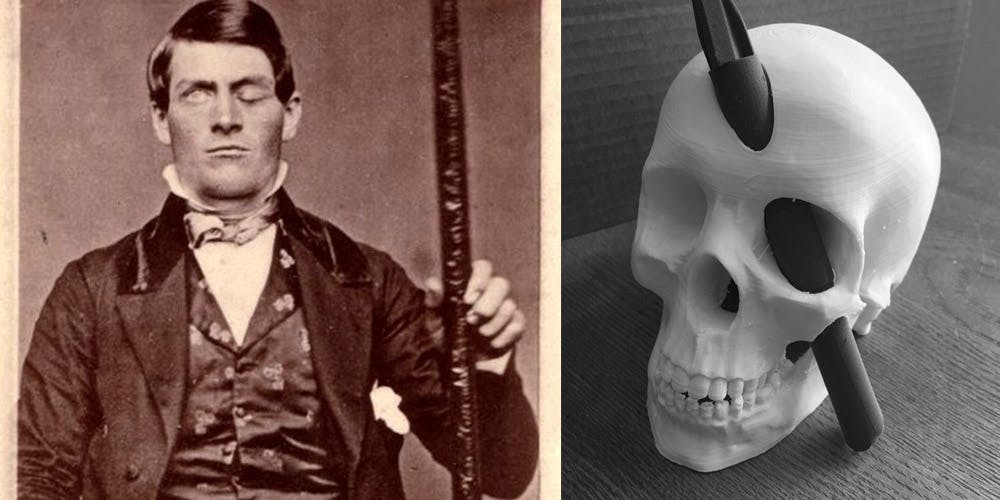 You're describing a much less damaging injury, where a spike pierces the floor of the mouth, pierces or more likely violently pushes the tongue aside and lodges in his hard palate. Being from 1920s Boston, your character, especially since he's a policeman is undoubtedly Irish and probably got into into a bit of a tussle with some other, even drunker, Irishman, perhaps leaving him stabbed by a sailor with a marlinspike in his pocket. Very handy, your basic marlinspike!

A spike is essentially a longish, tapered tool with a round cross-section. The end may be sharp or blunt. This is ideal. 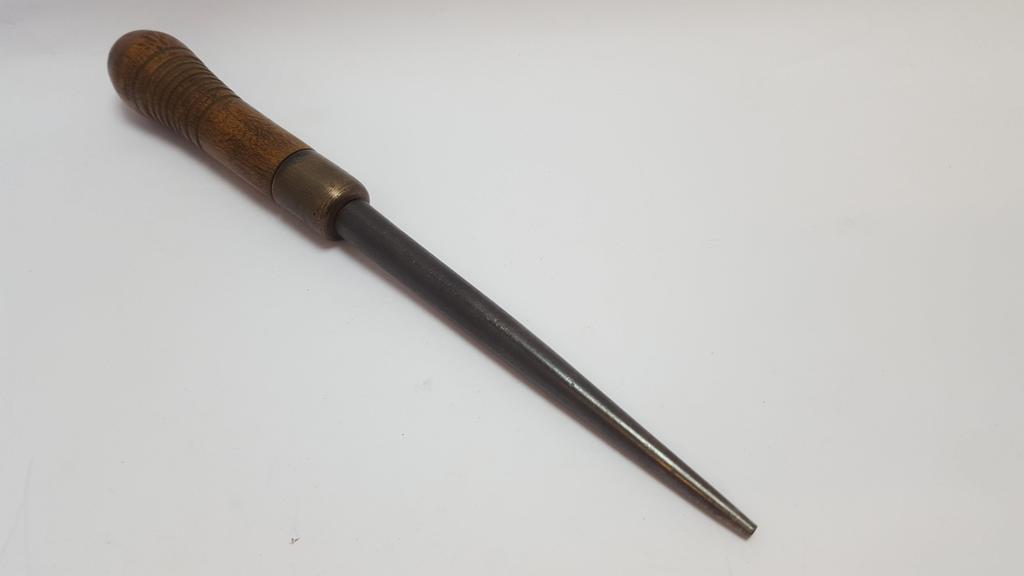 The likely extent of your character's injuries will be as follows: 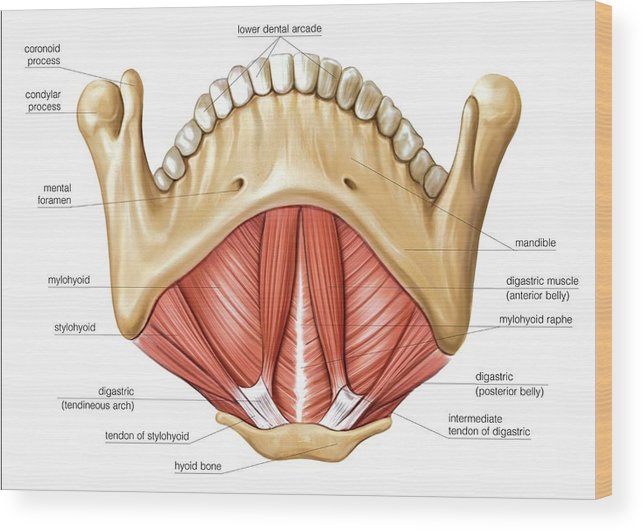 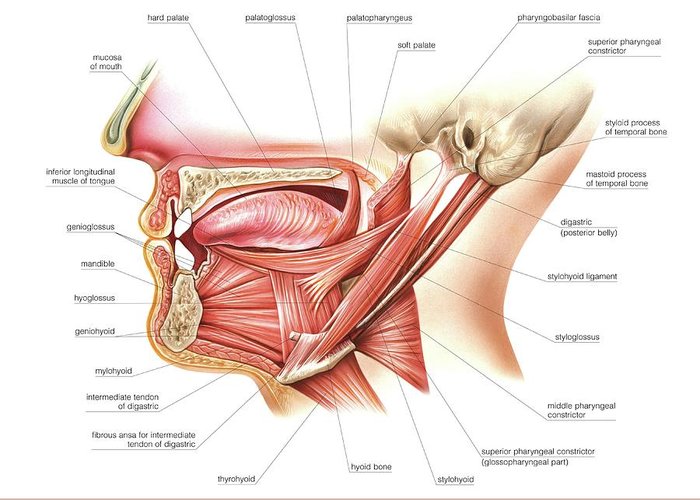 Even in the 1920s, this injury would be a cinch for a good, Army trained surgeon to take care of!

Inspect and explore the nasal cavity; tamp down any dislodged bone; suture or cauterise the mucosa.

Same with the tongue. Explore the wound, clean it out, suture the top, suture the middle if needed and then the bottom.

Same with the floor of the mouth. Explore the wound, clean it out. The salivary duct injury repair was by this time more than a century old, so no real worries there. Tack together torn soft tissues.

Coming down to the structural muscles, explore, irrigate, repair.

Consequences: The tongue can take quite a beating. People pierce them. People slit them. People bite them. Early in recovery, of course his mouth and jaw will will be very sore. Eating and drinking may be difficult, so he may have to be fed. If his nurse is cute, he'll be happy to be fed! Happily, his caretakers will almost certainly have an invalid feeder in the kitchen. These are designed to help feed people liquid diets when they're sick. 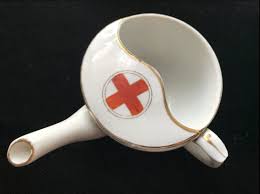 Once the wounds heal, your character will be able to talk as well as he could before the injury.

Men came back from the trenches with real facial injuries. Your character...how can I put this? Twas a mere flesh wound. 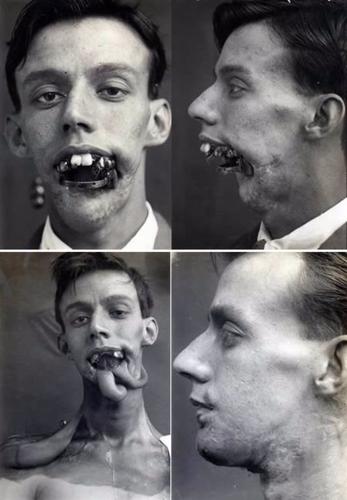 The way you describe the injury makes it sound like the only part of his head to be injured is just the jaw and tongue, and not even the bones of the jaw, just the tongue. With some lucky placement, there really won't be that many injuries, except for the fact that his tongue is now unusable. It's really no different from being born mute, though he might have a hard time chewing food without a tongue.

Medical Care - bad. Antibiotics haven't been invented yet, fortunately, anesthesia has been. So he'll be put up in a hospital so they can stitch his mouth shut, but he'll be high on drugs in the process.

Communication - Moderate. ASL (American Sign Language) has been invented at this point, unfortunately, it's not widely known and people don't have smartphones. Carrying around a set of flashcards and a notebook and pencil is probably a good idea, and having a friend learn at least the sign alphabet. To clarify, you can make some noises without a tongue. Just not most of them.

Job - Yes. It's hard to be a police sergeant if you can't yell 'Stop, thief!' And job unions haven't been invented yet and hazard compensation was essentially a myth. That said, he's not actually disabled when it comes to fighting, so if, say, he was part of an 'Unspeakables' style team, they'd probably just give him a raise.

Education - Apparently, Boston has one of the oldest schools for deaf-mutes in America, the Horace Mann School. No problem. (Except that it's a day school for children, but I'm sure the teachers would be fine to tutor this guy for extra money.)

31
What would be the consequences for Earth if the moon disappeared?
1
How would a strong humanoid heal from muscle injury
11
What would be the consequences of overusing a magic system that consumes energy from human metabolism?
4
The 3% long term consequences
0
What is the plausability of biomechanical muscle mass?
49
What injury would be of little consequence to a biped but terrible for a quadruped?
6
Which sounds could a tongueless person produce?
44
Would a horse be sufficient buffer to prevent injury when falling from a great height?