Can I have a forest in the rain shadow of a mountain range?

I've pretty much finished the map of a world I'm building for a fantasy novel, but I've realised that on one of the continents I need there to be forest on both sides of a large mountain range. I've never made maps/worlds before so have had to research everything from scratch and I didn't really account for rain shadows.

The climate in this area is humid continental. The people living on the right side of the mountain have to some extent used magic to help the forest grow, but I would like the forest to exist naturally rather than have it all be down to magic.

The world is like Earth, only the land masses are different.

Is it realistic for there to be a forest to the right of this mountain range, or would this be in the rain shadow and too dry for a forest? If so, are there any other conditions I could alter to make it work?

I'll include a picture (with my crude climate colouring overlaid, though still unfinished on the other continent): (Some of the lakes are black, because I realised I had too few lakes and rivers and went back to add more.) I've circled the area I'm asking about. I had planned for both sides of this mountain range to have forests, but more so on the east side. 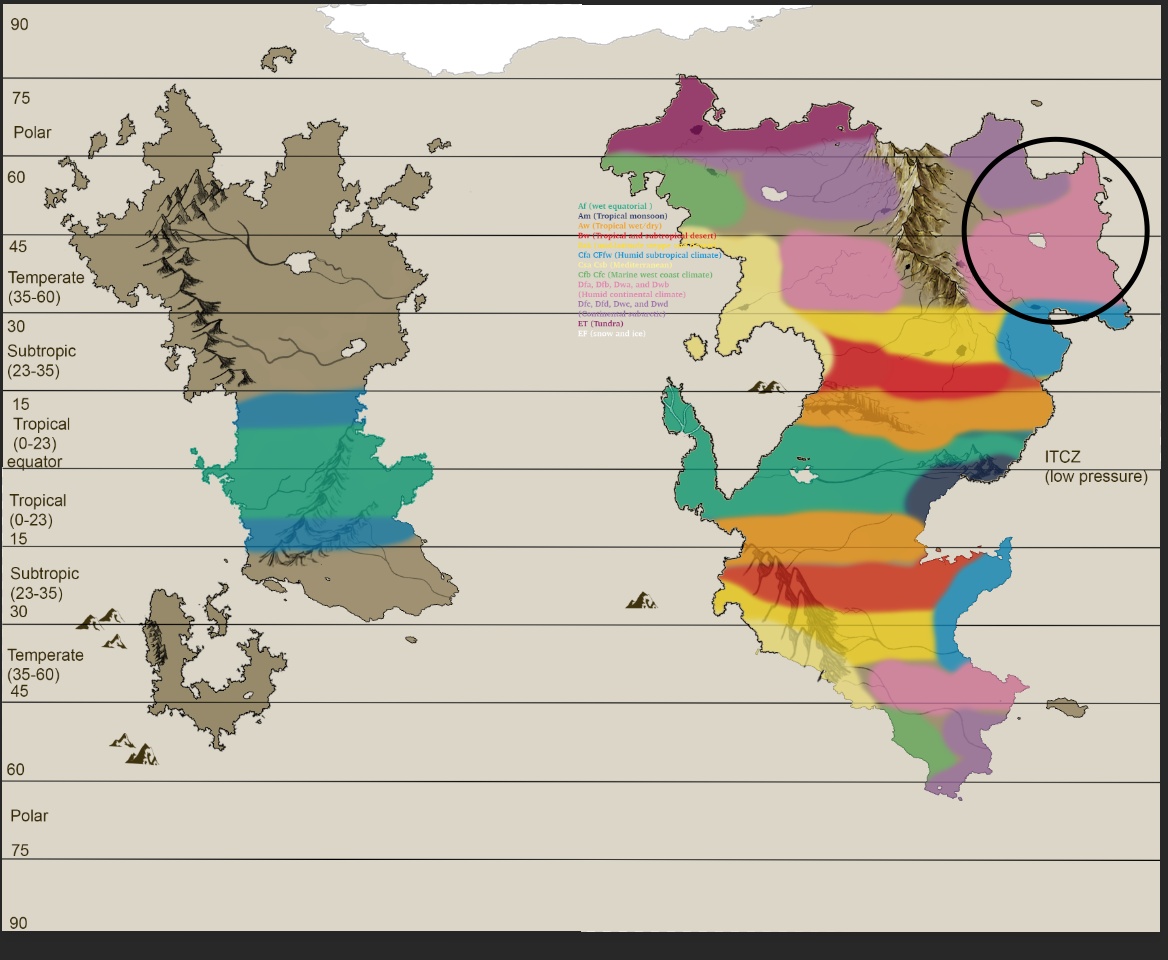 If I add a great lake on the west side and make a deep inlet on the east coast to bring some warm water in to evaporate/make rain, does that help? Kind if like on this map (except I'd try to polish it a bit): 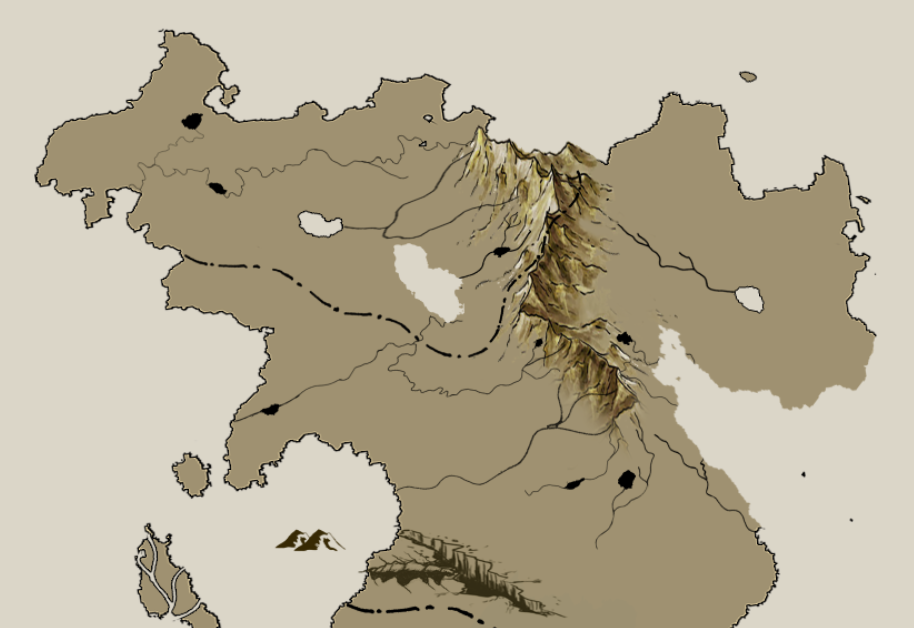 Yes, depending on wind patterns.

It's definitely possible for a mountain range to have significant precipitation, so long as there isn't a strong, dominant wind pattern going across the mountains.

Looking at the US, in much of the West there are large rainshadow regions. These are behind the Cascade and Rocky mountains, because there's a strong, persistent wind system from West to East. Further North, though, areas like Montana are heavily forested, despite being "behind" the mountains, because they get moisture from air currents from the North, as well.

Wind patterns on Earth are shown here. They change seasonally, in many areas, so fixed maps aren't as useful. (That map shows wind patters as they are in real time, I think.)

The Appalachians don't have any significant dry areas surrounding them, in part, because there are no major cross-mountain wind systems. Major storm systems come from multiple directions, so the effect of the mountains in regulating the climate is severely reduced. (Plus, they aren't terribly tall, so their rain shadow effect would be small, even in the case of strong prevailing winds.)

Many mountain ranges in the far North, such as the Urals in Russia, don't produce deserts because Arctic air currents provide both sides of the mountains with different moisture-rich wind systems. For the Urals, winds from the West bring warmer air from across Europe, while winds from the East bring cooler (but still relatively moist) air from across Siberia.

On your map, you could easily have wind systems dominated by Arctic winds on at least one side of your mountains, perhaps with a dominant wind system coming from the South in the other direction. Your climate pattern would be similar to that present in the Ural mountains, with forest present on both sides, but with one side markedly colder than the other.

The answer is almost certainly yes, unless there is a unique localised climate (like the dry valleys in Antarctica or the Atacama Desert).

Although smaller in scale than the large continental regions your map depicts, the climate pattern of Te Waipounamu (South Island of New Zealand) is a good example of a rain shadow effect where forest is the primary biome on both sides of the mountains. 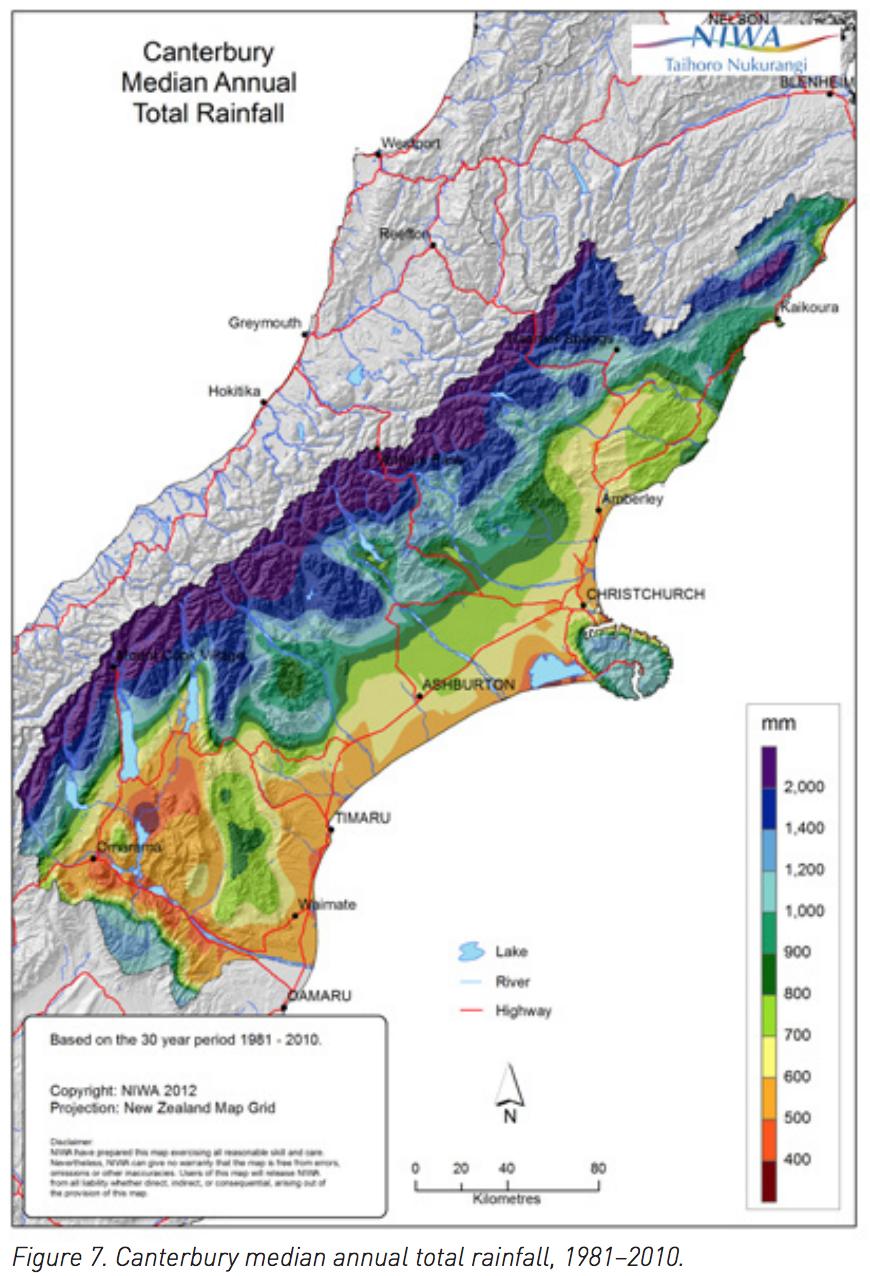 Before humans arrived and started clearing the landscape with fire, the eastern river plains were a giant podocarp forest of enormous totara, matai and kahikatea trees, with beech forest covering the high foothills. The eastern plains receive much less rainfall than the west coast, but there is easily enough water flowing through the landscape and enough rain coming off the ocean to sustain a large forest. Sadly it no longer exists, except in small isolated patches.

In this map of the original forest cover (1000AD), you can see that the dry tussock landscapes created by the prevailing rain shadow winds are mostly in high mountain valleys and plateaus. Everything else is forest. 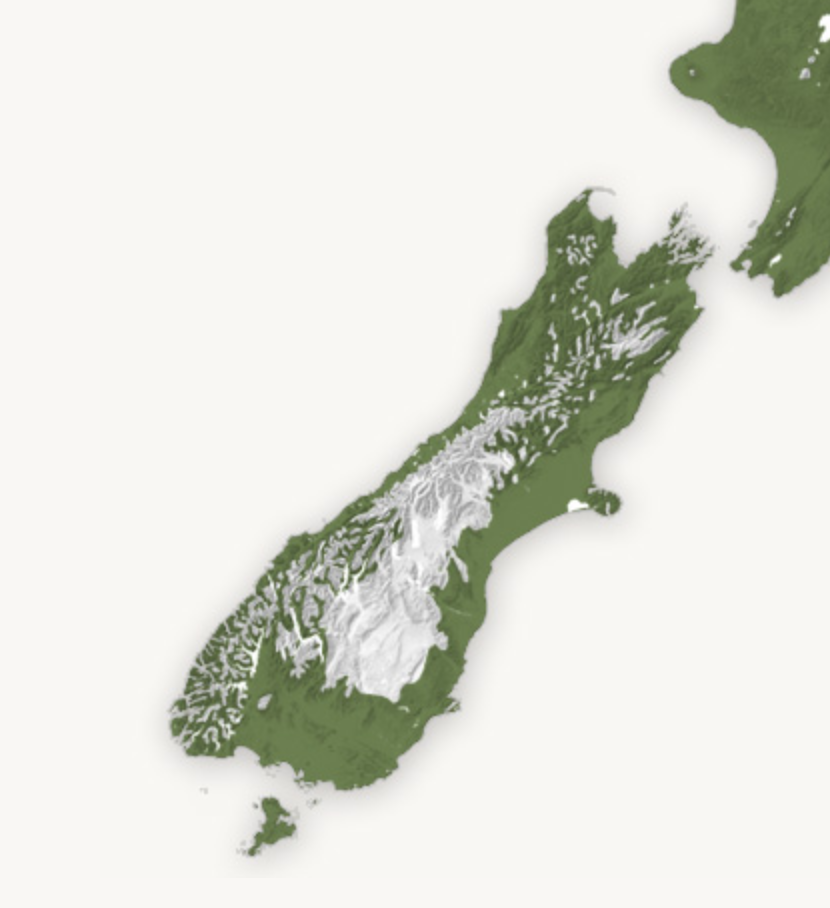 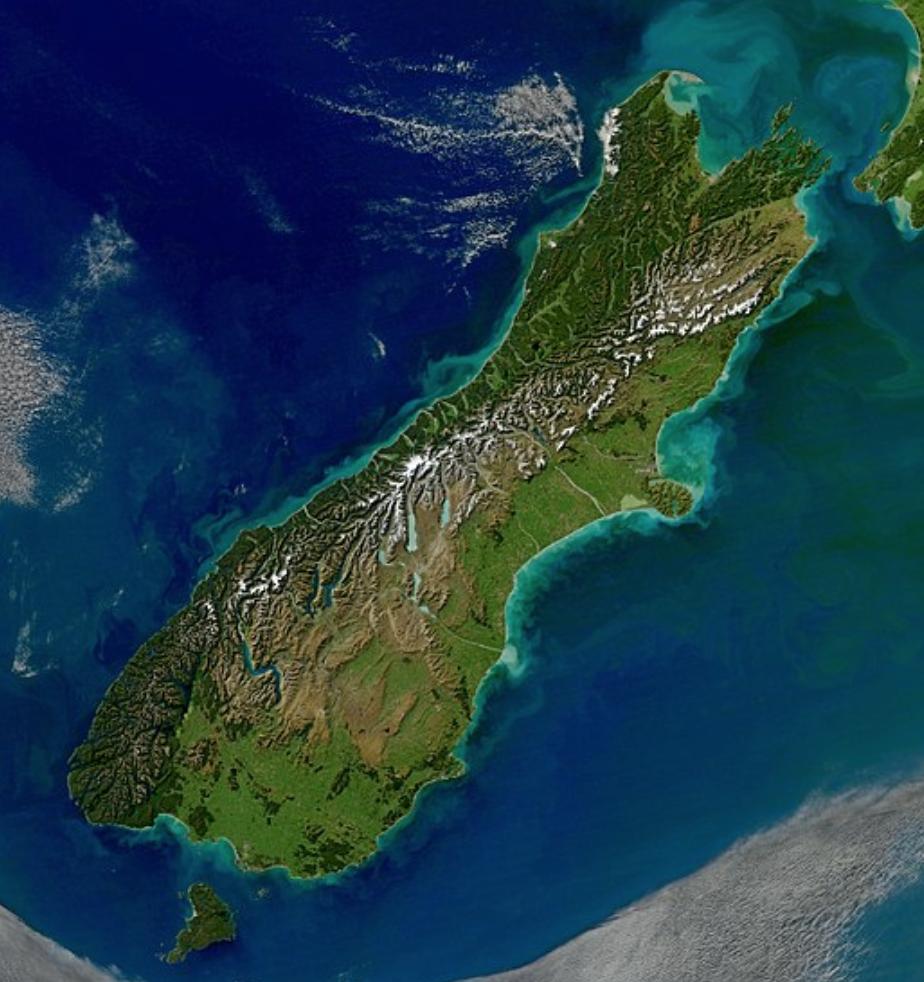 Key things to think about:

Yes. Example: In western North America, there are forests of arid tree species (Juniper, Lodgepole Pine) in the rain shadow of many mountain ranges. The trees are slower-growing than their wet-side counterparts, the forests thinner and more sparse-looking.

You may not need to look any further than the Andes and the Amazon basin to find an example on Earth. There is dense rain-forest "to the right" of much of the Andes mountains.

If you look at the western end of the European Alps, they clearly hook around to the South in the vicinity of northern Italy. The natural vegetation on both sides of the North-South section is deciduous forest.

Certainly. A very good example is the Scandinavian peninsula. As you can see from the map below, there are lots of forest to the east of the north-south mountain range that forms much of the border between Norway and Sweden. They don't get as much rainfall as on the other side, but enough of the rain that falls on the mountains make it into the eastern valleys as rivers.

These valleys are also warmer than on the other side, since the dry air going down heats faster than the wet air going up cools. Since your mountains are rather far to the north in your world, this is an important factor.

Something that works against it in your world is that the west wind reaching your mountain range has travelled across a lot of land, giving off the moisture it picked up over the sea. You may want to include something like the Great Lakes to the west of the mountain range where the wind can pick up moisture. 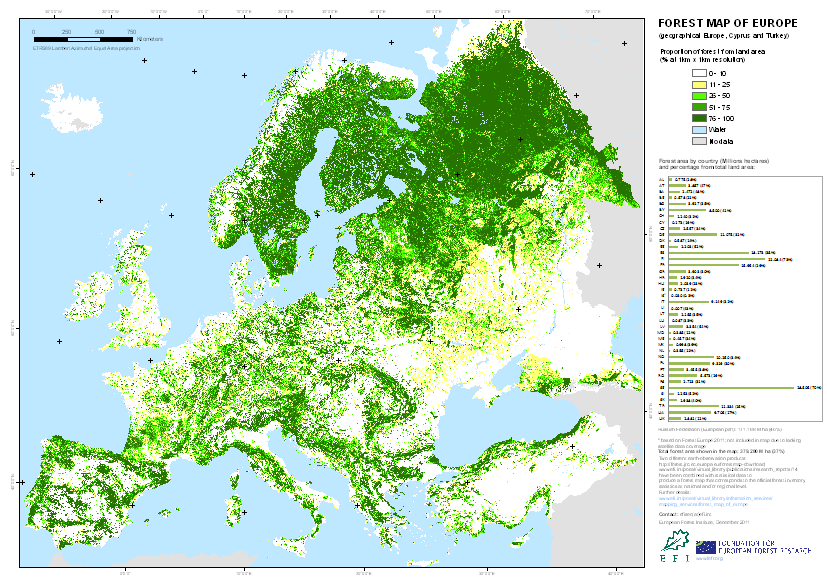 If you want a more exotic landscape, postulate an irrigation tunnel drilled through the mountain range to capture precipitation from the upwind side. This is pretty much Denver Colorado and the https://en.wikipedia.org/wiki/Moffat_Tunnel.

The water is then used to create a forest, possibly by having the outflow spread to a wide number of adits on the downwind side or a level canal-like structure made of rock that overflows at many points (think infinity pool).

Not the answer you're looking for? Browse other questions tagged reality-check environment earth-like climate geography or ask your own question.

6
What is the climate of a mountain range at the border of the polar front?
7
Constructing a desert area
5
How would a large arctic mountain range affect the weather?
8
How can I get my continent placement and latitude lines right to make my climates work?
13
Are these climate zones somewhat realistic?
6
Is my biome/climate map realistic?
3
Magical Island question part 2: How to add desert to it
3
Where would rivers and lakes make sense on this continent?
5
Is The Climate Map for My Alternate Earth Accurate?