How might dragon remains be turned into a jewel?

I have typical dragons: Huge, scaly, winged, and fire-breathing. I also have dragon magic, but I'd prefer answers not to draw on this too much. In my world, a planet similar to earth, dragons live on a separate continent from humans, so sightings are rare, and even rarer are actual pieces of dragons, e.g. a scale, tooth, or vial of breath. Obviously, since when dragons are alive, they can use these things to protect themselves, humans think it easier to take parts from dragons who are already dead through natural means. Dragons, being fairly intelligent and more civilized than most animals, bury their dead in a huge underground cavern far below the crust.

Unfortunately, I have certain scruples against humans wandering around in the great tomb, hacking off bits of the most recently deceased dragons. In fact, I don't particularly care for the sort of human who would want dragon parts, and I want to make getting scales, teeth, etc., harder than that for them. In order to force humans to attack living dragons to get the parts but also make dead dragons still, well, really cool, I thought the dragon remains could turn into diamond, diamonds, or some sort of precious stone/jewel. I'd heard of the carbon from human ashes being turned into diamonds through high pressure and high temperatures, and I wondered if having the tomb be a *hundred miles under the surface of the earth, maybe even under a volcano, would raise the temperature and pressure enough to do something of the sort to the remains.

Obviously, dragons don't have the means to separate the carbon from the other ashes, supposing there were any, so how might the dragon remains be **jewelified?

This is subject to change.
Er, heh heh!

"Standard" petrifaction like what can happen to wood of the bones, teeth, and probably scales is highly likely if your dragon is buried deeply. Depending on the particular processes that occur parts of the beast may be opalised.

It is also possible, depending on the make up of your dragons, that parts of them are already composed of jewel like materials, for example diamond has extremely high thermal conductivity so it may be useful for heat dissipation in a very large creature since the cubed-squared law is not kind at such extremes of size. Conversely certain members of the Serpentine family are extremely heat resistant making good fireproofing for areas like the snout.

Suppose that dragons shed. Scales grow for a time, then slough off when they get too large and heavy. This usually occurs when the dragons groom, but they also shed during flight. You don't have to go all the way to diamond: Quartz is quite hard, and gem quality quartz comes in a huge variety of colours. Because it's build up a molecular layer at a time there is room for all kinds of optical effects.

Take the process internally: skeletons made of sapphire (ruby) in intricate trusses.

Thought experiment: What if you ruled a relatively poor country. If someone from far away wanted to buy dead people, would you sell? A real way that criminals can pay back their debt to society.

Turn it around: Can you trade for dragon parts?

Encase them in amber. 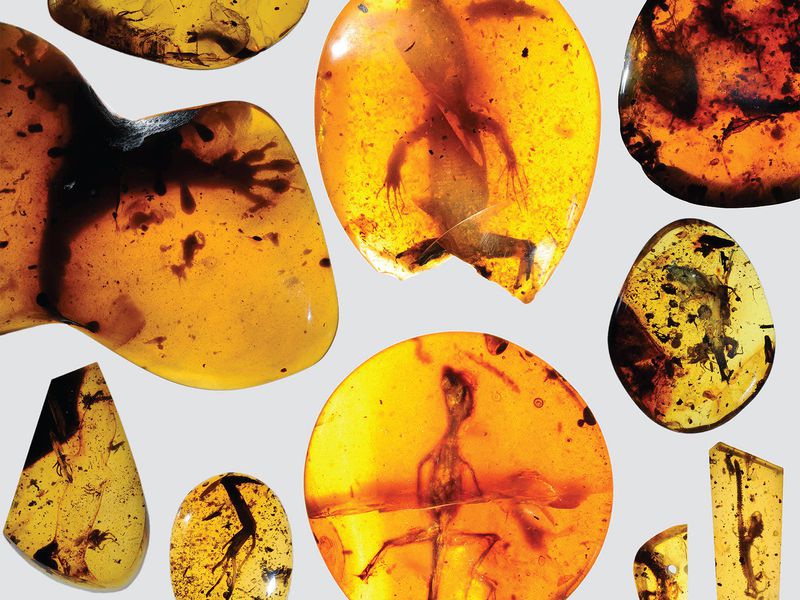 Dying dragons lie down under specific trees that occur in their lands. With their dying energy they swipe at the bark. A cascade of amber dribbles down over them as the die, anaesthetizing them and entombing their remains. Eventually these enormous trees will grow to cover the dragons at their feet, reclaiming both their amber and the material resources of the dragon. Lucky adventurers might find portions of an amber-encased dragon protruding from the great tree and with effort pry something loose.

Note: these trees are not unprotected...

Like fossilization, opalization can occur if in the right conditions.

Eric the Pliosaur is one such opalized skeleton discovered in Australia 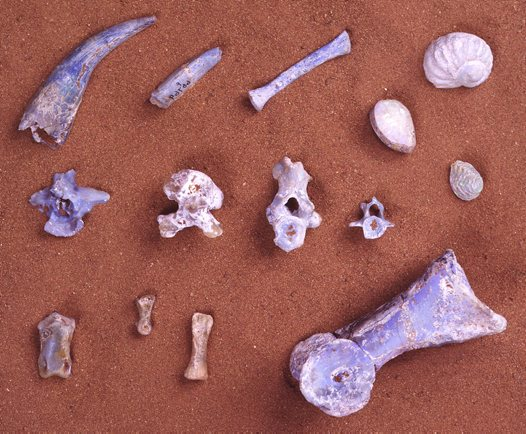 Perhaps it can be explained differently

When a dragon leaves it's nest, it does something unique among all animals. It goes deep into the earth, further down than any man has gone or ever will go, and digs it's dying place. The dragon keeps the location of it's dying place secret throughout it's life, but remembers where it is. And when a dragon feels that the end of it's life is coming, it crawls through the caverns it last saw in it's youth, and enters the dying place. The natural death of a dragon is something of a wonder. For when the dragon enters the dying place, it seals the entrance and waits for Death. When Death finally arrives and stretches out his skeletal hand, then the dragon opens it's mouth one last time and unleashes a fire more powerful, more hot, then it has ever released. The fire swirls around the dragon, the earth trembles and falls above it, and the heat and pressure turns the dragon into a diamond, to lie forever within the depths of the earth.

Something similar to this could be cool.

BTW, I wrote that explanation myself, so you don't have to worry about copyright or anything.

Okey dokey, after a great many requests for an expansion in the science based aspect of this, here is the mechanism.

The dragon, when it is about to die, goes into an underground cave it dug earlier in it's life and closes the entrance. The dragon then breathes extremely hot fire, which causes the cavern to collapse, and brings millions of tons of earth down upon the dragon, causing it to turn into a diamond.

As you can see, this parallels my poetic explanation, I guess I just had to clarify. Thanks for the help!

After death, deep in the earth with still air and warm temperatures, the "stuff" that lets dragons breathe fire contracts and distills inwards and glows hotter and hotter until the dragon itself is forged and tempered in its own flames along with the last gasps of remaining magic.

Ancient history and rationalization: Because dead dragons explode after a while, the early dragons took to burying them deep so that they didn't explode everything around them, too. This became a sign of reverence, the dead must be treated with care. The ancient tradition continues even to this day...

I'm going to offer something of a frame challenge here - is the underground cavern really required?

(Because if it is then the answer is simple - living dragons guard the resting place of their dead).

Instead have the dragon funeral rites be a ritual internment in liquid lava. They are taken to an active volcano and there returned to the fires that birthed them.

No human has any chance of getting at those remains - not that much will remain.

My answer is a combination of Ash's and Patrick's answers above. Perhaps there's something keeping the volatile gasses that power a dragon's flame breath in check, that shuts down when it dies. The end result is that when the dragon dies, it detonates about 15 minutes later. Every organic part of the dragon is incinerated in the blast unless the organs that allow fire breath is removed and taken away. The non-organic parts of the dragon (namely, the gemstones in its body that aid with heat dispersion) are not incinerated and remain.

Dragon funerary rites work like this; the dragons come in after the dragon detonates, gather up the gemstones, and melt the gemstone down into a single, brilliant gem. This gem is then buried as if it were the dragon's body because it kind of is.

This answer also adds another factor that makes dragons incredibly dangerous to hunt. The most dangerous part about hunting dragons for their parts is not actually slaying the dragon, it's the procedure to remove the flame production organs after the dragon is slain, lest they detonate and incinerate the dragon's remains. This procedure can take upwards of 10 minutes under the absolute best of conditions, and can easily take well over 15 if the conditions aren't perfect, which can lead to the organs detonating in your face while you're trying to remove them. But rush any part of the procedure, and you damage the mechanism holding the flames back, causing the organs to detonate in your face anyway.

Not the answer you're looking for? Browse other questions tagged science-based materials dragons temperature death .

9
Semiliquid atmosphere - Is my premise/conclusions correct; and will it get the result I want?
9
Developing a scientifically accurate species of dragon-like humanoids
1
Can human remains be turned into crude oil?
18
Bone Decomposition
9
How to restrain your dragon?
7
Why don’t dragons fly low?
20
How could a dragon-proof toy work?
3
What is the most plausible way to do electronic respiration in humans?
4
How to make this lightning strike real without technology or magic?