I have an icy planet with temperatures that average about -100 degrees Fahrenheit (-73,3 °C). The planet also has thousands if not millions of domes scattered across its completely icy surface heated to reasonable habitable temperatures ( 40-70 degrees Fahrenheit (4 - 21 °C) by natural processes. Is it possible that these domes could allow enough light in for plants to photosynthesize if maintained by some creature?

Edit: This dome would ideally be completely enclosed in ice.

According to this reasearch, your ice will block around 60% of the light. In addition to that, greenhouses block 30-70% of the outside light.

According to this site, "Vegetative Growth (Leafy Greens/Herbs)" requires a minimum 12 mol/m²/d. Here is a diagram of the U.S.A. based on mol/m²/d. 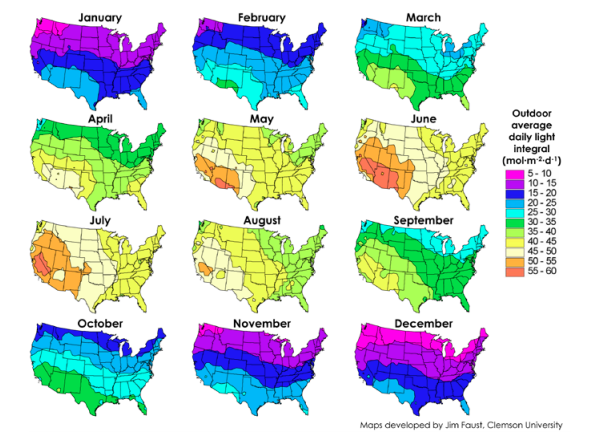 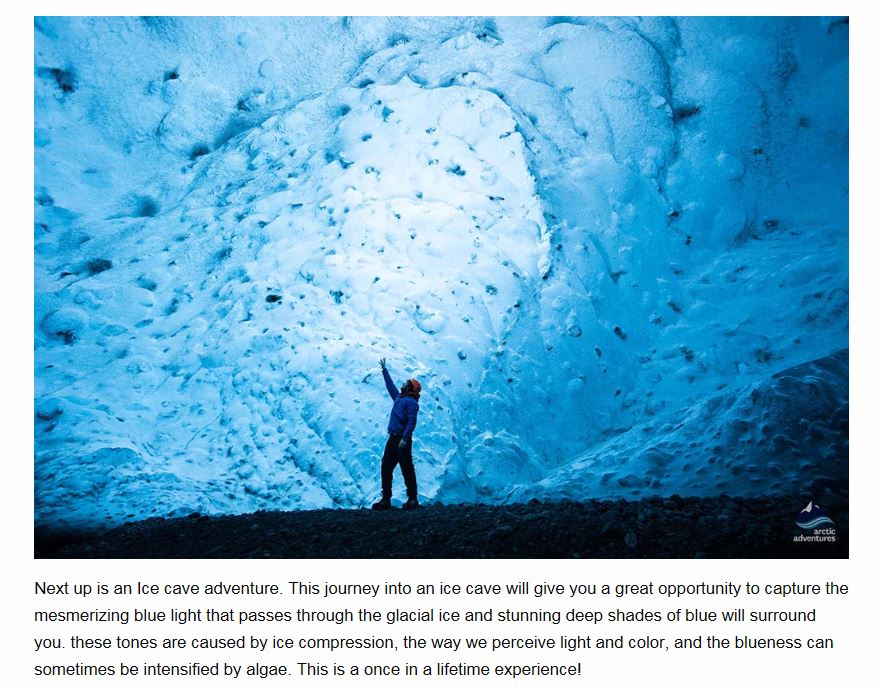 Light can pass thru clear ice. The ice caves in Iceland look super cool. In viewing various pictures of ice caves I have never seen plants growing in them, but there may be reasons for that other than darkness - like it is cold, or there is not really soil, just pebbles.

If on Earth light can illuminate thru ice to this degree (although maybe it is a long exposure...), you can make your ice domes lit beneath as well. Despite being cold, it might be very bright on your planet - perhaps the atmosphere is thin and does not retain much heat, there is no cloud cover, your star is super bright or what have you. If there is a lot of light there will be a lot to get thru the ice.

Getting into the weeds - another reason plants might struggle under the ice is that plants mostly use red frequencies and those are the first to be absorbed in a passage thru ice or water which is why it looks more blue in there (and at depth in liquid water). If you want earth plants you might need to adjust incident light frequencies to have more red starting out so more red gets thru. If these are alien plants you can have the use greens and blues for photosynthesis.

While Bilbo Baggins answer is already great, he did miss an important piece of information you gave us: The temperature of the planet. With this I was able to figure out its distance from the sun, assuming it is a sol analog and making some assumptions about albedo. Assuming your moon has an ice world appropriate albedo similar to Ganymede of 0.43 it would need to sit at 1.46 AU from the sun. This would only make the situation worse. Yet if I assume that the same heating process that keeps the domes warm, I assume geothermal heat from tidal heating, which will require a HUGE moon or a parent gas giant, rejuvenates the surface on a regular basis as it happens on Europa and Enceladus, assuming an albedo of 0.81 like Enceladus is reasonable. This would mean that the planet receives 40% more light than Earth due to its distace of only 0.85 AU from the sun.

If we now assume it has a very low axial tilt, an equatorial band where the light remains strong enough all year long to allow photosynthesis in the domes is conceivable. For domes in the lower latitudes, I suggest you look into chemosynthesis and the bizarre environment of the Movile Cave, where a perfectly healthy ecosystem has existed form millions of years without sunlight. Volcanism could supply the necessary chemicals to keep these dark domes running.

That the domes are maintained by some creatures opens the possibility that the plants either use a combination of chemo- and photosynthesis, have evolved to live with way less sunlight than Earth plants (extremely slow metabolisms similar to those found in some endolithic bacteria or the capability for hibernation like polar plants and animals do on Earth are options) or were genetically engineered for this environment if it isn't natural. As some guy said: "Life always finds a way."

Not the answer you're looking for? Browse other questions tagged flora temperature ice or ask your own question.

2
Use ice to climate control settlement
3
New York in an Alternate Ice Age
0
Frozen inside an ice cube
1
Rocky core, internal ocean, ice crust, external ocean
1
If ice was denser than water what plants could survive?
16
How to make ice magic work from a scientific point of view?
2
Floating Ice Homes