The setting: A planet with two main landmasses, each one's center located more or less at each pole of the planet. Liquid water ocean in between them, wrapping fully, if not directly (due to the non-symmetrical nature of landmasses on either side), around the equatorial region of the planet. The planet has a moon (EDIT) or co-orbital planet that is of appropriate size and distance to exert a significant tidal pull on the ocean, and the ocean is of adequate depth and water volume to show tidal effects.

Is there any variation of the details (oceans bigger or smaller, moon closer or farther, etc) of this generally vague setup that allows for tidal forces to get the ocean moving in a river-like flow around the equatorial area of the planet? (as opposed to some misunderstanding I have of Tidal forces making this entirely implausible)

EDIT To provide some background of where I got the idea for this question: I've heard about tides in certain places on Earth being exaggerated due to resonance and oscillation matching the shapes and sizes of bordering land. From there, it seemed to me that if the tide frequency (orbital frequency of the moon) also happened to resonate with the size/shape of the ring/ocean it would flow something like water in a cup when you swirl it around, just on a planetary scale. (also, I understand that this would likely drag the two bodies in to tidal lock, eventually, so the exact time-scales need not be too long, just "long enough" for a story)

Your planet is a linear motor

This is something I proposed in some detail in this answer. Your oceans are driven by a magnetohydrodynamic drive to constantly circulates the narrowly bounded ocean around the planet.

This is how it works:

So this is what you need on your planet:

Get all the characteristics just right, and you now have a linear motor. The energy comes from two sources. The planets magnetic field takes thermal and kinetic energy from the planetary core to help drive the oceans. The other energy sources is the kinetic and rotational energy of the planet relative to the primary and the primary's interal thermal and kinetic energy through its magnetic field.

Ultimately, you have to consider that moving an ocean for a billion years takes a lot of energy, so it might not be possible for this planet to exist in such a condition for a long time, from a hard-science perspective. But it could exist for some time, so that is good enough for a good story!

Just possibly, maybe, but not easily.

Ocean movement due to tides is mostly back-and-forth with mixing. It can be very complicated around barriers and in estuaries and the entrance to bays and places like that. In the deep ocean near the surface the motion of any given bit of water is more-or-less circular during a cycle of the tides.

Don't forget that the pulls involved in producing tides are cyclic, and pull "back" as often as "forward." So which way do you expect the sustained flow to be?

Ocean currents are driven by wind, salinity differences, temperature differences, and gravity. And occasionally earthquakes. This is how you can sustain flow in a direction. For example, consider where a fresh water river enters the ocean. This introduces non-salty water at a different temperature. This will tend to flow steadily in a direction determined by the various surrounding details. Or consider the existence of trade winds that blow in one direction much more of the time than any other. This will tend to drive surface water in that direction, returning it along some other flow path.

So the usual naturally occurring situation will not mean tides produce a sustained flow in one direction around the equator. You would have to construct something extremely contrived. Imagine, for example, a sequence of bays just angled perfectly to produce very high tides such that water flows up and over some barrier on one side. But the shape of the ocean shore on the other side did not produce such high tides. You'd need to "focus" the shape of the bay on one side, say the west side, to amplify the tides. Then at only the high point of the tide it spills over the edge, and only in one direction. You'd need a whole series of such all around the equator to produce anything like a sustained flow. Note that they would not need to be above the surface of the ocean, only close enough to the surface to focus the tidal flow in this manner. 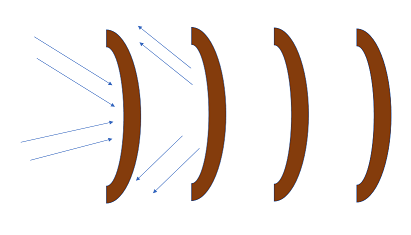 Maybe a little like that. From one side, each terrace tends to collect the flow inward to the center. From the other it tends to disperse it. So the first half of the daily tide cycle gets pushed in, and the second half gets pushed out. If you had a series of these all the way around the equator, the water would tend to flow west-to-east in the middle, and east-to-west along the top and bottom of the terrace. Note that to work they would have to be many 100 km long, and there would have to be a lot of them, probably all the way around the equator. Plus they'd have to be spaced just the right distance apart.

So a wild idea of how that might have happened. Maybe many centuries ago the water level was much lower. An ice age perhaps? And the land at the equator was above the ocean. And the people who lived there then did a lot of terracing and shaped the land all the way around the equator to produce good growing. Maybe something like rice that wants to grow in water some of the time? Maybe they faced all these terraces towards the east so they got the morning sun. And the shape of all these artificially constructed hills is just perfect to focus the tides.

The ocean will already flow that way due to existing effects caused by the planet's rotation. It's doesn't need a moon and tidal effects to do it. See, for example, the Antarctic Circumpolar Current which does exactly what you want, albeit at a lower latitude.

6
Almost tidally locked to moon and the tides it would create
6
Size and Effect of Ocean Tides on My World
8
How to have high tides in the tropics?
19
Is there software to help me model tides?
3
Climate on a planet with huge tides
1
How to make tides on my world less destructive?
4
How much can the shape of the oceans affect the tides (on my earth-like planet)?
7
How to make a world with very long tide cycle
2
Tides on a tidally locked planet