How can leaves knock out a dragon-like creature? [closed]

The "hero" of the story is a biologist/botanist that lives in the 30th century. All is fine...high-tech city, lots of flying cars, robots flying around. She works at a big lab, with a room next door testing some time travel to future teleporter. She works in a greenhouse inside the lab.

One day, BOOM! there is a explosion in the lab next door and she and her little greenhouse are teleported three millennia into an post total-disaster future in which technology is no longer a thing (not how it used to be, they have electricity, but no cars/planes/computers/etc).

The story moves forward from there. There is some "she is the chosen one" silliness. To prove that she is the chosen one, she is obligated to fight at an arena (but she gets away with an excuse to visit her greenhouse one last time before the fight, after one of her friends tells her that the creature that she's going to fight is like an gigantic lizard) with an terrible reptilian beast about 7 times her size.

She manages to knock out the beast with little effort, just by standing there, almost shoving some leaves of a plant up the beast's snout. Then the fight is over, and the breeder of those gigantic voracious lizards asks her what the hell did she do to bring it down with such ease? He's been breeding them for years and never seen anything like it. She says she used a plant and shows him the leaves. The breeder asks why and how they work.

And then I HAVE NO IDEA.

I researched some plants that are toxic for lizards, but even so I can't think of an plausible explanation for it to cause an knockout in seconds on a beast that big. Any suggestions on how I should craft this particular plant and its properties and why they work?

Before the accident, she was working on natural solutions to lizard infestation problem. She genetically engineered a plant that smells like good food to lizards, but produces a neurotoxin that kills lizards when they eat it. Genetic engineering cannot do that now, but you are talking about 30th century.

Definitely read up on Daniel and the Dragon.

In the brief but autonomous companion narrative of the dragon (Daniel 14:23–30), "There was a great dragon which the Babylonians revered."[8] In this case the supposed god is no idol, but an animal. However, Daniel slays the dragon by baking pitch, fat, and hair (trichas) to make cakes (mazas, barley-cakes) that cause the dragon to burst open upon consumption. In other variants, other ingredients serve the purpose: in a form known to the Midrash, straw was fed in which nails were hidden,[9] or skins of camels were filled with hot coals,[10] or in the Alexander cycle of Romances it was Alexander the Great who overcame the dragon by feeding it poison and tar...

Your botanist knows the story, and decides to follow Daniel's example as regards killing a dragon without fighting. But she makes the tar using her genetically engineered poppies. It is black tar heroin. 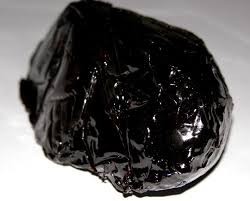 with the strength of carfentanyl. The dragon likes the smell of the fat and your botanist's hair. The black tar heroin puts it to sleep in less than a minute. Once it is asleep she walks up to it and puts a flower on its nose.

Dragons will almost certainly have unusual metabolism. After all, they're huge, they can fly, and they breathe fire. Something unusual there.

So it is also unsurprising that they will have certain sensitivities. For example, you can eat a pound of raisins and have no particular health issues. (Apart from, possibly, needing to stay close to a toilet for a few hours. That's a lot of fiber.) But your dog might well be deathly ill from eating those raisins. And chocolate tends to make humans fat, it can be very toxic to dogs.

Maybe whatever the parts inside a dragon are that can produce flame, or the chemicals that in turn are burned, maybe that organ has certain sensitivities. Chemicals that you or I, or your dog, could consume for days with no particular trouble will cause that organ to mis-function. Maybe the dragon gets, literally, heart burn from eating those chemicals.

Or maybe the different metabolism that allows a dragon to fly will get slowed down by the chemical. Maybe he becomes totally lethargic and falls right to sleep. Maybe it's because the dragon has a catalyst that lets him metabolize certain food much faster. And the chemical in these leaves interferes with that. So it does not necessarily kill the dragon, only reduce it's energy flow. Draco go sleepy-bo-bo.

Possibly the dragon needs to recover those catalyst chemicals by eating specific foods, which he may become ravenous for. That could be drama worthy as well. So if you feed the dragon the leaves he sleeps. But when he wakes up he will go directly towards whatever the food he needs is, ignoring anything in the path except to swat it aside.

Now on to the good stuff, in this day and age, we are currently working on engineering and have engineered some plants already to be able to withstand insects, hostile climates, change flavor, etc: Engineered Crops. In the 30th century, it's easily plausible that this botanist could have been researching different plants and their effects on humans, lizards, monkeys, whatever. And of course, the government loves the idea of weaponizing things to make biochemical weapons because ultimately they are just more effective than a gun or a bomb. Kill all your opponents' food sources or create a highly infectious disease and you win right?

So there could have been some other people within the greenhouse that were working on creating a neurotoxin based on on the plants toxic to reptiles for instance. The amount required could be pretty small because the chemical is so potent and if she can get enough of it, she can shove it up the creature's nose and it wins. If you look at something like VX, it can act in seconds. Who's to say a botanist didn't splice something like that into a plant toxic to reptiles a means to wipe out a country's ecosystem and disrupt it from the inside out?

She could even have taken it as a shot in the dark because baby versions of these giant lizards could have eaten it and died next to the plant. She sees all the babies dead and some teeth marks on the leaves and thinks "Well I may as well try" or she feeds it one of the babies to test her theory as well if you wanted to go darker.

Not the answer you're looking for? Browse other questions tagged biology dragons poisons creature-design .

3
running like a girl on the moon?
19
Anatomically Correct Naga
26
Can an individual be their own Sovereign Nation?
13
Hydras as parasitic-mating, polyandrous amphibians?
0
Explanation to period in a sterile society
6
What could explain this unique “fruit” tree?
13
Nanomachines exist that enable Axolotl-levels of regeneration - So how can crippling injuries exist as well?
3
Weakspots of a Humanoid Iguana
12
How could dragon society avoid interacting with humanity?