How could life evolve when exposed to high temperature?

Edit: In the scenario that the temperature of a given area increases constantly over 30 million years (slowly enough for species to adapt) starting at 20°C and ending at 90°C, what are the possible species' evolutions in order to survive?

This question has a very large scope so here are some presicion.

I'm talking about area and not about an entire world in order to ignore any heavy climatic modification that would cause very abrupt change. For example, pole melting that would cause a flood.

Which temperature are we talking about?

Edit: Let's assume that the final temperature achieved is 90°C.

Edit: What is the time frame? I don't really know what timescale to use, but since you want it let's use human evolution timescale. Based on Wikipedia, the first Hominidae appeared 28 millions years ago. So let's say that our temperature increase slowly and constantly during 30 million years.

Also, my question concerns a global elevation of temperatures at all time (day and night) and at the surface.


On Earth, the highest tempeature are usually achieved in arid or desertic areas. During the day, temperature can go up to 50°C or more but during the night, temperatures drop significantly. That's why wildlife is nowhere to be seen during day and very active during night. This huge gap between day and night temperature made desertic wild life not a good example to answer my question. If you want some precision that I've not given, feel free to comment.
science-based biology climate temperature
Share
Improve this question
edited Feb 27, 2016 at 22:49

Edit: Let's assume that the final temperature achieved is 90°C

Ah, well; I was going to talk about how a higher temperature could start boiling water, and evaporation of inner fluids, which would render blood-vessels, cerebral fluids, plasma, cytoplasm; exactly 70% of our bodies useless.

To cope with a high enough temperature that your innards begin boiling, one would expect organisms to develop mechanisms of increasing their internal pressure; such methods could include:

Some of the above described adaptions would lead to other effects, for example, less porous capillaries could lead to oxygen starvation, and to counteract this creatures might respire anaerobically more often, or conserve motion (be lazy).

Denser tissues would also make creatures heavier, which would actually make moving more of an energy-consuming process, so organisms would definitely want to limit motion.

Organisms might stop perspiring to reduce body heat; at such temperatures, it would barely change anything, and would just consume water.

Instead, they would have to increase their surface area, employ a system like elephant's ears with blood vessels close to the surface and a massive surface area.

Or, they might grow spinal sails, like Dimetrodon, which could be angled differently to regulate temperature. For example, pointing straight at the sun would keep temperature lower, but if in shade you would want the sail as exposed as possible. Similar reasoning might lead to large, retractable appendages which can be used in a similar purpose. 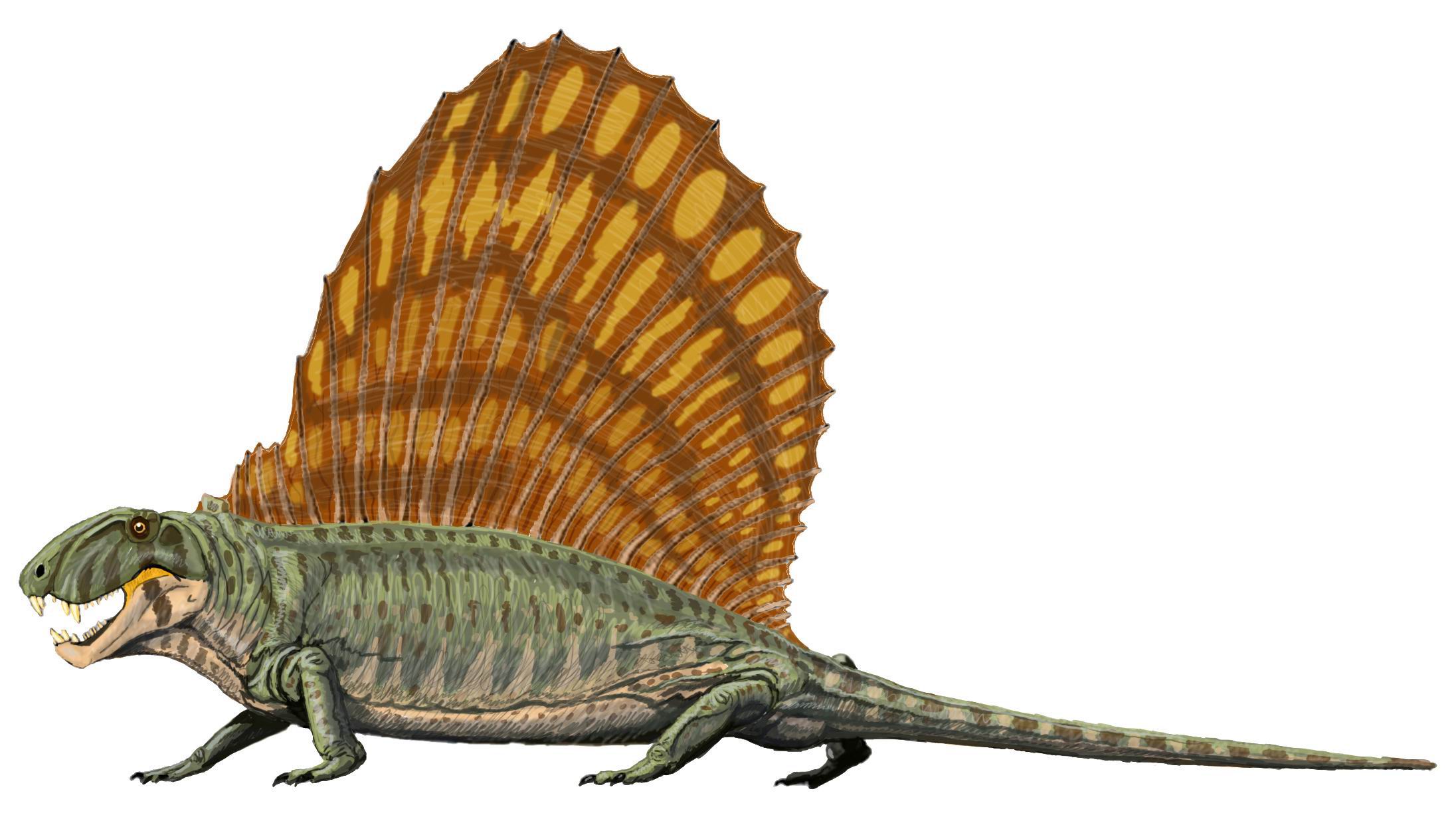 Based on hyperthermophile cell structure, you might expect organisms living in high temperatures to be quite fat, or each cell within such an organism to be protected with such fat.

We already have extremophiles here on earth - creatures adapted to incredible conditions.

In particular thermophiles and hyperthermophiles which can survive between 41 and 140 °C.

This shows that nothing prevents life functioning at those temperatures, although of course the animals adapted to those conditions are normally small organisms.

Typically, the creatures either adapt to the environment via evolving, avoiding the problem, or both.

If the surface were to get hotter, then a possible solution would be to go lower.

For example, by digging into the ground deep enough, you can get to a section of the earth that isn't close enough to the center to be hot/warm yet, but far enough from the surface that the sunlight/heat can't penetrate into, resulting in a cool section of underground area to live in.

In that scenario, it's likely that your creatures would evolve to be very good diggers, with good low-light vision, perhaps shovel like paws/hands. Or even a strain of giant worm that eats dirt... *shivers*

But what if they wanted to live on the surface? How could we make it happen?

The biggest problems here are: a) The heat and b) liquids boiling.

Well, lets apply a bit of handwavium here. What if we had a creature that didn't have H2O as a solvent in it's "blood system". Instead, what if we had some creatures that were based on having a different blood system? I see no reason why a creature which operates on Sulfuric Acid (H2SO4) would be unable to survive high temperatures. After all, Sulfuric Acid stays liquid between 10 to 338 degrees Celsius. Even on Earth, extremophiles can live in extremely acidic conditions. As noted before, there's also no reason why they can't operate in extreme heat. That means there is no reason why this creature can't grow larger, enough to use this acid as our version of blood.

Of course, if you had wanted a creature that initially wasn't able to survive extreme heat that would be another issue.

If we had creature x, and x was comfortable at 20 degrees, the likely methods of cooling itself would be through sweating. However, in the event that the temperature rises enough, eventually this would be ineffective since the creature wouldn't be able to cool itself down fast enough, and it would be just wasting water. But what if it was a small creature? A small creature with big heating problems could take a page from our current big creatures with big heating problems!

Think Elephants. They have big ears in order to make use of air and wind to cool down the blood. Depending on the overall situation of the planet (eg how much shade there is) this could be possible. By growing massive/larger sized ears, the creature could "flap" them in order to cool down. Perhaps it may develop thin membranes with spines that have blood vessels going through them for the same purpose. Bat-like wings, perhaps, but without the ability to fly.

But what if it's a flying creature?

Creature y is a flyer. It doesn't exactly... land often, because it has predators there or something. How could it deal with this?

It could learn to dive through clouds, or take dives into oceans/lakes to cool down. By doing so, it would have to evolve to be extremely waterproof. The theory here is that the water should be able to pull away the heat from the body (if the water is cooler than the creature). Equilibrium to the rescue!

Of course, the simplest solution would be if the creatures migrated when it got too hot, but that kinda avoids the question...

While it's hard to say exactly how things would evolve in terms of their body structures and behaviors I can offer some insight into what would need to be happening at the molecular level for life to evolve to handle higher temperatures.

Life is chemistry right? It's just a whole bunch of interconnected chemical reactions that have been ongoing for the last 3 billion years. Temperature is an important variable in every chemical reaction. Some reactions happen at low temperatures, some at high temperatures. Importantly, every chemical reaction in the human body has been calibrated to occur in a very narrow temperature range. Every protein your body makes has been evolved specifically for that range. Proteins are made of long chains of building blocks called amino acids that fold into unique 3D structures that perform specific roles in the body. It turns out that this folding process is very sensitive to things like pH and ionic concentrations, and also temperature. Proteins unfold at higher temperatures. It's why the egg white goes from translucent to white when you cook it. The proteins in the fluid lose their complex 3D configuration and take on a new shape which happens to be opaque. Now that doesn’t mean that all proteins are unstable at higher temperatures. The thermophiles that Tim B. mentions have evolved proteins that can fold and function at these higher temperatures, but it’s a lot of work! Basically every gene in an organism’s genome encodes a protein, (Although there are numerous exceptions to this). The vast majority of proteins will no longer work at temperatures significantly higher than an organism's normal body temperature. That means that to evolve to handle these higher temperatures practically every gene in the genome (in humans that’s roughly 20,000) will need to evolve to cope with these higher temperatures. For some proteins that may entail just a few changes that increase its stability, but for others their configuration may never be stable at such high temperatures and the body may need to find a complete workaround to do the same task. I’m anthropomorphising a lot so keep in mind all of this is random mutations occurring over thousands of generations. It is by no means a rapid process.

So, to cope with the increased temperature the human genome needs to change substantially. The majority of the proteins have to evolve to be stable at higher temperatures. At the same time virtually every other cellular process has to adapt to this new temperature as well. RNA folding, membranes, and metabolic processes will all need to be modified to work at these higher temperatures.

One thing I’d like to mention as an aside is that the body has special proteins that is makes when it is heated up too much. These heat shock proteins as they are called include a special class of protein called a chaperone. These are proteins which help other proteins fold. When cells start getting too hot they make lots of these in order to help their other proteins fold. Of course most existing chaperones would probably unfold themselves at 90 degrees C, but chaperones could be part of the way organisms adapt.

Not the answer you're looking for? Browse other questions tagged science-based biology climate temperature .

12
Day and night temperature on an Earth-like planet with longer rotational period
4
Is planet similar to Crematoria possible in real life?
7
How would a thinner atmosphere affect climate/weather patterns?
6
What happens to plants when the temperature increases a lot in a couple of years?
3
What would the temperatures on a terraformed moon be like?
5
What substance would make a good lava ocean?
1
How will seeded Earth life adjust to a tidally locked, Earth-sized moon?
3
Climate on a slow spinning planet