Could a mammal procreate if it existed out of multiple sets of DNA in different cells? If so, how? [closed]

I was wondering about creating mammals that consist out of multiple sets of DNA and if they could procreate. I am talking about a singular being that isn't composed out of multiple seperate parts creating a whole (like a Man-o-War, which actually has the same DNA for each part if some sources are believed) or where two sets of DNA exists inside a single cell (like Mytochondria that have different DNA than our cells). The goal would be to cut the amount of DNA in each cell down to fractions of the complete DNA sets our own cells have.

Currently our cells have our complete DNA inside them. When alive a cells will deactivate all DNA that it does not require for it's task, meaning a liver cell will have different DNA active than a nerve cell. However this means that these cells still have to copy the entire DNA sequence each time and require complex patterns to make sure no "wrong" DNA is activated. As already mentioned the goal would be to have each cell carry and copy only a portion of the DNA it needs and carry as little as possible unnecessary DNA, meaning that it'll have a different DNA set from cells with a different function.

As an example, the DNA could have distinct purposes but be constantly intertwined. One DNA type could be limited to purely supportive structures, such as tendons, bones and fat cells (in normal capacity fat cells are a supportive structure) while another DNA set is completely dedicated to energy regulation, from making a functional liver, lungs, cardiovascular system etc. This would mean that for most parts there are no distinct seperate parts. Like the bones that would have nerve and bloodvessel cells growing through them with different DNA.

This question already answers part of my question: Multiple DNA, one creature

However it focuses on answers of either distinct individual components or integrated DNA that basically just functions like a secondary DNA set in each cell, rather than how a two mammals might reproduce effectively if they had multiple specialized DNA sets in seperate cells.

For clarity the question again:

Could a mammal procreate if it existed out of multiple sets of DNA in different cells, and if so how could it do that?

As long as they still have specialised reproductive cells akin to eggs and sperm, then yes it's not a problem if the adult exhibits multiple sets of specialised cells that use different DNA.

Having said that those reproductive cells are going to be more complex than what we see it real world mammals. Instead of just carrying half the DNA of any given adult cell in the body they'll have to be one of two things:

Each of our cells carries a copy of our complete DNA. But mostly that stays bundled up and unusable - and also resistant to damage and wear. Tiny fragments of our DNA are copied into RNA and it is these cell specific RNA instructions that the cell uses for day to day activity. Sort of like if you had a bunch of repairmen in the field, you would send them out with a copy of the instructions they were likely to need in their assigned tasks. Periodically you would give them fresh ones as their copies got worn out, coffee-ringed, dog-eared etc.

Each cell in the body has a library of RNA specific to the type of cell it is. Here is a fine illustration of this - a byproduct of looking at RNA in individual melanoma cells found that discrete populations of non cancer cells inhabiting the tumor could be distinguished by their RNA complement. 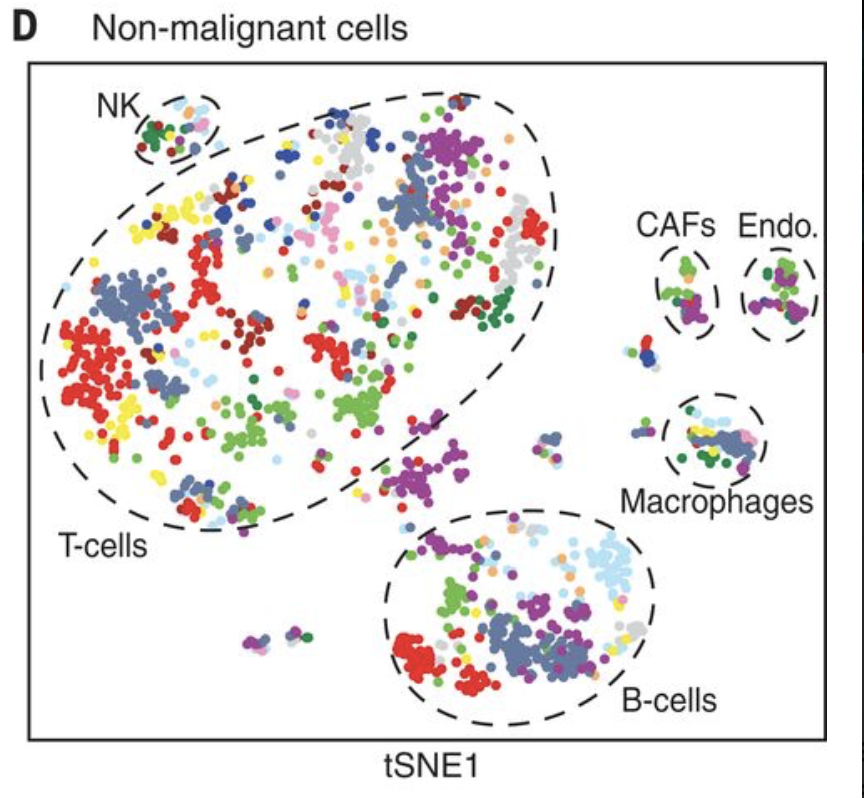 Fig. 1 Dissection of melanoma with single-cell RNA-seq. ...nonmalignant (D) cells [as called from inferred CNVs as in (B)] from 11 tumors with >100 cells per tumor (see color code below the panels). Clusters of nonmalignant cells [called by DBScan (17, 19)] are marked by dashed ellipses and were annotated as T cells, B cells, macrophages, CAFs, and endothelial (Endo.) cells from preferentially expressed genes (fig. S2 and tables S2 and S3). NK, natural killer cells.

If I understand it right, that is what your idea proposes. It is a good idea and has gotten us all pretty far.

I'm not sure I'm 100% understood your question, but this video may have the answer you are looking for.

Two-egg twins fused together during pregnancy, one male, one female. First, it thought to be rare, but with more widespread genetic testing, it came out it's more common than thought.

Other cases with one person with multiple DNS. During pregnancy the child cells might migrate out and remain in the mothers body in various organs. It could lead to autoimmune disease or help reconstruct parts of damaged organs.

Cell division introduces small mutations to the DNS. The mutated cells remain, creating their own linage of cells, which are slightly different from the original DNS it came from. The longer you live, the more versions of yourself live within you.

Best example, Canine Transmissible Venereal Tumor. It is a transmissible cancer. Weird and freaky, but the original owner of the cancer is dated back to the predecessors of the dogs (~11.000 old canine). It has different DNS and live together with the host, even jumps from one to an other.

Even if this isn't what you are looking for, you may extrapolate from this.

Not the answer you're looking for? Browse other questions tagged science-based creature-design reproduction natural-growth or ask your own question.