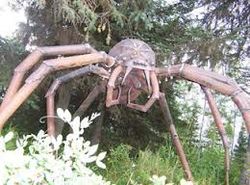 On a planet with conditions identical to Earth, how could a giant spider with a leg-span of 1 meter evolve? Could it produce silk and how much could it produce if it could? Could it walk without violating the Square Cube Law? How could it breathe?

I am going to reuse parts of my answer to Anatomically correct Arachne, which is related but not a duplicate.

We cannot approach this as if the only way for this creature to exist to exist is in the form of a giant nope spider thing without any modifications to its spider anatomy. That would be silly.

We all evolved from very small animals that lived underwater, yet here we are in human form. A much larger stretch than having arthropods growing into big sizes.

Specially because in prehistoric times, we did have arthropods that were quite big. The largest arachnid ever was a 70 cm long scorpion. That's a little over two feet, or 28 inches. It had aquatic cousins that could grow up to 2.5 meters long (that's over eight feet), though. Granted, those beasts had their weight supported by water, but look at that... An arthropod larger than a man! Not only that, but we know that there's less oxygen available in water than in air, so how could the square-cube law allow for that?

Well, besides evidences that our atmosphere was more rich in oxygen millions of years ago, there is also the fact that those arthropods had evolved their internal anatomy to allow for those sizes.

Let's go back to the creature in the question then.

Imagine if you will a prehistoric nope tarantula. It lives in a world where there is more oxygen available than Earth right now, because that's how prehistoric Earth was like. Our prehistoric nope spider is under many different evolutionary pressures, and a larger size is conferring it increased rates of survivability and reproduction.

To allow for that, the nope tarantula starts developing, throughout generations, some unusual characteristics for a spider. For example, a mutation gives it layers of skeleton, so besides the external chitinous one, the spider has internal ones as well. Over time the external skeleton is replaced with soft but thick leather. This allows it to replace its book lungs with mammal (or bird)-like lungs, which are much more efficient.

Over time, as this species of nope tarantula grows, it will evolve a circulatory system much like a worm's at first, then that of a vertebrate.

As for the abdomen, it resembles that of a reptile or amphibian more and more, with different organs going through convergent evolution to take the roles of a liver, a spleen, a pancreas and so on. Nopes spiders have excretory organs in their legs, but this species's excretory organs move to the abdomen over time.

Now, nopes spiders are known for being very agile with their legs, and weaving webs with them. Our specific nope spider, though, is growing larger by the millenia, so its six frontmost feet are only used for supporting weight now. Eventually they will be completely flat and fingerless (yes, nopes spiders have fingers - actually microscopic claws, which is how they weave and cling to stuff). Only the last pair of legs will have fingers for weaving.

In the other question I linked to, Azuaron suggested that a giant nope spider-like creature would have to have its legs below the body and not splayed. I propose a midterm solution which is close to the anatomy of a real nope spider, so the legs should be fixed below the cephalothorax. The creature is supported by eight feet, and they don't have to be incredibly heavy for their size, so I think this setup works.

I estimate that, once the creature reaches its adult size, it should weight 60 kilograms (approximately 132 pounds), with its weight divided almost evenly among its eight feet (the hindermost feet would support a smaller fraction of their weight), so on average each foot would be supporting 7.5 kg / 15.5 pounds.

Such a nope would probably be warm-blooded, with all the adaptations required for that. It should eat at least as much as a human with the same weight.

As for the web output, I think it would be proportional to its body mass, relative to any regular species of web weaving spider.

Short answer: yes if gaint spider solves the problems with thermoregulation, breathing and feeding. There were large insects about meter size (and more) in Earth's old days, when atmosphere had more oxigen. (I know - spiders are not insects, but they both are crustaceans and have same body plan)

0) phisical stability - exoskeleton would be quite thick and heavy, wich would greatly reduce there agility and mobility. It means that no high order predators (like mammals) should exist in that ecosystem

1) Thermoregulation - thick exosceleton is a good insolator. Too good insolator. They should behave like snakes - warming up in the sun and cooling down in some wet shadows. They could not do extream activities (like chasing prey, or running from predator) for long, or they just cook themselfs with inner heat. So nothing like battle with this gaint spider can happen. It is more like "hide and seek" and "who ambush whom" game.

2) Breathing - the most limiting factor. The reason why insects on morden Earth are small is exectly this. Your planet should have a lot of oxigen in atmosphere - no less then 40-50% (or much higher pressure). And that implies a lot of "fun" in DwarfFortress sense. Like selfigniting mashineoil or easely igniting steel.

3)Feeding is also a problem, because spiders can't feed on solid meat. They need to "coock" sort of sup from it's victim and then suck it in. It means that beside this spiders there must be lots of gaint insects - there prey. They should be more then ten times more common than spiders. This gaint spider would be just a rare encounter in swarms of giant ants and gaint centipedes.

1 meter is definitely plausible, but I can't see any spider getting much larger than that. Birgus latro has a legspan of 1 m, a body length of 40 cm and a weight of 4.1 kg, and they are very ungainly and slow-moving.

The largest spider in the world is Theraphosa blondi, which can reach 28 cm in legspan, 11.94 cm in body length, and 175 g in weight. In order to reach 1 meter in legspan, the spider's overall dimensions would have to be increased by a factor of 3.57, which means that its weight would increase 45.55 times, resulting in a spider with a body length of 43 cm and a weight of 8 kg.

So it seems that a tarantula with a legspan of 1 m is possible, but it would be very slow moving, making it difficult to catch prey. A lighter-built spider would be much more realistic.

There is also a way for spiders to surpass 1 meter in legspan. Underwater, many of the issues regarding respiration and movement are eliminated, or at least greatly reduced. Macrocheira kaempferi, which superficially resembles a spider, can reach 3.7 m in legspan and 19 kg is weight. Argyroneta aquatica is the world's only truly aquatic spider. It only goes to the surface to replenish its oxygen or sometimes eat its prey. Although it is only 8-15 mm in body length, it could eventually grow to extremely large proportions or an already larger spider like Megadolomedes or Ancylometes could develop similar habits.