What would Earth look like at night in medieval times?

Background: Aliens are debating whether to launch an invasion of Earth in medieval times, say the year 1000. They launch a satellite to orbit Earth and send pictures of Earth to see whether it is worth taking.

What would images of the Earth look like? I am guessing that the day half would look sorta the same as it does now. The night half is what I am really concerned about, since electric lights don't exist yet. Would lamps and fires be visible from space? Would the aliens be able to see areas of high population based on the brightness of the area?

If the aliens were orbiting at the altitude of the ISS, and if the eyes of the aliens are similar to ours, and they were looking at the earth without telescopes, they would be able to see fires burning at night. In the 1940's Selig Hecht and his associates measured that the light from a flickering candle could be seen at a distance of up to 30 miles. The ISS orbits over 8 times this distance away from the earth, so you'd need your fire to be 64 times brighter in order to see it (due to the inverse square law). So it's totally reasonable for a substantial fire to give off the same amount of light as 64 candles, or anything giving off as much light as a modern 60 watt incandescent bulb. The real question is whether people are burning outdoor fires all night in your world in any significant way, my guess would be that they would burn fires inside when they were close to population centers, and only have outdoor fires if they were away from home in the woods.

Please also consider why the aliens want to invade, do they want the people? That seems unlikely. Maybe it'd be better for aliens to look at factors other than the population of an intelligent species for their criteria of whether or not to invade. What do aliens really want, given that they already have sufficient technology to travel through space?

It's irrelevant, unless you're proposing a technology dichotomy

Aliens have traveled all the way to Earth, but the only way they have to examine the planet from a distance is optics? Ignoring the fact that they'd at least have the technology for thermal imagery (detecting fires, lanterns, even people and animals, by their heat emissions), they could easily have uber-cool Star Trek grade "biosigns" detection.

Which means it doesn't matter at all what the surface looks like, day or night.

However, just for fun...

With rare exception, the surface of the Earth would look like pristine, unadulterated habitat. The aliens would look down on a planet 99.99% free of all pollution (not including forest fires). They would see deserts, forests, glaciers, islands, lakes... and not a single electric light or asphalted road.

The rare exceptions are the handful of cities with 100,000+ populations. There were certainly a few, but very, very, few. Some thing Kaifeng, China; Baghdad, Iraq; and/or Cordoba, Spain could fit into that category.

Cities of this size would look a little patch-work, like looking down on cultivated land from the top of a mountain. But to be honest (and now that I think about it), the patchwork of farms would likely be much more visible than the crisscross of dirt or early cobble roads (and a handful of Roman concrete roads).

Frankly, I believe in the year 1,000 that the Earth would look barely inhabited at all — assuming all you have to look with is a telescope.

But, no electric lights. That means the much less powerful, much less likely to be on-all-night, and much more sparse use of lanterns and fires. Rather than the bright, almost pixelated look of a modern city at night, the aliens would see, maybe, a half-dozen or dozen areas where there was a soft orange glow (if even that, from space).

I wouldn't be surprised if your aliens saw anything other than black, with the possible exception of lightning strikes and active volcanoes.

Again, assuming all they have to look with is a telescope.

I don't believe your aliens would have trouble evaluating the Earth at all. If anything, without all those pesky humans gobbling up all the resources, the Earth in year 1,000 CE would look pretty plum.

At best, it would look kind of like North Korea in modern times: 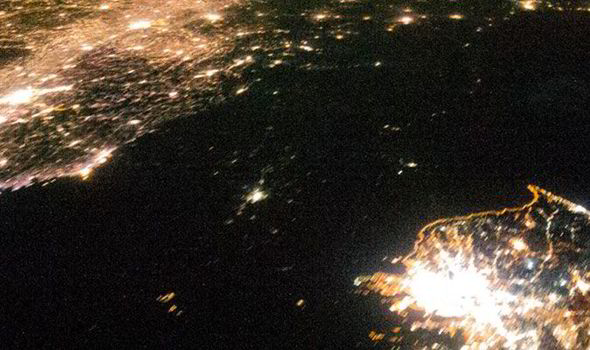 Not the answer you're looking for? Browse other questions tagged science-based aliens medieval earth satellites or ask your own question.

29
Would we ever find an alien space probe?
43
How to fight a kitty army?
1
What if aliens invading Earth turned out to be invisible?
3
Alien electromagnetic vision
3
What would a recession look like in medieval times?
0
Peeping at Antipodes: How long would it take to peek around the sun using modern technology?
9
Detecting a Starship at the L2 Lagrange Point
1
Feasibility of extra-lunar capture
4
First visible signs of human habitation on the Moon. What could we see from Earth?
3
What would the atmosphere of the Archaean Earth look like? (Before massive oxygenation)