Could there arise naturally a plant that like mistletoe attaches itself parasitically to an oak tree that can interbreed with a regular apple tree, and produce fruit that are very similar to apples?

Possible but not likely for a number of reasons:

Plants don't interbreed unless they have a recent (for varying values of recent) common ancestor. Also, the ancestor should, in fact be an actual apple tree since you want a similar fruit. It could develop a similar looking fruit on its own but that just makes it more unlikely to happen.

Also, an apple is the wrong kind of fruit for a parasitic plant. Parasitic plants have their seeds dropped onto the tops of trees (often through bird droppings) or they are light enough to be carried on the wind.

Since apple seeds aren't going to be flying up into trees (barring traumatic wind storms), you will need some creature that eats apples and then climbs (or flies to) oak trees to defecate.

The feces will have to be sticky enough and contain enough nutrients to allow the seed to stay in the tree and grow until its roots can secure it in position.

Also, if the apple plant is to be truly parasitic and not just using the oak as an anchor, it needs to learn to deal with an acidic environment. The reason nothing grows around an oak is that the dropped leaves poison with soil around it with acid.

If the apple is just anchored to the oak, it needs to learn how to draw moisture and nutrients from the air. It would be helpful if some critter nests among its roots so the critter's droppings can provide nutrients.

Now, if too many changes are made to adapt to its new environment, it is unlikely to be able to interbreed with the original apple trees.

The only way that I can see is if you introduce one or two creatures (drop the seeds in the oaks and fertilize the plant) and the apple uses the oak only as an anchor. This would mean that it is one apple tree that lives in two environments.

Over time they may have slightly different shapes if the tree adapts in a way that causes it to not grow as tall (and bushier) if its roots are not in soil but that's as far as it is likely to go without someone tinkering with it.

So: there already exists the art/science of grafting, where a small plant cutting or branch is fastened to a second compatible plant and continues to grow there. Typically when it comes to trees this is done with citrus fruits such as orange, lemon and lime, but apples aren’t that far away (evolutionarily speaking) from the citrus fruits and they have a whole slew of other similar trees they can exploit. This means we can happily imagine an apple-esque tree that is capable of growing using the support systems of another tree.

But wait! There will be compatibility issues. Not all plants can successfully graft to other plants. But you did bring up the example of mistletoe, right? So if our mutant apple tree has an invasive root system as well as being happy to ‘graft’ itself to another tree it can support both modes of survival. Initially parasitic (in as much as it steals water and nutrients, it makes sugars itself) until it gains enough of a foothold to properly integrate itself, then firmly entrenching and becoming a ‘part’ of the tree. The more close/compatible the tree the better.

The biggest problem I think you would have would be spreading. You have to somehow spread your seeds (contained within a heavy fruit) near enough to another tree (preferably high up so you can get sunlight) that they can root in the tree. Bird excrement would be an excellent way to do this, but birds pick at the flesh of apples more than the seeds. An arboreal mammal like a monkey or lemur would probably be your best bet, as they’d eat the delicious fruit, do their business on other trees, and perpetuate the fake apple cycle. Incidentally, monkeys and lemurs are common in Asia. Guess where the apple originated? Yup. Asia.

So the answer to your question is yes. It’s plausible. Plus it’d be nice to be able to turn any tree into an apple tree.

There exists a thing called the oak apple gall. 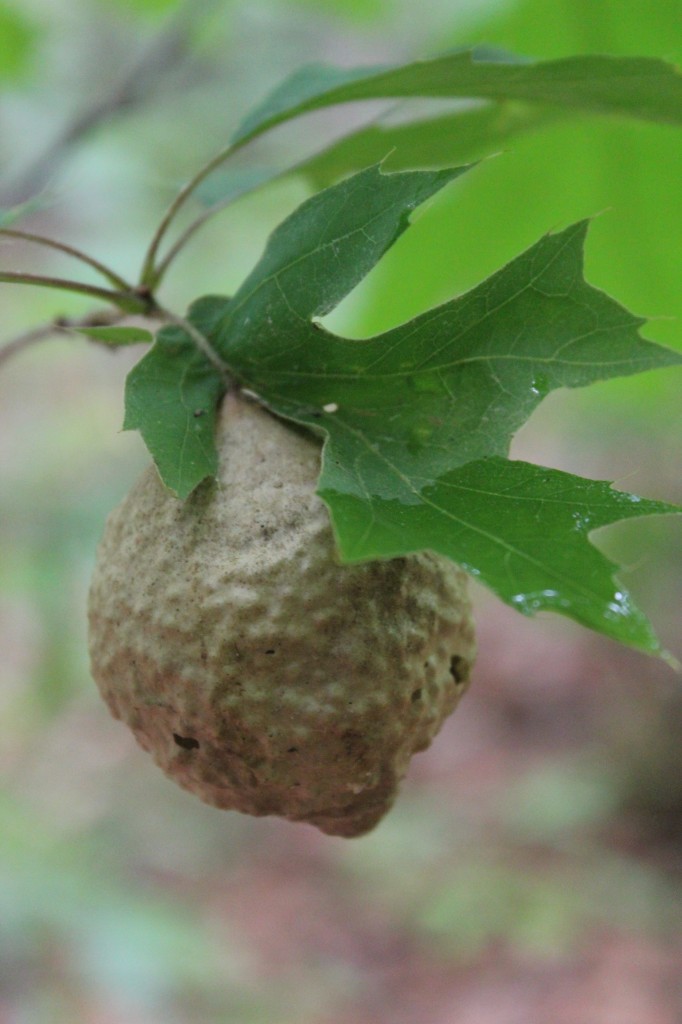 The galls are produced by a larval insect which hijacks the oak tree to make itself a case to grow in. Instead of some genetically cumbersome mix of parasitic plant and apple tree, have there be oak galls that are edible. I can imagine an insect which does the same thing and creates an apple-like edible gall.
This would be an insect which hopes an animal will eat its larva (thus the fruit) so it can grow parasitically inside the animal - maybe an insect with 3 life stages.

People in your world can remove the larva first or cook the fruit to avoid infection. Or maybe infection is not too bad and they consider it a fair price to pay for delicious fruit.

Not the answer you're looking for? Browse other questions tagged science-based flora plant-design or ask your own question.

3
What are the limitations of apple-based weapons and construction?
9
Viability of an amalgam tree
8
What factors determine the type (shape/color/consistency) of fruit?
15
Sugar-bomb tree mechanics
3
What modifications are needed to have tree that can create hurricane/cyclone around it?
5
Why would a tree species grow very large in what is a very windy environment?
6
How much water could the Crown Chalice hold as it grows on high-up tree branches?
2
How would a "Tesla tree" work?
16
How plausible would apple-sized raspberries be?