I’m designing a human Bronze Age civilization on a world with only ⅓ of Earth’s gravity. This reduced gravity will allow humans to jump much higher than they could on Earth. It will also allow humans to climb much further and much faster given their reduced weight. This seems to me like it would render common fortification techniques, in particular walls, less effective.

How might walls be modified to account for humans' enhanced vertical mobility or how might other methods be employed instead? What will low-tech defensive fortifications intended to keep people out look like on a low-gravity world?

EDIT: To address concerns that humans of this world will be significantly weaker than humans on Earth due to the reduced gravity let us assume that the attackers of this world engage in various labors that give them comparable strength to humans as we know them. These humans did not evolve on this world. They are from Earth and now live on the low-gravity world and so still have the same capacity for strength as humans today.

1/3 gravity will enable humans to jump higher, but nothing absurd. For example on earth if you jump at 2m/s then you will have a jump time of:

Using this we can calculate the jump height by:

So slightly higher, but not enough to count. What this will do is make it easier to build fortifications. Stones that weighed many tons, now weigh a 1/3 of that and are much easier to manage. A crew of dozens can erect stone structures that would take hundreds on earth and even on this world stone is stone, and similarly hard to get through.

The ultimate effect of this will be tall stone structures everywhere to keep invaders out, instead of traditional wooden palisades. Which will be quite necessary considering the fact that catapults and other siege weapons will be able to throw stones 3 times as far! Archers will be of no use against enemy soldiers with these weapons as they can now fling stones from so far away that they are almost impossible for the archers to hit with any accuracy.

Climbing in 1/3 gravity will be interesting. A small indent in a wall that would be not much help in 1 gravity will be plenty to cling onto a wall at 1/3. You come to an ordinary brick wall such is common on Earth, with little indents between the bricks because the mortar isn't spread right to the edge. Possibly you need some kind of gadget to cling properly, but you can go up that wall fairly easily.

A wall isn't much help if the opposition can just climb over it, walk over to a door, and let in all their buddies. So walls would need anti-climbing character.

Walls would need to be a lot smoother than typically built now. They would also probably feature anti-climbing barriers. So the wall is high enough to discourage straight jumping. And there's an overhang to make climbing very difficult. And there are arrow slits in the bottom of the overhang to allow defenders to attack possible climbers. 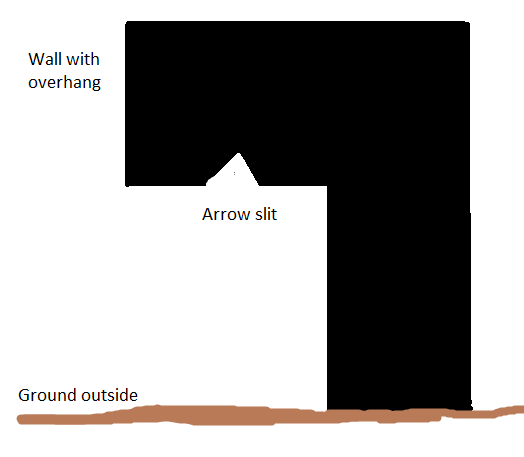 Moats would need to be correspondingly wider.

Ranged weapons might be more annoying because they will have longer range.

A catapult might well be able to locate somewhere with really good cover and fling stones 3 or 4 km. More? Not sure how far catapults can fire on Earth. Accuracy might suffer. But they would be able to fling much bigger stones. So even a near miss does a lot of damage. Castles often expended a lot of effort preparing the ground nearby to make just such attacks difficult. They would need to go out much farther from the castle in this effort.

Flaming arrows might be fired much longer distances. So they would need to be well prepared for this. Either make exposed parts of the castle out of stone, including the roof. Or they'd need to have fire fighting preparation.

Depending on the air pressure, human powered flight might well be possible. So some of Leonardo's designs might well have worked with medieval materials and construction methods. So a hill nearby might be a place to launch a bunch of guys on hang gliders or some such, even with light armor. Maybe fly right over the wall. So the castle would need some kind of way to deal with this. Maybe things like nets and spikes and such on the roof to discourage flying attacks. And the castle better be on the highest chunk of ground in the area.

Flying then becomes a two way thing, with recon missions. And fake groups of attackers set up to try to fool the airborne recon. And possibly even sorties from the castle based on gliders. Oh, and launch ramps around the top of the wall, and possibly specific areas inside the castle for flyers to return. And the ever present wind sock instead of a flag.

Possibly a ride on a catapult is survivable at 1/3 g. Imagine 10 guys in the bucket of each of 10 catapults. And they each have a parachute of some kind. Suddenly the sky over the castle is jam packed with enemy soldiers. You would want to be ready with a variety of bow-and-arrow and such. And ready to repel an attack of guys who just literally fell from the sky.

At least in Europe, the prevailing bronze age fortification was the hillfort. Walls as you are likely imagining them were not very common at all. The purpose of these fortifications was not to make it impossible for invaders to get in, but rather to make it difficult for them to scramble up and to leave them tired by the end of it.

The objective is to make sure you're standing on solid ground, but your enemy is tired and standing on uneven, possibly muddy ground, giving you a significant advantage.

If this is the type of fortification you're using, it will be almost as effective as it was on earth, except the enemy probably won't be as tired by the time they get to the top.

Gravity affects in the same projectiles and buildings.

If a human can throw a spear or jump 3 times higher, the same human can build a wall or a fortification 3 time taller, to get protection from the said spear/intruder.

All the rest being the same, the max height of a structure depends on the load, and this is given by its weight. Less weight means more height.

All in all, fortification will be as effective as they were in hour Bronze age.

How high a human can jump in lower gravity is rather complex.

Assuming, as a first-order approximation, that the upward speed when leaving the ground is the same as in normal gravity, you can jump three times as high. But what does that mean? Good high jumpers on Earth can clear a 2 m bar, but they do that more or less lying down, with their centres of mass very low over the bar. Their centres of mass when leaving the ground is roughly 1 m above the ground, so the centre of gravity is only lifted about 1 m. This is what we will have to triple when gravity is one-third normal. A high jumper on this planet will thus be able to clear a 4 meter bar.

However, there' more to it: The assumption of having the same jump speed as on Earth is too simplistic. A high jumper fights gravity when flexing muscles to achieve jump speed, so the force provided by the legs is a combination of the force needed to counteract gravity and the force that provides the upward speed. On Earth, the force needed to counteract gravity is 10 m/s/s, and the acceleration to reach the speed required to lift the centre of 1 m is another 20 m/s/s, assuming that the acceleration of the body centre of mass is done over half a meter (crouching to standing), for a total of 30 m/s/s. If only 3.33 m/s/s is needed to counteract gravity, there will be 26.67 m/s/s left to actually accelerate the body upwards, for a jump speed of 4 m/s. In one-third gravity, this is enough to lift the centre of mass 4 m, meaning that a good high jumper can clear a 5 m bar.

To clear a wall, you just need to be able to get your hands on the top of the wall and swing yourself over, which adds another meter to how tall the wall must be to prevent people from jump-and-swing over it. Walls hence must be at least 6 meters tall to prevent easy access by jumping.

This, of course, assumes that the jumper isn't wearing heavy gear, but a sword and light armor doesn't add all that much to the weight of a person and hence doesn't change the equation all that much, either.

Pole vaulting, however, would add more meters to how high you can jump. Since pole vaulting relies on turning the kinetic energy of your running speed into potential enery, the energy provided by pole will remain unchanged with lower gravity, assuming you can run just as fast as on Earth. That energy would however propel your body three times as high. Record pole vaulters can clear 6 meters, hence lifting the centre of mass 5 meters. By pole vaulting, a soldier on your planet could hence feasibly clear a 16 m wall; possibly a bit more, since the lower gravity might allow faster running. Coming down the other side might hurt, though as there is unlikely to be a thick, soft mat there, and it corresponds to falling roughly two stories on Earth. If you can land on the top of the wall, there will be no problem, though, so to be safe, defenders should probably build their walls at least 20 m high.

Not the answer you're looking for? Browse other questions tagged gravity military-defense bronze-age .

8
What effects would moving between areas of different gravity have on a human?
15
Could a robotic exoskeleton give humans Earth like movements on a high gravity planet?
12
What are the consequences of using limited anti-gravity for steampunk-style airships?
1
How would fast rotation affect gravity?
17
Would trams be workable on a low-gravity world?
5
How would lower gravity influence Bronze Age projectile weaponry?
1
The Effects of gravity on humans and animals on a world 4x the size of Earth
6
Most effective castle fortifications against fantasy/medieval airborne attack?
3
Metallurgy at different gravity strengths