The people in my story's universe all have various magical powers, and if they want the effects of these powers to extend to their clothes or equipment, said equipment needs to be designed to a few specifications in order to comply with my world's method of "syncing" objects to their owners' aura, an invisible field that extends 3 inches out from every part of their body:

The major takeaway from this is that if you want to be able to use certain types of magic properly, your weapon needs to be designed with as few pieces as possible, or, bare minimum, have all of the pieces be constantly within 3 inches of some part of your body while in use.

Now, this is pretty easy when it comes to swords, and not even out of line with how swords are already made. The blade, pommel, grip and guard all have at least some part of them that is within 3 inches of the user's hand at all times when in use. But when it comes to things like lances or halberds, there are going to need to be some major changes to their designs.

Real-life polearms were typically made with wooden hafts that then had the metal blade/point attached to the tip of them. This obviously means that the blade component of a normal polearm is too far away from the user's hand (or any other part of their body) for their aura to reach it. Ideally (at least for the purposes of use with magic and nothing else) a polearm, both the haft and the blade, would be made out of one uninterrupted piece of shaped metal.

But 1, this would limit the length of the polearm to roughly the user's height (see rule 1), and 2, my understanding is that polearms were designed the way they were because wood is both lighter and cheaper than metal, making a wooden-hafted polearm significantly more cost and energy efficient than one that was a single, long, solid piece of forged metal. But we're talking about being able to carry it with you when you do things like teleporting and walking through walls, so obviously some sacrifices to the ideal design would be worthwhile to take advantage of this. The only question is what those sacrifices would look like.

What is the best way to design a polearm for magic compatibility while making the fewest compromises to the advantages of the ideal real-life design?

Real polearms often had langets, or strips of metal attached to the head that extended a significant length of the pole. This made it hard to simply snap the pole off and made the whole thing much sturdier. The small amount of added weight was well worth the better strength. If your mages are going to invest in a polearm they will have langets, not just a socketed shaft. If they need a metal connection to work smiths will make such pole arms with tapered langets that extend the length to the weapon. They can be thinner and lighter than normal langets especially past a certain point since they are less to add strength and more to supply a connection. The lower part of the langet could even just be wire. You can even go further and weld the rivets on one side, so there are only two pieces to the entire thing: one metal and one wood. This will weigh the same as a normal usable polearm. Fitting will be a little bit of a pain but well within a decent weaponsmith's capabilities. As a bonus this works for any hafted weapon, so they can do it to axes and hammers too. 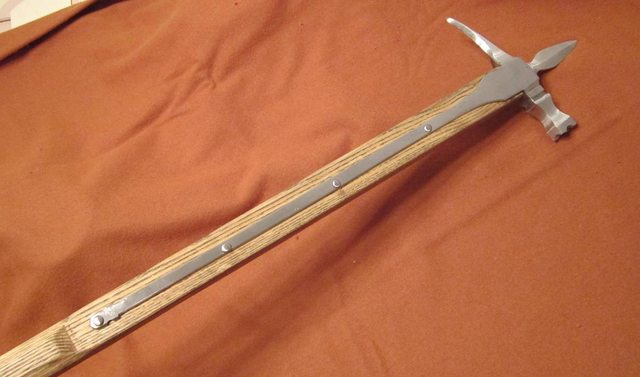 With the above design you can have a polearm which is longer than the bearer height, and yet to charge it, just wrap the unmounted cylinders, joints and wire around the body.

During charging they will count as multiple, individual objects. During usage there will by physical continuity among the components. Moreover, for added security, one end of the wire can be make touching the handle, again in contact with the aura.

When it is mounted, part of it will be in touch with the bearer hand, thus within the aura.

Multipart lances are a thing. 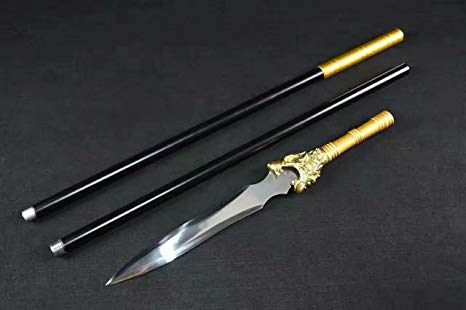 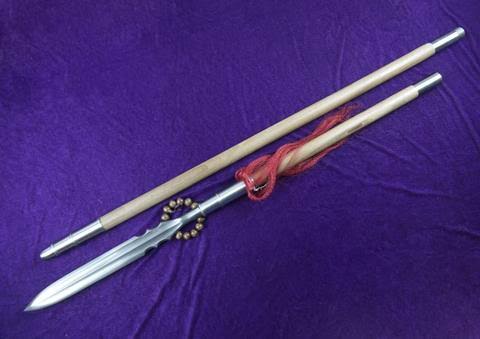 I think the images should be self-descriptive. Imprint on the parts, then assemble the whole. You can switch the tip for some blade of your liking.

Or make your aura bigger and enchant a single part pole weapon. Some mystical traditions on real Earth have aura enlargement training.

This might be a little out of the box, so let me know if it breaks any other concepts.

What about syncing materials and then crafting with them?

I think that could actually be pretty cool if you're talking about syncing being a more personal experience. Although some items are small enough to sync post-creation, there may be others that must have their materials synced due to being too large.

You said that an aura extends 3 inches out, but I'm also going to assume that the whole item needs to be enveloped in order to sync properly. Or else, it would be just a matter of holding the item for long enough in the first place.

If you can sync materials before crafting them, you can make larger synced assemblies. Of course, that might take a lot more work, but adds a bit to the charm of the personalized aura sync, I think.

It depends on the purpose of the polearm. Longer polearms are actually harder to use in one-on-one combat. Pretty much outside of 1.5 your body length and you might have difficulties with it outside of horseback or a unit formation.

For the purpose of magic, I think the condition would void most of the polearms, axes, hammers, bow and some of the wooden weapons like wooden staff with metal tips.

There are no realistic way to do it because even a full length polearm made with a thin tube of metal with wood underneath would require some form of riveting or screws to keep the heavy duty tip on the stick.

6
Magic on an atomic level?
7
Reimagined Weaponry: The Illidari Warglaives
8
Weapon design: a conceivable superheated sword capable of cutting through most things
10
Double-checking my world's rules for making magic extend to clothes
9
How to operate telekinesis and a kinetic shield using science-based 'magic'
5
Can Magic Enhance the use of 19th Century Firearms?
49
Help! Mage stuck inside a wall!
1
How could making a soul more demonically compatible lead to a reversal in demonic possession?