What would be the “cheapest” non-rocket solution to getting cargo to and from Earth's surface?

Prometheus, your friendly neighborhood mega corp, has done it: dragged that pesky asteroid near Earth's orbit. Now with a rich source of ore right in Earth's orbit Prometheus is looking to improve its surface to orbital infrastructure.

Prometheus for the past decades have been out phasing the old "rocket ships" of the frontier with newer cargo vessels (nuclear powered space craft). Surface to Orbital transportation is the final sector still dominated by the rocket.

What infrastructure would allow Prometheus to mainly (you'd still have cases of rockets where it makes more sense) out phase rockets? The only requirements are two things: not a fancy rocket and near future preferably.

Note: SSTO (single staged to orbit) are allowed as long as they, well don't look like a plane with a rocket strapped under it

I'm not too worried about a not rocket solution being "inefficient" or requiring construction on a grand scale, that's Prometheus' strong suit after all.

Why an orbital ring?

In summary an orbital ring is a space elevator for grown-ups and allows the kind of logistical endeavours a true solar system spanning civilisation would face daily better than any other launch asssist concept. Space elevators have a terrible throughput of only about 15 t/week according to recent papers and only bring one up to geostationary orbit with a litte push allowing one to bring out stuff to the asteroid belt on a slow transfer orbit. If you want to launch a 150 t space craft it would take 10 weeks to do so. Most other launch assist concepts face similar issues and are inferior to the orbital ring in most points but construction cost and energy demand (this will become irrelevant quickly as the energy cost is mostly upfront and the ring is a great base for off-world solar, Helium-3 or fissile material import). In terms of scalability, throughput, interplanetary launch assist and general utility no other launch assist method can rival the ring. With that out of the way...

Crucial to an orbital ring is the concept of active support. Whenever you build a structure you want it to stay stable. Buildings do this by relying on passive support, i.e. their own structure can carry their weight. This approach is limited by the ability of the building materials to resist the force the rest of the structure exerts on them. This is Newtons third law, actio = reactio. Actio is the force the structures weight delivers and reactio is usually the force the material must be able to muster. Yet nowhere it is said that reactio must be provided passively. Imagine a friend of yours is walking over a thin plank, which would break under his weight. The passive support of the plank isn't sufficient to counteract the force your friend exerts. Now you go under the plank and push it up, so that it can hold your friends weight. You are providing active support. The great thing about active support is that you aren't limited by puny compressive or tensile strength, you are dumping energy into the system to keep it stable. And you can dump infinite ammounts of energy into a system.

Secondly some basic orbital mechanics are important for the ring. An object moves through space on an elliptical trajectory corresponding to it's speed. The faster the object moves (i.e. the more energy it carries) the higher it will move. If the object is restrained from moving into a higher orbit appropriate for it's speed it will exert a upward force on the restraint.

Constitution of the Ring

Now imagine bringing a stream of orbiting, magnetic slugs in a circular orbit arround earth, lets say 200 km high. They will move at orbital velocity. Arround each slug we have a a metal ring containing electromagnets. The rings are loosely connected and under power. They too move at the same orbital speed as the slugs. Then we activate the magnets, forcing the slugs to move though the center of each ring.

Finally we start decelerating the rings with their magnets. This will transfer their momentum to the slugs speeding them up. The now faster slugs want to move to a orbit higher than their current 200 km. The now slower rings want to move to a lower orbit. But the magnets force both to interact. To be precise the rings want to fall down with the same force the slugs want to go up. Like on the plank with your friend, the situation is stable and the structure stays in place. We continue this until the outer structure sits statically over the earth. The rings, also called stator, sit fixed 200 km over the earth and levitate magnetically over the slugs, also called rotator, which keep the structure in the sky.

At this point you can drop tethers down from the ring to ancor it and to install elevators. One of the rings many advantages is that normal nylon ropes will work for this and that no fancy carbon nanotubes are required. You can send tethers down to everywhere within a ca 500 km distance from the ring.

On top of the ring you install several maglev rails. Since the ring spans arround the planet and the velocity an object can achieve on a mass driver is given by this formula.

As the track is circular, $d$ can be considered to be infinite, thus setting the theoretical limit of $v$ to $c$.

The best thing is, that this subverts the Tyranny of the Rocket Equation and allows for practically free transfer of goods between two planets with orbital rings. Just strap some ion drives on the cargo pods to allow the to adjust their Brachistochrone trajectories to correct for the orbital inclination differences. Regenerative breaking will make this more efficient than any rocket.

This video will give you some more insights and this paper deals with the construction of the ring base. As soon as such a base has been established the ring can be expanded at an extremly low cost. While the ring can be constructed with current day technology, high or even room temperature superconductors would be nice to have. 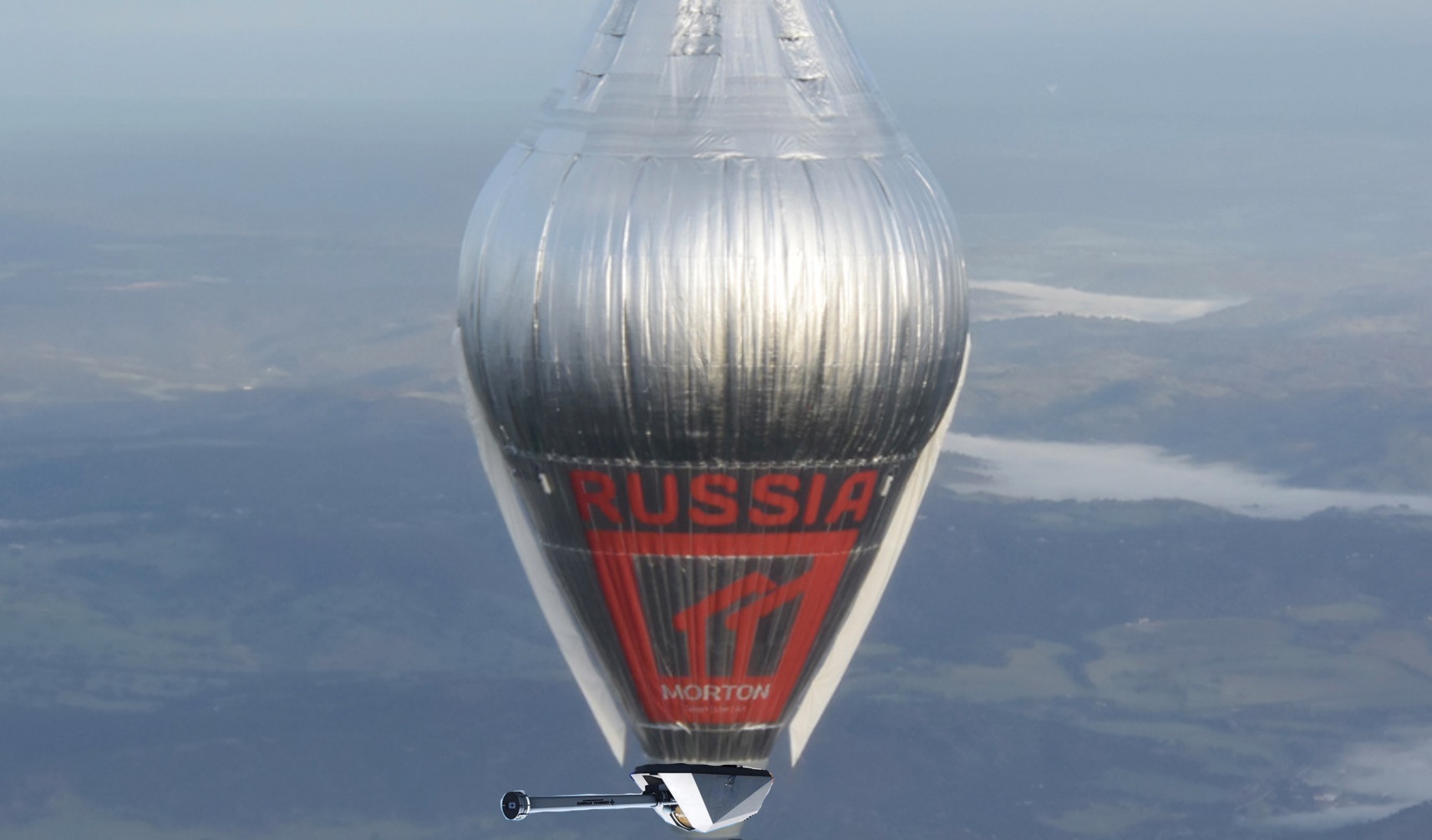 Getting stuff in orbit means getting it high off the ground and also getting it moving sideways fast enough that when it tries to fall back down to the earth, it misses.

A ship carries a supply of plastic or other material, probably hard and external, that is vaporised by a groundside LASER turret in a controlled manner, producing thrust. While this requires significant power, all the power generation can be situated groundside, and thus doesn't need to be expensively pushed to orbit with the rest of the ship.

Bonus points: the turret can be repurposed for a combat role by a government or terrorists if your plot calls for it.

It's unclear how far in the future it is. On Earth, it's a considerable challenge. On other places, like the Moon or Mars its much more feasible. Experience from building it there, could boost an Earth Elevator.

A mega corp would definitely invest considerable resources into researching and building it. Though its questionable if a single mega corp would have the capacity to build it.

Sadly, I'm not knowledgeable enough about this option, but I heard/read off a concept about massive lasers pushing payload up into space. It probably wouldn't worth as it would require astronomical energy investment. Especially the further it is from the ground.

Even less sure, if this is possible. Basing it on an idea from a sci-fi book. A massive asteroid in stabil orbit, with a long hook lowered into the atmosphere. Not good enough for the elevator, but good enough to catch a payload which only has thrust to reach that height. I'm not sure if it would be useful, as the most energy are used for takeoff.

Getting cargo to the surface is easy, drop it. Works really good for metals mined from the asteroid. Box it up in steel, add transponders and guidance and maneuvering thrusters and toss it down the gravity well. Admittedly, not a great way for eggs or people travel if you want them resembling eggs and people later.

Up is a matter of Work and Delta-V, boils down to the same thing. Magnetic accelerators on high mountains could conceptually throw heavy masses into orbit. And the longer the accelerator the lower the acceleration and the more comfortable for transporting eggs and people into space and having them still whole when they disembark at the asteroid.

Another way is similar but its a giant cannon. It fires big hollow bullets straight out of the atmosphere. Using multiple propellant stages to keep acceleration constant, it has same kind of behavior as magnetic acceleration.

JP Aerospace has been testing scale models for a while now.

Their plan is to use a large airship to carry cargo to a "dark sky station" that floats in the upper bounds of the atmosphere. From there, the cargo is transferred to the ATO which is an aerodynamic airship that spins out of the atmosphere. The faster it goes, the more lift it gets so the higher it can go. the higher it goes, the faster it can get.

The founder of the company believes that he can get enough delta-v to reach Mars. Conveniently, Mars' ground level atnosphereic pressure is the same pressure that the dark sky station will be in over Earth (I don't think he's worked out what to do with surface winds yet).

The trip won't be fast but it will be cheap and will be able to take fragile things like people up.

Just a really big gun with a long barrel. You wouldn't want to send up anything delicate. But bulk items can be sent into LEO (Low Earth Orbit) fast and cheaply.

Not the answer you're looking for? Browse other questions tagged near-future transportation or ask your own question.

11
To build a space elevator
12
In order to successfully have 3 orbital rings around a planet how do you have to orient them?
1
Cargo-cannon delivery system from Earth to Moon?
5
How can I escape from a planet like Mars without any modern technological tools such as a rocket?

2
What measures to regulate/detect/stop criminal use of lethal and stun weapons would be viable and accepted by the public in the near future?
27
What would be the most extreme form of a surveillance state? And what would living/working in it look like?
4
How to extract an object from 200 miles below the surface of the planet Mercury?
4
What is the cheapest way to move large amounts of trade goods to orbit?
6
What modes of transportation and vehicles would humans with echolocation and no sight produce?
5
What is the most energy efficient mode of travel by a land animal on a terrestrial planet with 0.1g at surface?
9
What factors would limit the size of an ancient wagon and how big could they get?
3
What level of technology can be expected from a society terrified of physical and wireless networks?