Are there examples of rowers who also fought?

In my world I plan to have a naval army with boats that are driven by manpower. The rowers are not slaves but are also soldiers. However, I am struggling to find examples of times in history where someone whose job it was to row a boat would also wear armor, march on land, and fight in battles.

Can you provide examples of armies or campaigns that had boats rowed by men who also marched on land and fought in battles?

If the Vikings had to row, everyone on the longship took their turn at an oar (though they sailed any time they could, because who wouldn't?) -- and when they went ashore to fight, everyone in the crew had a shield and weapon and armor comparable to what everyone else was wearing at the time -- helmet and hauberk, at a minimum.

Seems to have worked pretty well -- they raided and colonized successfully over a range from modern Belarus to Greenland and even Newfoundland, all of Europe accessible from the Atlantic, Baltic, and North Sea, and even (I've read) into the Mediterranean. It was a model that worked for them for almost four hundred years.

I found this all very surprising, the majority of the ancient world relied on free men as rowers of their ships. They'd also fight on rare occasions, but were considered very valuable since rowing the big ships with lots and lots of oars was a skill.

And, since ramming was a significant part of their tactics, the oarsmen fought from below decks propelling the boat.

The idea seemed to be given the number of men employed as rowers on a boat, that if slaves were used then you were handing them the means of escape.

For merchants moving cargo from port to port, the ship owners would lose their investment in humans as well as their investment in the ship's cargo if their slaves revolted and rowed away. Merchants adopted sails to power their vessels much sooner than warships. Presumably, they were cheaper to operated and didn't have the risk that the engine would run away with their property.

Similar circumstances apply to warships, you don't want divided loyalty on your oars.

It was apparently later in history that slaves and convicts were used to man galleys. 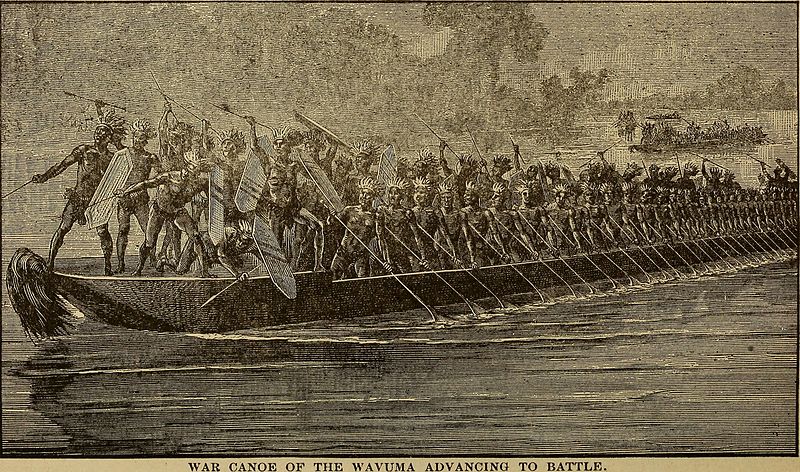 Depicted: a central African war canoe. War canoes were also used in North America and the Polynesias - in addition to paddles the Maoris also used sails on their giant canoes and used them to ram other canoes. I am 99% sure that anyone along on such an expedition would be expected to be able to perform all jobs.

I think these cultures all used paddles. Oars were definitely used in Europe and asia but I think they used paddles, not oars in the Americas, sub-Saharan Africa and Polynesia. It is a good question.

In ancient history, oared "pentekonters" ("50's")were essentially used like Viking longboats, with the oarsmen becoming soldiers (or technically Marines) once they hit the shoreline.

These were the sorts of ships the Mycenaeans used to sail to Troy in the Iliad, and during the real life Bronze Age.

During the Classical age the ship itself became a weapon, and only highly skilled professional oarsmen were capable of carrying out the complex evolutions of naval warfare of the period. Given the sheer number of oarsmen and the need to put the ship ashore at night and during inclement weather, it is extremely likely that a large portion of them acted as Marines to guard the ship, forage for food or act as raiding parties. There would be a portion of "real" Marines (Hoplites carried aboard) who would act as leaders or to stiffen the unarmoured rowers ashore.

Naval warfare changed pretty dramatically after the Classical period, with larger warships and larger portions of armoured Marines aboard (and ships also becoming larger to carry projectile weapons like catapults), making the contribution of rowers in combat much less likely.

After the end of the Classical era, the Vikings recreated the sort of naval raiding that the ancient Mycenaeans used thousands of years before.

The last real use of armed rowers was in the fleet of the Serenìsima Repùblica Vèneta, where the oarsmen were free and often expected to leave the oars and storm the enemy ships. The long projection on a Venetian galley was a boarding ramp. During the Battle of Lepanto the Venetian wing of the Christian fleet baked water and pivoted, driving the Ottoman wing against the shore. The Venetian wing then stormed ashore and slaughtered the beached Ottoman crews. 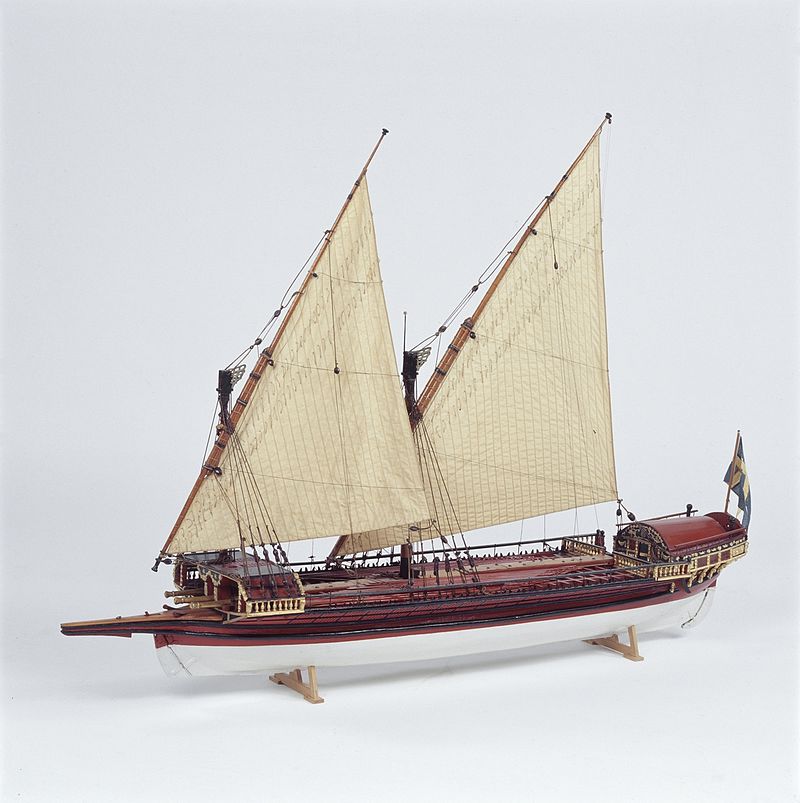 Venetian galley. While this model does not show the oars, there could be 144 oarsmen aboard ready to storm enemy ships

So the prerequisite is that the rowing crews must be free men, and a naval doctrine that requires the additional manpower of the rowers in order to successfully carry out combat. This also precludes the oarsmen from exiting the ship during naval combat outside of ramming and boarding, since it is far more advantageous to keep the ship as an active fighting platform.

As described in Wikipedia, galleys in the Ancient world were all rowed by free men. As a result, all of them would have been willing to fight. Galleys being rowed by slaves was a relatively recent innovation in the late Middle Ages.

Whether these men also fought on land as well as in sea battles is less likely. If rowers left their ships, the ships would be lost if the battle was lost, and the cost of a ship was very high. And in spite of their great strength, rowers would have no real chance to practise skills with weapons.

It's possible (like the Viking, Native American,..) but it wasn't widespread because it's quite impractical and risky ..

First, unless you have complete control of the sea, it will be very dangerous.. If an enemy fleet appears, your undermanned ships will be gone - they can't even run away since they don't have enough rowers.. Warships are very expensive, and you won't want to see all that money sink beneath the waves (or worse, fall into enemy hand). Not to mention all the marines you just stranded in hostile territory, without food or reinforcement..

Secondly, even if it's safe, a navy still has more use than acting as a single-use troop transport.. One of the most important functions of a navy is logistics - either carry the supply/troop themselves, escort the ship carry the supply, or try to stop the enemy doing the same.. Many empire (like the Roman) looked down on navy, since it was just there to support the "real" armed force.. that why many examples given here (Viking, war canoes) are mostly used for raid or small-scale conflicts, where logistics (and even naval battle) is not a big concern..

So what to do then? Most of the time, just ferry your actual land army to do the fighting inland, while your ships make sure these soldiers are well-fed and, in the worse case, have a mean to retreat.. Some galleys also have their own marines; however, due to their limited number (mostly just a few dozen per ship), they were mostly used as support during amphibious landing.. Rowers rarely fight, even at sea; and if they do, it's mostly because their ship was boarded.

There are a number of examples in Thucydides' "History of the Peleponnesian War" of sailors being armed and fighting alongside the regular soldiery. Since the ships of the time relied on multiple banks of oars to power them in combat this probably extended to the rowers as well (though to my recollection he does not explicitly mention them). It seemed to me pretty clear that it was an exception rather than the rule though.

Not the answer you're looking for? Browse other questions tagged reality-check military history .

48
Are there any real world examples of where a desert and a swamp meet each other?
26
Infantry weapons, or why are there people running around down there anyway?
8
Are there currents in space? Space flotsam?
2
What are some real world examples of mental impairment i can use for my magic system?
4
Does this half-armor make sense in this context?
11
Are there any advantages to bioengineered submarines?
26
Are dragons useless when there are guns?