How can I make the Solar System uninhabitable?

For the Universe I am creating humanity has devolved into groups of scattered tribes. This is due to the fact that we ran afoul of a really nasty alien race, who decided to leave us homeless. A coalition of races had banded together to fight this menace, but mankind ended up with the short end of the stick. It is the Great Diaspora, and we are only hanging on by our fingernails.

The problem I am having is how to thoroughly destroy or at the very least render uninhabitable the places Man once called home. If it were only Earth it would be a simple enough matter, but by the time the attack takes place he also has colonies on Luna, Mars, Ceres, Callisto, and Titan. How can I muck them up badly enough that we have to now seek a Promised Land elsewhere?

Ceres I figure is small enough it could just be reduced to rubble, but what about Luna? If you destroy the colony there, what would prevent them from setting up new ones a few hundred miles away?

At the moment all I can think of is a "Gray Goo" weapon, short of blasting multiple planets and moons to smithereens. I am hoping there is another option out there I haven't considered.

EDIT: I'd like to hold onto the Sun. You know, sentimental reasons. :)

Let's turn our thinking around. Instead of asking, "how could alien attacks send humanity into a diaspora?" we can ask, "what would aliens do if they wanted to scatter humanity like this?" Say, for instance, the aliens don't want to permanently ruin the worlds that the humans have colonized (because those worlds could be used by the aliens down the line), but they want to keep the humans off of them for a while.

I've come up with a machine that could do the trick. It's a massive, self-powered vehicle the aliens have developed, which burrows into a world's surface once it lands on the least-defended area of the planet. Once deep in the planet's mantle, it sends out extremely powerful EM pulses constantly, which disrupt electronics all over the planet but dissipate harmlessly at larger ranges.

Any human habitats on the planet will immediately lose life support and become uninhabitable, forcing an evacuation or worse. The humans can't just move to another location on the planet, because these EM pulses don't stop. Perhaps with some ingenuity, they could build Faraday-cage-enclosed habitats, but it would be dangerous setting that up in the first place while that machine is still running, given that all of humanity's habitat-building tools are themselves electronic.

But couldn't the humans just destroy the device, you ask? Well, sure, maybe they could get a high-power enough laser from far away enough in space to vaporize a hole all the way down and destroy it, or something like that. But that takes a lot of time and a lot of resources. Maybe some governments were working on just such a solution, and the aliens eradicated them before they could finish.

These planet-wide EM-producing digging machines are, of course, very expensive for the aliens as well, so it makes sense that they only sent them against the main human settlements, and have spared the scattered outposts.

Simply put you throw rocks at stuff you don't like.

Fortunately our solar system is full of rocks just waiting around doing nothing, so we just grab a few (OK, more than a few) and direct them gently at the source of the problems (any inhabitable place) and wait for nature (and gravity) to takes it course.

In the due course of time you can not only wipe out all life, but ensure it won't be producing or supporting any life for millions of years.

How to reduce things to rubble easily

Relativistic kill missiles are your best bet for thoroughly destroying inhabitable places in the solar system (which is technically every one of the nine planets and most of the dwarf planets, given enough technology) is to use relativistic kill missiles; the aliens could just send kilometer long projectiles moving at a decent percentage of the speed of light, which, on impact, would convert matter into energy at an efficiency possibly better than even matter-antimatter annihilation (which loses matter-energy efficiency by radiating out neutrinos).

A relativistic kill missile need not have any explosives, because its mass is all it needs, along with some thrusters, which can use fusion reactors, or pushing lasers, to accelerate to well over 50% the speed of light. Just a few teratons of iron or some other dense material, the procurement of which would be child's play to any K2 or above civilization (I'm assuming these aliens aren't from our solar system), would be needed to build the missile; and, when it hits its target at a decent fraction of the speed of light, can bake even a planet and render it uninhabitable. The K-pg impactor caused a mass extinction, but was moving nowhere near the speed of light. A larger asteroid, or one moving a lot faster, could have rendered the planet uninhabitable. And that's what a relativistic kill missile could do.

The answers all suggest multiple plausible ways to render the Solar System uninhabitable, but suffer from some flaws, such as requiring a long time frame to work, or require a great deal of resources.

I will refine the process and suggest the aliens simply have to fire one RKKV (Relativistic Kinetic Kill Vehicle) into the Sun. Striking the sun with that amount of energy and using the extreme speed of the RKKV to deliver the energy deep into the Sun, many processes will be disrupted and the Sun will likely emit massive flares and other radiation events which will scour life from all exposed surfaces. Since the Sun will be unstable for years, there is really no hunkering down and waiting to fix the blasted surface installations, especially since we are talking about the sorts of flare events which would strip large portions of the atmosphere from the inner planets. Larry Niven's short story "Inconstant Moon" describes what such a scenario would look like from Earth. 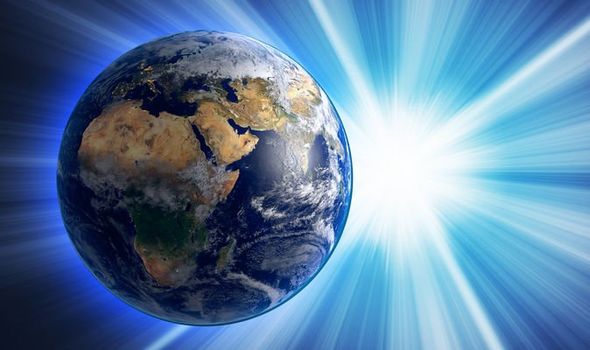 This story raises the question: How would you spend your last night on Earth? When the Moon suddenly starts shining brighter, Stan and Leslie realize the sun must have gone nova and they only have a few hours until the Earth rotates into the deadly sunshine. This story won a Hugo Award and was made into an episode of The Outer Limits.

As a possible bonus, after the flares settle down, the Sun may also go into a Maunder minimum, producing less energy and making any sort of biological or industrial recovery even more difficult.

Even K2 civilizations have limits, so being able to deal with the opposition using only one RKKV is much more efficient than trying to strike every planet, moon and free flying object in the Solar System.

The enemy race drops a 3d printer/mobile factory on an asteroid. It starts building more of itself, and creates swarms of drones. It keeps doing this. Eventually there are so many drones you can't have a civilization anymore, either because enough of the mass of the solar system is converted into drones, or you give up and leave and the factories go into hibernation mode.

A small stream of strangelets in a series of flyby trajectories around the sun will do the trick. As long as the sun is not touched, it is safe. Everything else becomes lethal to the touch.

Since the ΔV from even Mercury to the Sun is immorally huge, the sun should be safe. Add to that, solar wind pushes stuff away from it... Over millenia other stars around the sun will be disassembled, but the Sun will be fine.

As for the Earth, Moon, asteroids, comets... Each and every one of them will disintegrate. Wikipedia, for example, says this could happen if even one strangeled touched the Earth:

Your aliens could flood the moons, planets orbits with high intensity radiological materials. Fast Neutron radiation is very bad for humans and things like the magnetic field surrounding the Earth and Jovian moons won’t provide protection since neutrons have no electric charge and aren’t effected by magnetic flux lines.

So dusting the regions our habitats orbit through with isotopes of Californium would rain down deadly radiation.

And, depending on how much energy they have to work with, they could generate intensive E-M fields. Our natural protections like magnetic field will attenuate the E-M radiation, but at enough high intensity it will cook us like a hotdog in a microwave. Populations living in totally enclosed metal cages (faraday cages) would survive if the cages didn’t melt. And the biospheres would be wrecked.

And, biological attacks would be effective.

If humans had sealed colonies on hostile moons like Io, they might be protected against these attacks — except E-M since they’d qualify as faraday cages, or faraday cages in faraday cages.

And, then there is good old fashion sabotage. Infiltrate and overload the reactor or poison `water supply.

I'm going to take a simplistic shot at this, forgive me if I don't 'color inside the lines'. In the OP "uninhabitable" and "diaspora" made me think that a civilization capable of such destruction would also likely have no issues with Biological weapons.
In the basic premise of the pathogen seen in films like "Alien: Covenant", I suggest that a universally lethal-to-all virus/prion or other pathogen would fit the job.
As a self-replicating, incurable weapon...deploy once, then step back and wait.

So, to take a stab at this, destabilization of the oort cloud, millions upon billions of icy debris, with a vast number of objects over the size of 1km. A dead star swinging by the very edge of our system could easily dislodge of a few billion kilometer long pieces of ice. Just for good measure there could be ancient dormant prions, as mentioned in a previous post, that inhabit them. Fast forward a bit and you literally have an entire solar system getting pelted nonstop by large glaciers filled with deadly viruses/bacteria, or whatever you want them to be, quickly causing the entire solar system to go to shit.

This would take care of pretty much any base that's not heavily armored, even if it is, just chuck a few hundred abnormally large iceballs at it.

Lastly, for the long term, instead of rebuilding, just say that with the billions of asteroids that are being swept up, it'll be a few hundred years before its cleaned up enough to not have to worry about being on the surface of a planet. Either that or viruses.

Depending on what kind of technology your alien race has, you could use something with a very high mass to gravity slingshot the planets into the sun (or at least near it). I believe that vaporising a planet makes it uninhabitable.

Not the answer you're looking for? Browse other questions tagged science-based planets science-fiction weapons environment or ask your own question.