If all other things were the same, how different would the earth be if it took 4 of our years (365*4 days) to travel around the sun?

It's important to note that you can't just drop a planet in an orbit at an arbitrary distance from its sun, and expect things to just work. So, we will instead try to find the orbit that has an orbital period of four Earth years, and see what happens. If you don't care about the mathy and orbital-mechanicy stuff, then just scroll down for the TL;DR and answer.

Technically, you are looking to quadruple the sidereal orbital period of Earth, changing it from approximately 31,558,149 seconds to approximately 126,232,598 seconds (bear with me!), while leaving the masses of both the Sun and the Earth unchanged, and you are asking what effects such a change would have.

According to Kepler's Third Law, in the case of a small body orbiting a large central body (which is good enough for modelling the Earth in an orbit around the Sun), the orbital period can be calculated as $$ T = 2\pi{}\sqrt{\frac{a^3}{\mu{}}} $$ where $T$ is the orbital period in seconds (there we go), $a$ is the orbit's semi-major axis in km, and $\mu$ is the standard graviational parameter using the mass of the larger body which in our case works out to $1.32749351 \times 10^{11} \text{ km}^3 \text{ s}^{-2}$. Earth's orbit has a semi-major axis of 149,598,261 km (just about exactly 1 AU). In order to keep the calculations managable, I'm going to ignore the orbital eccentricity and just pretend that the Earth's orbit is perfectly circular; this simplification is unlikely to have any real effects on the outcome.

Let's plug in this semi-major axis, and see what orbital period comes out.

In effect, you'd be placing Earth in the middle of the asteroid belt.

That's hardly "leaving all other things the same" and just giving the orbit a gentle nudge.

Since sunlight intensity obeys the inverse-square law and consequently drops with the square of the distance, you're looking at $\frac{1}{2.52^2}$ or less than 1/6 the amount of sunlight compared to Earth's current orbit.

Even if we handwave away the asteroid belt itself, it seems safe to say that life on Earth would not take kindly to such a scenario, and it's probably a safe bet that Earth would quickly freeze over from the much lower solar input received.

You have a very tumultuous and changing (exciting) 'Earth' around another star, in both climate, weather, plant, and animal activity.

Temperatures - Seasons are now four times as long, so your temperatures will be more extreme. Very cold winters, and very hot summers. Long transitions between them.

Sea Level / Coasts - Your poles melt and freeze; If one of your poles accumulates significantly more ice, then that pole's summer, the sea level will rise significantly. The Antarctic has a lot more ice than the Arctic, so the southern summer will see sea level rises.

EDIT Rivers - Oh yeah, your rivers will likely freeze/go dry each year depending on size and location.

Oceans - You would have very dramatic global streams as very warm, shallow water surges towards the poles and cold, dense, deep waters return. This would make early seafaring much faster, but:

Storms - With incredible warming along the equator for half the year (each hemisphere's summer), bringing tremendous hurricanes. Also, in the extreme summers, very high equatorial pressure will push warm moist air into the low pressure zones in the north bringing more tumultuous weather.

Plants - Obviously adaptability to extreme temperatures will be stronger than what we see on our Earth; hardier trees and plants, longer germinating season for seeds. Your plants may evolve to have two types of growing seasons: a type of surface feature during the winters, and another during the summers - or maybe even four.

Animals - Most likely, this is highly nomadic for air, sea, and land dwellers (where possible), due to the extreme weather and lack of plants during the winter / abundance of plants during the certain seasons. Your lake & river dwellers will have to be ready for very hot or very cold (or both) temperatures. Because of extreme temperatures, your greatest variety of life will be those isolated (on islands or in lakes/rivers), where they have much different plants and climates.

There is a lot of activity going on here at Earthv2!

Well since the orbital period is dependent on the distance from the sun, we would be orbiting outside of Mars (1.9 years) though a bit closer than Jupiter (11.9 years), I'll leave someone else to do the math for the exact distance.

but looking at this 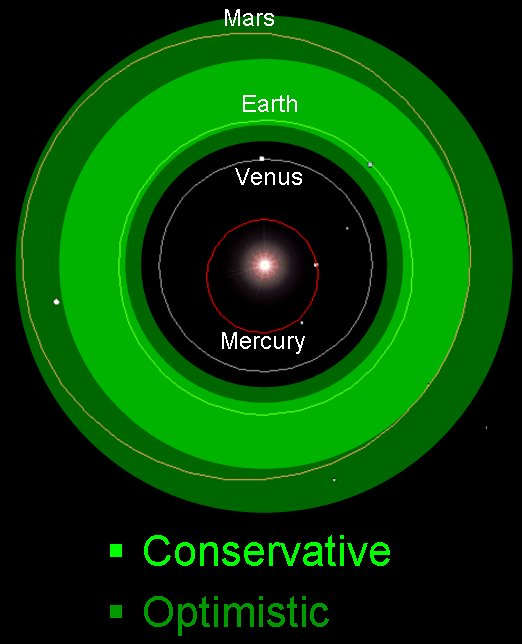 the planet would be outside of our sun's goldilock's zone. So in our solar system it would likely be a frozen ball. So we would need a larger/hotter sun to push the zone out farther or we would be dealing with a completely different type of life.

Whether that is all underwater which could be the case of Europa, a body that heats the water under the ice crust to keep it liquid, or a completely different type of chemistry that doesn't need liquid water.

I would also expect that should the sun provide a similar living conditions to earth, with similar declination of the poles, that the poles would have much more severe extremes, with a lot more migration of animals into and out of the regions for the seasons. I would also expect a much larger number of animals to be hibernators of some kind, to at least sleep through the worst few months of the long winter.

the farther north or south you go I would expect more grassland/tundra since it would be harder for perennial plants to survive the long harsh winters.

3
What would be the effects of an Earth-like planet with a longer year and longer lunar orbit?
6
What astronomical considerations are necessary for the planet in this model to possibly be Earth-like?
6
The (Alternative) Reason for the Seasons: Highly Eccentric Orbit
8
How can I find out the length of seasons and solar year on this planet?
7
Can a dual planet have an orbit around the Sun similar to Earth's?
2
What are the realistic problems of a planet orbiting too close to its sun?
9
A Planet Where The Four Seasons Occur Multiple Times In One Year?