Is there any reason an elevator, moving from the central hub to the outer ring, would not function on a rotating wheel space station with artificial gravity?

Any parameter of the radius or rotation rate of the station is fine. I don't have any particular G force in the outer ring in mind. Any level of G's that would be logical for "normal" human habitation on such a station would be fine. 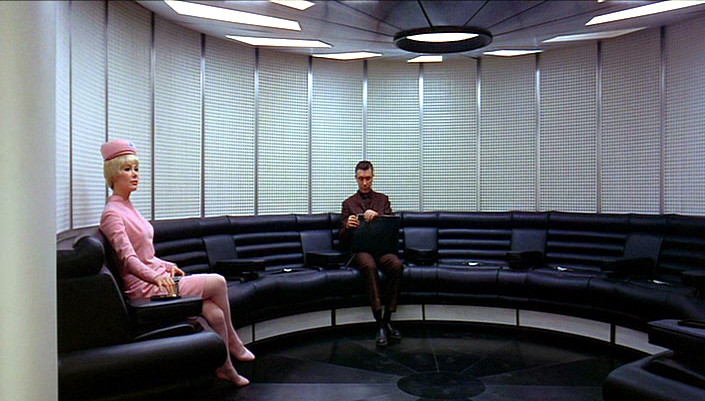 Is there anything wrong with this configuration, if the people on the elevator are sitting whether they start at the central hub or outer rim?

The simple answer is "no"

But there are consequences that must be considered to use the elevator safely.

So, how could you do this?

I'm imagining padded, fitted, well-strapped-in, keep-your-arms-and-legs-inside-the-ride-at-all-times seating that is electronically controlled to reorient the passenger as the elevator moves. Nobody gets hurt, and nobody gets sued. If you're the kind of person to hurl on roller coasters, this might not be the best way for you to travel.

But, then again, if you were such a person, what the heck are you doing in space in the first place?

Edit: You changed your question. It didn't quite invalidate my answer, but I need to add a comment.

Yes, there's a problem with that configuration

People moving from the rim ("down" in the photo) to the core are going to be slammed against the ceiling because they failed to rotate during the trip. Unless you're proposing the inside of the cab is separate from the outside, and spherical rather than cylindrical, so that the whole inner cab rotates.

And just in case you missed it in comments...

@Robyn pointed out that there is the angular force of the rotation to contend with. The angular rotation is greater near the core than the rim. You can use this calculator to figure that out. It's non-trivial (that rotten movie The Martian lied to me! And I like that movie A LOT!). So, vertical forces, horizontal forces... space sure isn't easy on the stomach.

No, unless the accelerations involved were really significant; in an elevator they aren't.

You don't want to ride the elevator all the way to the hub however, you'll want to have it start and stop at some distance, where there is an acceleration comparable with the elevator's own; otherwise you'll need for the elevator to be able to pivot and reorient itself so that "down" is always "towards the passenger's feet" through the acceleration, deceleration and travel phases.

If worse comes to worst, you'll need reorientable seats in the elevator equipped with safety belts or locking arms. That should be enough to tide you through the whatever.

When on the rim, the elevator cubicle is moving at a lateral speed equal to the rotational speed of the station's rim. As the cubicle ascends, it moves into altitudes where the rotational speed is smaller due to the shorter radius. The cubicle will be pressed against the wall in the direction of the rotation, and so will anything inside it, with greater force the higher the speed of ascent. Going down, the cublicle will be pressed against the opposite side as its lateral speed is accelerated by the elevator tube.

You can compensate for this coriolis force by tilting the cubicle as required to keep the force perpendicular to the floor. If the elevator is moving really fast, the g force on the occupants may be rather high, though. Automatically tilting the cubicle to have its floor perpendicular to the apparent gravity will also resolve any problems with going from zero gravity - the occuopants will initially be heads down compared to the rim floor. The rotation as the cubicle reverses may be a bit disorientating, though.

Not the answer you're looking for? Browse other questions tagged gravity space-constructs or ask your own question.