A common, matter-efficient, science-fiction habitat is a hollow cylinder or ring in space that is spun to simulate the pull of gravity on its interior surface. While for most purposes this artificial gravity acts just like what we are used to on Earth there will be observable differences between the Coriolis effects in the two rotating systems.

The Coriolis effects on the Earth deflect matter moving towards a pole (ascending) to the East (spinward) and matter moving towards the equator (descending) to the West (anti-spinward). One of the most notable consequences of this effect is the formation of cyclones. The Coriolis effect deflects winds into a circle around a low-pressure zone resulting in incredibly powerful storm systems.

On a rotating habitat, the largest Coriolis effects would be observed vertically (from the perspective of someone in the habitat). On Earth, this vertical component of the Coriolis effect is called the Eotvos effect but isn’t strong enough to overcome other vertical forces such as gravity and pressure. In our rotating habitat, the vertical Coriolis effect or Eotvos effect should be noticeably stronger and will also deflect moving air into cycles. Air moving spinward is deflected down. Air moving down is deflected anti-spinward. Air moving anti-spinward is deflected up. Air moving up is deflected spinward. This could create a wind cycle just like the ones on Earth that result in cyclones except these cyclones would be turned to stand on their edge. These vertical cyclones would spin in the opposite direction that the habitat spins.

I want to know whether it is possible for such vertical cyclones to form in a rotating habitat.

There are several distinct differences between our Earthly cyclones and these proposed vertical cyclones that jeopardize their existence in my mind. The main problem I see is that a vertical cycle will go through significant changes in pressure between high altitude and low altitude. Will this disrupt the cycle?

What other factors might make these vertical cyclones unrealistic?

Assuming the feasibility is dependent on the specific dimensions of the habitat here are the relevant characteristics of a torus that I have in mind:

Assume any other aspects of the world such as atmospheric pressure or composition are close to Earth's.

Other important innformation about the habitat, summarised from a previous question: A self eclipsing orbital ring:

The habitat orbits around a sun with the axis of rotation of the ring being perpendicular to its orbital plane. The upper half of the ring is transparent so it is fully naturally lit. The ring maintains the same absolute orientation during its year which causes interesting seasons as well as 2 eclipses every year where one side of the ring eclipses the other.

I think there is a very serious problem with the practicality of your environment. If I understand your description, you have a torus with major radius 10,000 km and minor radius 200 km, spinning fast enough to produce approximately 1/3g centrifugal 'gravity' within the volume of the torus.

But then you want approximately 1 atmosphere pressure inside the torus. The atmosphere will be driven to the outer radius of the torus in the in the same way as our atmosphere is attracted to the surface by earth's gravity. This will result in a pressure differential with height similar to that seen on our atmosphere.

Using the barometric formula for a surface pressure of 100 kPa (1 atmosphere), a gravitational constant of g/3, and a thermally equilibrated temperature of 290 Kelvin (23 C or 73 F), the approximate pressure as a function of altitude will be P(h) ~ 100,000*exp(-0.000035h) kPa. As a result, your atmospheric pressure will drop to about half an atmosphere at an altitude of ~20 km, and will be lower than that at the top of Everest by the time you are about 30 km up.

This means that most of your toroidal volume will be empty unlivable vacuum. See picture below for scale.

The 'good' news is that over the practical depth of the atmosphere, the variation in radial velocity is only around 15-20 m/s. That should be sufficient to produce some weather and wind resulting from Coriolis forces acting on convective motion of air within the atmosphere, but probably not enough to produce deadly storms etc. 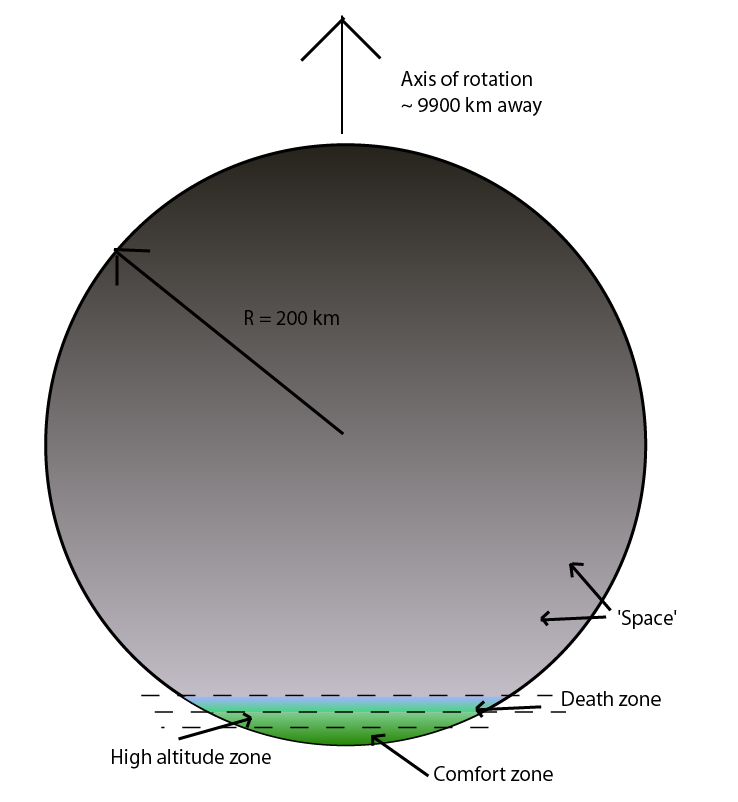 As pointed out by @Ash in a comment the Hadley Cells are air circulation effect that needs to be in mind and take a huge part in cyclons and hurricanes.

Basically hurricanes are formed by differences in pressure and temperature between different air flows. I don't see how in your scenario the air flow can be heated differently to form a cyclon.

Sure if the air moves inside your hollow cylinder it would be forced by the coriolis and the eotvos effect to change direction but why would it move in the first place?

tl;dr; No such thing as hurricanes inside the tube if it's heated evenly

This site provides a great explanation of the Coriolis Effect. It is primarily caused by a difference in the distance from the surface to the axis of the earth between the equator and the latitudes to the north and south.

You will have a pretty powerful Coriolis effect. The difference in the velocity of the air in the top/bottom of the torus and the outer edge would be $6$ kilometers per minute. Translated into hours, this is $360$ kilometers per hour.

$360$ kilometers per hour is $223.694$ miles per hour. According to Wikipedia, the people on the edges of the cyclone would experience the following.

I do not think so. Earth has an open atmosphere where gases are exposed to space, and your torus would have all the atmosphere contained. Additionally, if the temperature were stable between the center and the edge of the tube, then there would be no natural places where air pressure builds.
The Coriolis Effect on earth is caused by the sun heating the air at the equator more than the air north and south of the equator. The hot air rises and expands, traveling north and south. As it cools, it descends, completing the circuit back to the surface of earth. Since the temperature inside the torus is presumably constant, these areas of high/low pressure air would not form, meaning that the Coriolis Effect would not happen.

Not the answer you're looking for? Browse other questions tagged science-based weather space-constructs .

12
What would the weather be like in an asteroid habitat?
17
What would it be like to live on a rapidly rotating planet?
11
What conditions would make rain possible in an O'Neill Cylinder?
2
How tall do atmosphere retaining walls on rotating space habitats need to be?
15
Prevailing winds on a rotating space habitat
7
A self-eclipsing orbital ring
18
How to make classical firearms effective on space habitats despite the coriolis effect?
12
Hurricane-force winds or gentle breezes in an O'Neill Cylinder?
2
How to Stop All the Wind on Earth
8
Ocean tides on a Banks Orbital