How long would this eclipse last?

For a moon orbiting a gas giant which is in turn orbiting a star, I want to know how long the eclipse would last for an observer standing on the moon when the planet passes between the moon and the star.

The actual values I intend to use in the end are likely to vary from these, somewhat, but I like simplicity so here's the parameters for this simplified version:

The planet = Jupiter radius, orbits the star at a distance of 1 AU (Earth's distance from the Sun) giving it an orbital year equivalent to an Earth year (or close enough to be a negligible difference, for simplicity)

The moon = orbits the planet at a distance of 4 million KM, which should give it an orbital time around the planet of about 42 days. It is not tidally locked and rotates on its axis at a rate that will make the same point on the surface face the star exactly once every 24 hours (again, for simplicity)

For simplicity (seeing the trend here?), assume all orbits and equators of all 3 bodies share a plane, and are circular, no eccentric or inclined orbits or tilted axes, etc., and the observer is standing on a point on the equator of the moon. Assume the eclipse "starts" when the star is directly over head (noon) of the observer, and the observer says in the same location until the eclipse ends.

Please let me know if I left out any necessary variables, I probably have them available and just forgot to include them or didn't realize they were necessary.

How long before the observer sees the star/sun again? (rounded or approximate answers would work, but the more precise the better, and an explanation of how the numbers were determined is also appreciated)

See the following diagram showing the position of the star $S$, the planet $P$ and the moon $M$ when the totality phase of the eclipse begins for an observer sitting on the surface of the moon; we consider that the planet and the moon orbit in the plane of the picture, and we are looking at them from the north celestial pole. 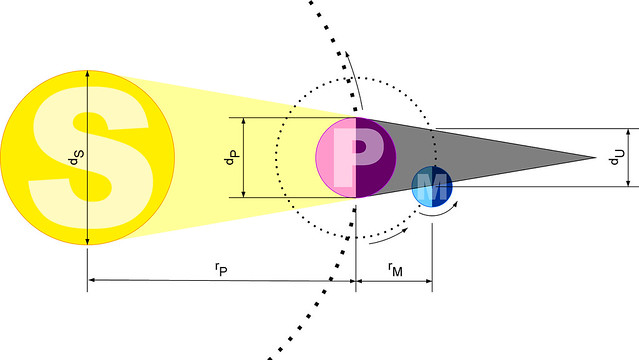 From triangle similarity we have

Plugging in the numbers

During this time the moon has rotated a bit, about 60 degrees, so that the observer is still in the shadow -- the moon must move on its orbit a distance of about two thirds of its radius to bring the observer into the light. Assuming that the moon has the same radius as the Earth, 6,400 km, this will take about 4,000 / 598,399 days or about 10 minutes.

So the grand total is 4 hours and 34 minutes of total eclipse.

P.S. What about the total duration from the moment the planet touches the sun to the moment the entire sun is again visible? Given that the radius of the orbit of the moon is much smaller than the radius of the orbit of the planet, the diameter of the penumbra is only a little larger than the diameter of the planet, or let's say some 160,000 km. The moon will traverse the penumbra (and the umbra) in about 6 hours 50 minutes. What this means that if the eclipse (partial + total) begins at noon chances are it will end after sunset...

Note that this post-scriptum is even more approximative than the calculation for the totality phase, but still good enough for fiction.

Using a completely comparative approach, rather than a direct calculation approach, here's my best answer:

Totality of an eclipse involving the actual Sun, Earth, and Moon can last up to 7 minutes and 31 seconds.

The orbital period of this moon around its planet takes about 1 1/3 as much time as it takes for the moon to orbit the Earth, so it seems reasonable to assume that it's apparent speed across the sky, and therefore across the front of the star, takes 1 1/3 as long. This increases the time of totality from 7.5 minutes to 10.

This is long enough for the Sun to have set, from the observer's location, before totality is complete, so the observer wouldn't see the Sun again until it rose the following morning.

19
Earth-like Moon around the Gas Giant. Eclipse length?
5
Creating "Sunfall" on the moon of a gas giant

4
Planetary system with a solar eclipse every day - need help designing
19
Earth-like Moon around the Gas Giant. Eclipse length?
2
How long is a solar-solar eclipse in a Binary Star System?
10
How would seasons work on a moon orbiting a gas giant orbiting a star?
2
Longest possible eclipse in double star system
9
How can an Earth-like moon meet these angular diameter conditions?
5
Is there a way for a permanent Lunar eclipse, or another Object to always be in Earth's shadow?
4
Is this habitable moon formation scenario plausible?
6
What would an eclipse with a translucent crystal moon look like?
6
How fast can a moon pass overhead?